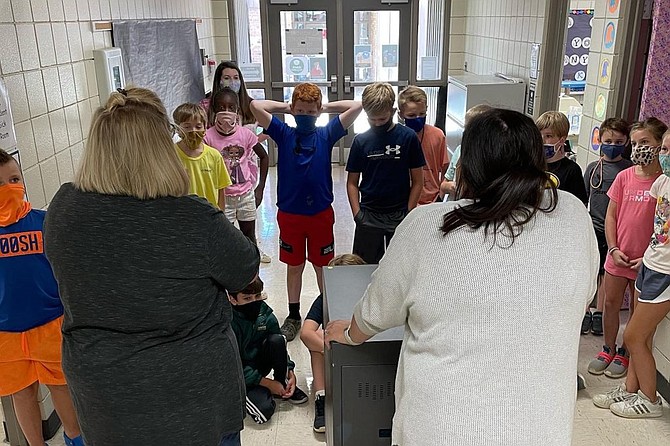 Students in the Rankin County School District will no longer have to wear masks after the school board decided to end the mandate during a Sept. 22, 2021, meeting. School board members cited declining COVID-19 cases since the mandate's enactment as justification for ending it. Children younger than 12 are not yet eligible to receive the COVID-19 vaccine. Photo courtesy Rankin County School District

A tale of two school districts is playing out in and around the Mississippi capital city. As Jackson Public Schools become one of the first in the state to mandate COVID-19 vaccines or weekly testing for employees, students in the nearby suburban Rankin County School District will no longer be required to wear masks.

The divergent paths of the two districts is emblematic of the patchwork of different policies that has often characterized Mississippi’s pandemic response since the beginning. After mandating masks in schools statewide this year, Gov. Tate Reeves said decisions on masking would be up to individual school districts this year.

Jackson’s public schools required students to wear masks from the first day of school when classes resumed in August, while Rankin County schools resumed classes on Aug. 6 with masks “highly recommended” but optional amid the delta variant’s rising wave. While some parents opposed masks, others spoke up and argued for a mandate in Rankin Schools prior to the start of the school year.

“Last year, I had kids who got sick at school and took COVID home, and their parents died from it,” WJTV quoted Northwest Rankin High School teacher Max Vanlandingham saying on Aug. 2.

By the end of the first full week, COVID-19 cases had boomed in Rankin schools, with 297 cases among students and 104 among teachers and staff. The suburban district reneged in the middle of the week, implementing a mask mandate on Aug. 10.

But yesterday, Rankin County School District officials said they decided to drop the mask requirement due to the fact that COVID-19 case numbers have improved since the mandate’s enactment.

Along with demonstrating the patchwork nature of Mississippi’s COVID-19 response, the split between Jackson’s city schools and the suburban Rankin County schools also demonstrates the state’s growing racial divide when it comes to pandemic response. Though the pandemic began with severe racial disparities that hurt Black residents the most, since last summer white Mississippians have accounted for a growing share of COVID-19 cases and deaths.

Black Mississippians accounted for only about 32% of COVID-19 deaths in recent weeks, while white Mississippians made up over 60% of those deaths, Mississippi State Department of Health data show. Census data indicate that 37% of Mississippians are Black, while 56% are white.

“In different parts of our population, I want to give … a remarkable shout-out to our black faith leaders who have done a phenomenal job. I think that, by and large, across the state of Mississippi, African American communities recognize the threat of COVID,” Mississippi State Health Officer Dr. Thomas Dobbs said during an episode of MFP Live last month.

“Now, we still don’t have enough folks protected with the vaccine, but if we look at the transmission that’s going on, since the early part of the pandemic, this has switched to a disproportionately, predominantly white disease in Mississippi.”

After this story first published, the Madison County School District, another suburban district around Jackson that is 63% white, also announced the end of its mask mandate policy. Superintendent Charlotte A. Seals said in a letter to families that the district had seen “the payoff of these (masking and social distancing) measures firsthand” and would be continuing to take “a data driven approach” to the pandemic.

“Over the last month, we have been pleased to see a significant decline in Covid-19 cases and quarantine across our campuses while observing Covid-19 Protocol Level 3. … The data now supports a change in our Covid-19 protocol level.”

Masks will become optional in school buildings starting on Sept. 24, she wrote, though they will continue to be required on school buses.

“It is our fervent hope that our Covid-19 numbers will remain low across the District in the coming days and weeks,” Seals wrote. “We will continue to closely monitor case numbers at each of our schools and remain ready to pivot should data support modifying our approach to Covid-19 on a campus-by-campus basis. … As we balance a greater sense of normalcy with continued concern for the health and safety of our students, we ask you to remain vigilant in stopping the spread of illness.”

Since classes began in August, the Madison County School District has reported COVID-19 cases among at least 412 students, or about 3% of the student body.