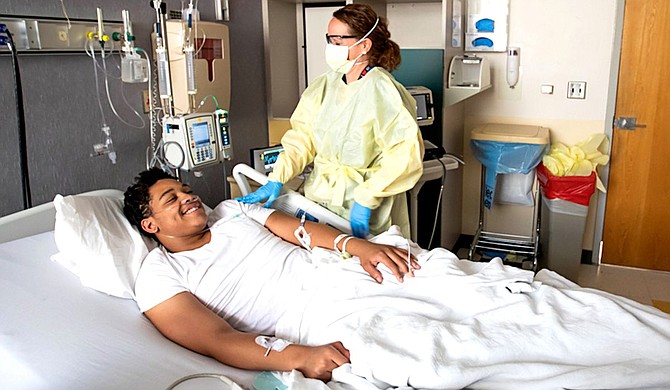 With both siblings wearing backpacks, Mkayla Robinson put her arms around her little brother, and the two smiled for a photo on Friday, Aug. 6., as they prepared to leave home to start her final year of junior high and his first day of kindergarten. But eight days into her eighth-grade year at Raleigh Junior High, Robinson died of COVID-19 on Saturday, Aug. 14, mere hours after testing positive for the virus.

Last week alone, 803 schools reported 4,521 positive cases among students. Schools have also confirmed 1,496 cases among teachers and educational staff this month so far. The situation and the deaths of at least two teenagers from COVID-19 since late July has led to increased calls for Gov. Tate Reeves to reverse his opposition to a statewide mask mandate and take aggressive action to stem the viral tide.

“I was thinking about your girls and all the other children I’ve ministered to, all the children I love who cannot yet be vaccinated against this deadly virus, and I am afraid for them, Tate,” the governor’s former pastor, Elizabeth Henry, wrote in an open letter to him that she posted on social media on Aug. 15. Mkayla Robinson, she noted, was close in age to one of his own daughters.

“And so I’m asking you, Tate, as the girls’ former pastor, to listen to these medical professionals. To take their wise counsel. To be open to the prompting of the Holy Spirit and the example of Jesus, and to be willing to learn and change and better love our neighbors in thought and word and action by implementing a statewide mask mandate,” Henry wrote to the governor.

‘Not Willing To Risk The First Child To This Virus’

The day before Robinson’s death, Reeves downplayed the risk to children and misstated the number of child deaths.

“Does it happen from time to time? Sure it does. I believe we have had one fatality of an individual, maybe it could’ve been two—I think there’s three under the age of 18 at this time? Two?” the governor said at an Aug. 13 press conference. He looked back at Mississippi State Health Officer Dr. Thomas Dobbs, who held up four fingers.

“Four so far and one this summer,” Dobbs told Reeves.

The next morning, Robinson died of COVID-19 complications while being transferred between hospitals. The Mississippi State Department of Health officially confirmed her as the state’s fifth child death from COVID-19. When classes at her school began on Aug. 6, masks were optional.

A day earlier, Bill Hardin, a school board member in Robinson’s school district, asked the Smith County School District superintendent to call an emergency meeting to address masks. On Monday, Mississippi Today’s Kate Royals reported that Hardin explained why he called the meeting in a Facebook post the day before school started.

“Based upon the daily increase of Covid cases within our county and the state as a whole, I will be making the motion that the board amend our previous position of optional mask wear and implement a mandatory mask wear of students and employees regardless of vaccination status while indoors on our campuses and follow to the best of our capabilities the most recent guidance from the Mississippi Department of Health received on Friday, July 30th,” Hardin wrote in a Facebook post on Aug. 5.

“… Based upon what I’m both hearing and reading, this variant is more contagious than the other and is affecting a younger population. I personally am not willing to risk the first child to this virus if we could have done something to try and prevent it.”

Later that day, Hardin announced that his motion had failed. Mkayla Robinson and about 2,600 other students in the district returned to class the next morning. The school board changed course after three days of classes and decided to mandate masks on Aug. 10. It is not clear when Robinson contracted the illness, but sources told the Mississippi Free Press that she was in school and apparently unaware of her COVID-19 illness as recently as Wednesday, Aug. 11.

School districts statewide have responded to mounting cases and outbreaks with a patchwork of remedies, with many reimplementing mask mandates or moving to all-virtual instruction.

“What we’re finding is in a lot of schools are picking and choosing through these recommendations in a cafeteria-style approach,” Associated Press reporter Leah Willngham quoted Mississippi State Epidemiologist Dr. Paul Byers saying today. “The intent of this is really it needs to be all of these layers in order to prevent transmission.”

Since the beginning of August, schools have quarantined at least 24,769 students for COVID-19 exposures, including 20,334 this week alone. During the first two weeks of 2020, schools quarantined just 2,035 students. Public-health leaders have repeatedly warned that the delta variant is far more contagious than earlier iterations of the virus and possibly more dangerous for children, including healthy young people.

“In the 2020 version of COVID-19, most children infected did not show symptoms that developed into serious health conditions. That’s not the case today, as nationally and in Mississippi, the Delta variant of COVID-19 is driving up the number of children hospitalized at Children’s of Mississippi,” the University of Mississippi Medical Center said in a news release yesterday.

The Children’s of Mississippi, the state’s only pediatric hospital, is currently full of children sick with COVID-19, including several on ventilators for life support.

“Please protect our children now,” Dr. Anita Henderson, the president of the Mississippi chapter of the American Academy of Pediatrics, wrote in a tweet on Sunday. “Mississippians please get vaccinated, wear a mask, avoid unnecessary activities because ICUs, ERs and hospitals ARE FULL.”

Dr. Anita Henderson will join MFP Live on Thursday, Aug. 19, at 6 p.m. central to talk to Publisher Kimberly Griffin and Editor Donna Ladd about her COVID-19 safety concerns and advice for families with children. (The show is live on YouTube here.) The public can submit questions for Dr. Henderson at this link.

Follow the Mississippi Free Press on Twitter at @msfreepress for breaking news and visit its COVID-19 reporting archive here.