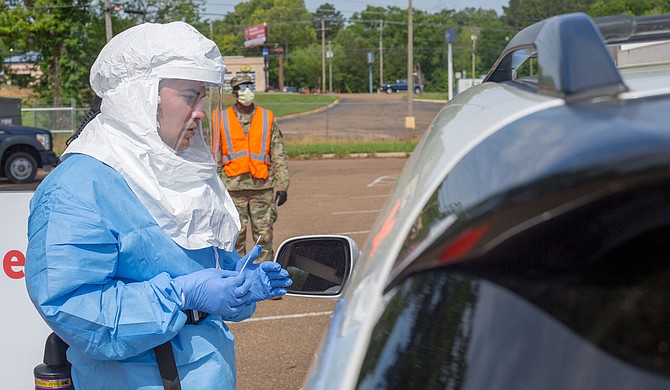 People can call or go online to schedule COVID-19 vaccinations through the Mississippi Health Department. The department's communications director, Liz Sharlot, said Tuesday that the phone script that employees and contractors are supposed to read “can be confusing" and is being changed because of what happened to the Rev. Wayne. National Guard Photo by Spc. Jovi Prevot

JACKSON, Miss. (AP) — The Mississippi Health Department is rewriting a “confusing” script that employees and contractors read to people scheduling COVID-19 vaccination appointments by phone after a professor said her father called and a scheduler disparaged the effectiveness of the Moderna vaccine, a department spokeswoman said. Mississippi Free Press first reported the story Tuesday.

Elizabeth Wayne is a professor of biomedical engineering and chemical engineering at Carnegie Mellon University in Pittsburgh. She told The Associated Press on Wednesday that her father, 64-year-old Bobby Wayne, of Clarksdale, is a retired minister who is paraplegic and has leukemia and prostate cancer.

She said her father called a Mississippi Health Department number multiple times to try to schedule a vaccination for himself, and a woman he talked to Monday incorrectly told him “there's no documented proof” that the Moderna vaccine works and asked him: “Do you still want to take it?”

Wayne said her father did not schedule an appointment then but told her about the call. Wayne said she does not doubt what her father heard.

“He has all these problems, but his ears are great,” she said Wednesday.

“This is the Mississippi Health Department. I’m in disbelief," she tweeted Monday, also describing her father’s treatment from the appointment scheduler as “violence.”

Wayne told the AP that her father called the Health Department again Tuesday and spoke to a different person who did not question the efficacy of any vaccine. She said he set a vaccination appointment.

People can call or go online to schedule COVID-19 vaccinations through the Mississippi Health Department. The department's communications director, Liz Sharlot, said Tuesday that the phone script that employees and contractors are supposed to read “can be confusing" and is being changed because of what happened to the Rev. Wayne.

Part of the old script said: “Do you still want to be vaccinated with an understanding there are currently no available data on the safety or effectiveness of COVID-19 vaccines, including Moderna COVID-19 vaccine, in pregnant people, lactating people, or immunocompromised people?”

Wayne said her father did not recall hearing the part about people being pregnant, lactating or immunocompromised, so she didn't know if the scheduler might have strayed from the script.

Sharlot said in an email Tuesday: “We are replacing this confusing and misleading language. ... Both Moderna and Pfizer have high efficacy rates.”

The state health officer, Dr. Thomas Dobbs, said Tuesday on Twitter that the Health Department would investigate what happened with Wayne's father. Dobbs also tweeted a quote from the New England Journal of Medicine that the type of vaccine made by Moderna “showed 94.1% efficacy at preventing Covid-19 illness, including severe disease. Aside from transient local and systemic reactions, no safety concerns were identified.”

Elizabeth Wayne on Wednesday praised the Health Department's response: “They took this seriously, and that was good.”

Republican Gov. Tate Reeves said Monday that Mississippi has administered more than 1 million COVID-19 vaccinations. The state has a population of about 3 million.