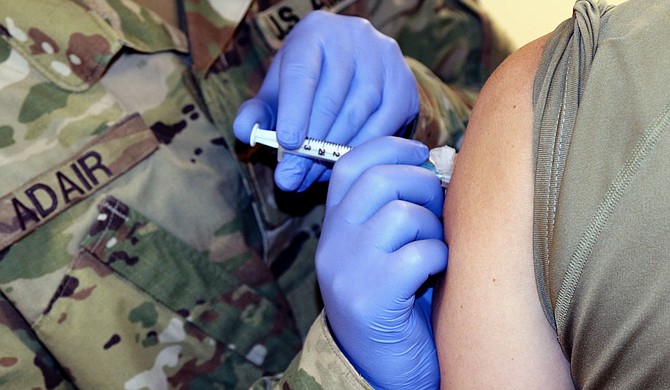 The Mississippi Health Department said Wednesday that the state cannot take any more appointments for COVID-19 vaccinations because of a “monumental surge” in demand after Gov. Tate Reeves announced that more people were eligible. U.S. Army National Guard Photo by Sgt. Scott Tynes

JACKSON, Miss. (AP) — The Mississippi Health Department said Wednesday that the state cannot take any more appointments for COVID-19 vaccinations because of a “monumental surge” in demand after Gov. Tate Reeves announced that more people were eligible.

Officials said all doses of the vaccine are matched with appointments that have been booked. Reeves announced Tuesday that the state was making vaccinations available to anyone 65 and older or people of any age with underlying health conditions.

Before the governor’s announcement of expanded availability, doses were already available for health care workers, people living in long-term care facilities and anyone 75 and older.

People already scheduled for their first or second shot in the coming weeks will still be vaccinated. Officials hope Mississippi will receive a large shipment of vaccines in mid-February. That would allow new appointments to be made.

“Neither the county health department drive-through sites, nor the ... vaccine scheduling website was designed to accommodate the monumental surge we are currently experiencing,” according to a Health Department news release Wednesday.

The release also said that department officials “understand the frustration brought on by this sudden change of plans.”

Earlier Wednesday, the Republican governor received his first dose of the coronavirus vaccine on a video streamed to Facebook Live. Reeves said he wanted to take the vaccine publicly to demonstrate his “confidence in its safety and efficacy.”

“We've heard from a lot of Mississippians who are concerned about taking the vaccine and what we've tried to do, over the last several weeks, is remove roadblocks,” Reeves said, standing in the Governor's Mansion with the state health officer, Dr. Thomas Dobbs.

Reeves, 46, said he doesn't want any doubt that he supports the vaccine.

Wearing a face covering depicting the American flag, Reeves sat in a chair while a nurse administered the shot. He received the Moderna vaccine, developed with U.S. National Institutes of Health.

“I’m not a great patient, and so I don’t love shots," he joked. "But I know that this is the thing to do, and it’s going to help protect me, but also help protect our loved ones.”

Dobbs said the virus is still taking the lives of many Mississippians. He said during a briefing Tuesday that he had lost several friends in the past week because of coronavirus complications.

A member of the state Board of Health, Dr. Ed Dalton Barham of Clinton, died of COVID-19 complications Saturday, according to an obituary. He was 79.

“He felt it was a privilege and an honor to serve in a leadership position to help promote public health in Mississippi,” his family wrote in his obituary.