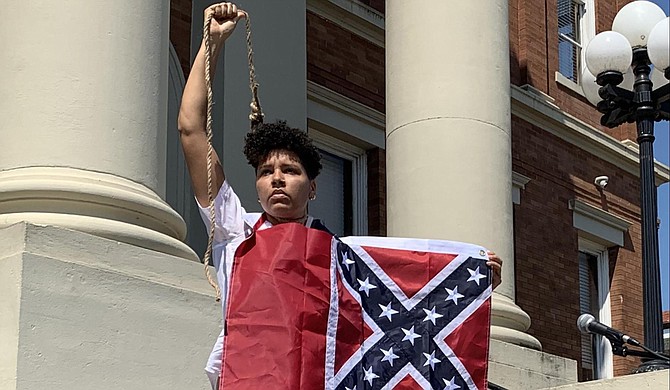 The path that brought rapper and activist Genesis Be to a New York City stage, her body draped in a Confederate flag and a noose hung around her neck, was a long one. Photo courtesy Lea Campbell

NEW YORK (AP) — The path that brought rapper and activist Genesis Be to a New York City stage, her body draped in a Confederate flag and a noose hung around her neck, was a long one.

Growing up in Mississippi, that flag seemed to be everywhere.

It was at her elementary school in Biloxi named after Jefferson Davis, the leader of the Confederacy, and when her middle school took her to his library/home on a field trip.

It was there when she walked on stage at her high school graduation, when she attended Jefferson Davis Community College, and on the upper-left corner of the Mississippi state flag, where it was embedded by white supremacist lawmakers in 1894.

It was even one of her earliest memories. She first saw the Confederate flag -- the red field topped by a blue X with 13 white stars — at age 5 when her father took her to a Ku Klux Klan rally. He wanted her to see up close the people who hated them just for being Black.

“For him, it was tying our understanding of our family history to the present,” said Genesis Be.

“He wanted to make it more real for us -- like, this isn’t just something that people fought against in the past. Racism is alive and well.”

Mississippians voted to keep the flag in a 2001 statewide election, with supporters claiming that it was a symbol of heritage. For Genesis Be, the turning point came 15 years later when then-Mississippi Gov. Phil Bryant proclaimed April as Confederate Heritage Month, as the Jackson Free Press first reported.

She was fed up. On April 26, 2016, she took to the stage of a New York music venue, wearing the flag and noose in protest. Her performance drew headlines -- and a backlash, followed by threats.

And so began Genesis Be’s part in the campaign against the most common symbol of the Confederacy.

It seemed impossible at the time, but this year protests over racial injustice in the U.S led Mississippi to reject its flag and the Confederate battle emblem embedded in it.

A Family of Human Rights Activists

Genesis Be comes from a family of human rights activists. Her grandfather, the Rev. Clyde Briggs, fought for education and voting rights for Black people in the 1960’s. Some Klan members fired shots at his home, while his pregnant wife and children were present. Genesis Be’s father, Ishmael Briggs, was 5.

“At any point in our family, someone could have just been like, you know, that’s not my issue anymore,” the 33-year-old said. “But each generation, there has been someone to pick up the torch.”

Ishmael Briggs went on to become a Baptist preacher and an activist. Before he married Genesis Be’s mother, Lisa Schmitz, a white, Catholic nurse from Wisconsin, they converted to Islam.

“We were taught about the Quran, but also about the Gospel and the Torah,” said Genesis Be, who follows Sufism, the mystical branch of Islam, and attends the Middle Collegiate Church in New York’s East Village.

“And we would have really hard conversations all the time ... around race and around stereotypes and bias and sexism and homophobia.”

From an early age, she wrote poetry. Inspired by Tupac Shakur’s album “2Pacalypse Now,” she turned her poems into rap. “He was talking about social issues in his community, telling a story with poetry over a beat,” she said. “And I was sold for the rest of my life.”

At the age of 14, she released her first album. She also combined her art and activism, writing hip-hop music for several organizations about HIV awareness, anti-bullying and autism.

When she moved to New York for college, Genesis Be founded Strive Till I Rise, an initiative that creates art exhibits, hip-hop and plays to challenge racial bias and encourage young people to vote.

“But the flag that welcomed me home continued to remind me that my work was not wanted and my body was not safe in my home state,” she wrote for the Mississippi Free Press.

After her stage performance went viral, she gathered a group of high school friends and other Mississippians in 2017 to discuss the state flag. Among them were Black people who saw it as a symbol of racism and white people who recalled ancestors who fought for the Confederacy. One of them, eventually changed his mind and took his flag down.

“She’s trying to find peace. She’s not trying to disrespect anybody’s ancestors,” her childhood friend, Louis McFall, says in 'Should the Confederate Flag Still Fly in Mississippi?' a documentary. “Why should she not be represented by a flag that others are?”

Genesis Be is on a tour of red states with the Vote Common Good nonprofit, joining religious leaders who appeal to Christian voters to vote with morality before party allegiance in November’s election.

On a recent day, she told a crowd at the Black Lives Matter Plaza near the White House about a fight that carried on through generations and she reminded them of a victory that brought down the Mississippi flag.

In the end, she performed “Mississippi The Microcosm of America.” She had recited the poem countless times, but this time, it felt more emotional and powerful.

“To be in front of the White House, which I state in the poem is painted in the Klan’s ideology, and to see Black Lives Matters Plaza in person, it felt like a sacred space and a sacred moment,” she said.

“I’m seeing America change before my eyes. Having seen that flag come down, I bear witness because Mississippi is a microcosm of America.”