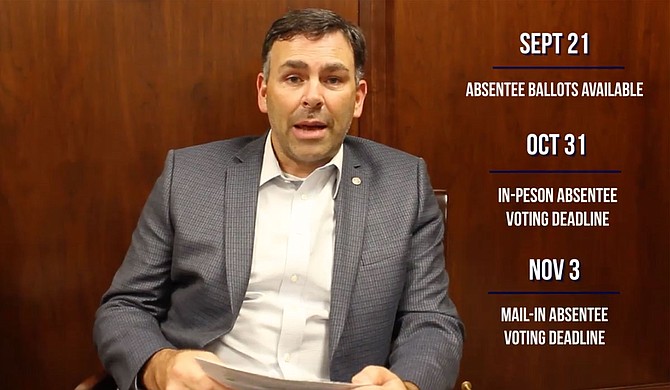 JACKSON, Miss. (AP) — Mississippi voters with health conditions that might make them vulnerable to COVID-19 must be allowed to vote by absentee ballot, a state court judge has ruled.

However, the judge rejected an argument that people without pre-existing conditions should be allowed to vote absentee if they are following public health guidelines to avoid large social gatherings.

Secretary of State Michael Watson said Thursday that he is appealing Owens' order to the state Supreme Court. He said in a statement that he wants clarification so circuit clerks can know what does or does not qualify as a “temporary disability” under the state law that governs absentee voting.

“The goal is to make sure the application of the term is consistent for every Mississippi voter,” Watson said.

Attorneys from the American Civil Liberties Union of Mississippi and the Mississippi Center for Justice filed a lawsuit Aug. 11 against Watson, who is the state’s top elections officer, and against circuit clerks in Hinds and Rankin counties, who oversee elections in those places. The lawsuit was filed in Hinds County because it’s home to the seat of state government.

The lawsuit said Mississippi’s absentee voting law is confusing and could be applied inconsistently during the coronavirus pandemic. It sought a statewide declaration that would allow absentee voting by people with health conditions that could put them in extra danger because of the highly contagious virus. Plaintiffs include people who have had cancer or who have other conditions, including lupus and asthma.

“We are certainly pleased that the judge has recognized the danger that in-person voting poses for people with pre-existing conditions, and we think she is right to hold that under Mississippi law they are permitted to vote absentee,” Mississippi Center for Justice attorney Rob McDuff said Thursday.

McDuff said plaintiffs will ask a higher court to overturn the part of Owens' order that went against them.

Other groups filed a similar lawsuit Aug. 27 in federal court.

Mississippi does not allow widespread early voting. Instead, state law says absentee voting is available to anyone who is 65 or older, or for voters of any age who are permanently disabled or will be out of their home county on election day. People who have to work on election day when the polls are open also are allowed to vote absentee.

The lawsuit noted that Watson said in news release in May that he and his office “do not believe voters should have to choose between casting a ballot and risking their own health.” But it also points out that Watson told legislators in June that local election officials are smart enough to figure out which people should be given mail-in absentee ballots. Watson made both statements before legislators made the temporary change to the law.