Flourishing in Spite of a Flood 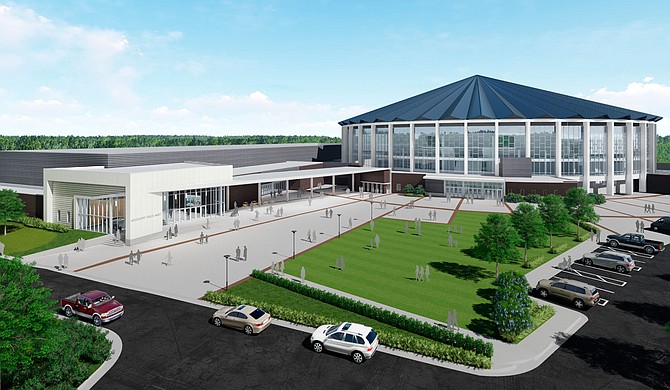 This rendering depicts the remodeled Mississippi Trade Mart building, which should be completed and open for business by June 2020. Photo courtesy Wier Boerner Allin Architecture

With every issue of BOOM Jackson, we like to reflect on the progress and developments that have occurred over the last quarter. From renovations to flooding, these last three months have seen a lot.

The new Mississippi Trade Mart in Jackson is on schedule for completion by June 2020, Steve Hutton, executive director of the Mississippi Fair Commission, told the Jackson Free Press. The MFC decided to raze the original 75,000-square-foot Trade Mart building, which was constructed in 1975, in November 2017 because the building had an outmoded, flat roof that leaked.

MFC held a groundbreaking ceremony for the new Trade Mart in March 2018. The state Legislature authorized $30 million to build the new, 105,000-square foot Trade Mart and to make improvements to the Mississippi Fairgrounds. The remodeled facility will be attached to the east side of the Mississippi Coliseum.

Among the improvements to the facility, Hutton says, are new bathrooms, larger corridors, meeting rooms, a grand foyer and a new commercial kitchen for the fairgrounds.

"The new Trade Mart building being connected to the Mississippi Coliseum is basically going to create one large building, so events such as Mistletoe Marketplace will be able to expand onto the coliseum floor," Hutton told the Jackson Free Press.

The Community Foundation for Mississippi in February gave the City of Jackson a $125,000 grant for the construction of the Museum Trail, a 2.5-mile walking, running and biking trail connecting the Two Museums in downtown Jackson, the Mississippi Museum of Natural Science and the Mississippi Farmers Market.

Clay Hays, president of Jackson Heart Clinic and former chairman of the Greater Jackson Chamber Partnership, told the Jackson Free Press that he has been working with the museums and the Mississippi Department of Transportation to head up the development for more than eight years. The Jackson City Council formally approved the project in November 2019, and Hays says construction is set to finish by spring 2020.

Located on what was once an abandoned railroad track, the trail will eventually include amenities such as park benches, water fountains, a water station for people exercising, elevated overlooks and more. The trail will not have outdoor lighting and will close to the public at dusk, Hays says.

"I'm a cardiologist, so the importance of fitness was a strong motivator to create something like this for Jackson, especially in the state that is number one in obesity in the nation," Hays says.

"Other cities around the nation have similar safe places for exercise like this, and we should too. The trail will be great for improving quality of life in Jackson."

In 2017, CFM supported the Two Museums with a $750,000 donation to the Museum of Mississippi History. A bequest from John F. and Lucy Shackelford funded donations to both the Museum Trail and Two Museums projects.

Jackson State University opened its new Center for Innovation on the second floor of the H.T. Sampson Library on Thursday, Jan. 30.

The center includes Oculus virtual reality technology, 3D printing facilities, a soundproof room with green screens for podcasting and filming and more, which will be used to introduce students to these technologies. The facility also offers advice to students on technology transfer for moving products and ideas to the market, a release from JSU says.

The center is part of the Young Innovators Program, a partnership between the center, the JSU Academic Affairs department and Blackburn Middle School in the Jackson Public School District.

The Belhaven Town Center, an ongoing development across two city blocks on Manship Street near Belhaven Heights, recently saw the opening of one of its newest tenants, Elvie's restaurant. Hunter Evans opened the restaurant inside a remodeled house in February.

Mitchell Moore, owner of Campbell's Bakery (3013 N. State St.), previously set up his own new shop, Campbell's Craft Donuts, inside the Belhaven Town Center in November 2019. Both buildings had been long abandoned  prior to the new development.

The Greater Belhaven Foundation first announced plans to construct the Belhaven Town Center in fall 2018. When it is finished, the Belhaven Town Center will be an 117,000-square foot, mixed-use residential and commercial site with an outdoor courtyard and parking spaces. Development will include both new construction and renovation of existing structures in the area. David Turner, owner of David Turner Companies (147 Republic St., Madison), is heading up the construction.

Ruffin Lowery, developer and manager for the Belhaven Town Center, told the Jackson Free Press that the center still has space for four more buildings. Among the planned facilities, Lowery says, are Spectrum Sip, a nutritional energy shake shop, a dentist office with two floors of one-bedroom apartments above it, and a brew pub on the east side of Manship Street inside a building that once housed laundry facilities for Baptist Hospital. The building Campbell's Craft Donuts occupies will also have office space available for lease.

The next phase of development will focus on The Haven, a combination green space and outdoor entertainment area that will have a stage and four small, cottage-style buildings for retail shops. Ruffin says development of the next phase is set to begin by spring 2020, and should be completed by October 2020.

The Jackson flood of 2020 entered the record books on Feb. 16. The Pearl River crested at 36.7 feet, the third highest flood stage in recorded history. 87 structures flooded, all located in north Jackson. Across the metro, the flood caused mandatory evacuations, with about 500 homes affected in total. Public officials and emergency responders arrived before the flood to evacuate residents from at-risk streets.

Hinds County Emergency Operations Center Director Ricky Moore told the Jackson Free Press that estimating the cost of the flood in dollars is difficult at this stage.

"I'm not sure what that bottom line figure is going to be now," he said. But he was pleased to confirm that no reports of injuries or deaths occurred during the floods. Emergency responders, including the Mississippi Department of Wildlife, Fisheries and Parks' Special Response Team, made a number of quick extractions of stranded residents without error, Moore reported.