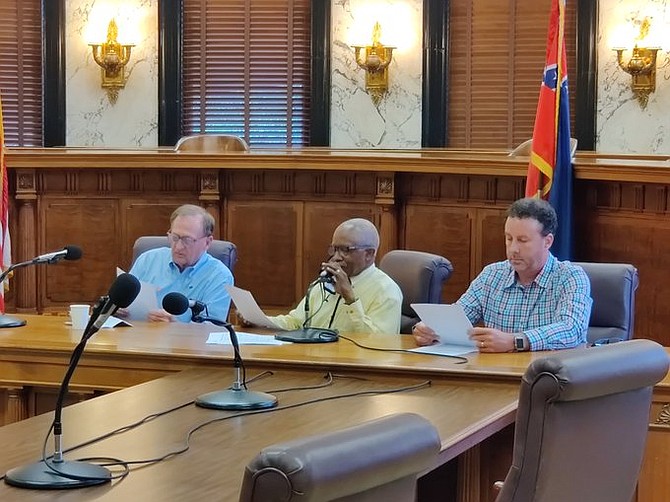 Democratic state Sen. Hillman Frazier of Jackson served on a commission in 2000 that held public hearings about whether to change the flag. Here he sits (center) on the Senate rules committee in 2020. Photo by Nick Judin.

JACKSON, Miss. (AP) — The Confederate battle emblem on the Mississippi flag evokes strong emotions, and for decades it has been a volatile issue that many state legislators wanted to avoid.

Momentum shifted quickly in recent weeks. Amid widespread protests over racial injustice, debate intensified over Confederate symbols, including the Mississippi banner that's the last state flag with the rebel symbol — a red field topped by a blue X with white stars.

Influential leaders from business, religion, education and sports urged state officials to change the flag and remove a symbol that many condemn as racist. House and Senate leaders built a bipartisan coalition of legislators willing to make the change.

Democratic state Sen. Hillman Frazier of Jackson served on a commission in 2000 that held public hearings about whether to change the flag. State residents yelled at each other and at the commissioners. African American commissioners, including Frazier and Democratic state Rep. Ed Blackmon of Canton, were particular targets of ire. Blackmon said they received death threats.

On Saturday, as the Mississippi Senate prepared to adopt a resolution allowing a bill to be filed to remove the Confederate emblem from the flag, Frazier rose to speak. In a steady voice, he told his colleagues: “Pray first. Aim high. Stay focused.”

White supremacists in the Mississippi Legislature set the flag design in 1894, during backlash to political power that African Americans gained after the Civil War. The flag’s current defenders say they see it as a symbol of heritage, not racism.

The concept of legislators debating the state flag was not predictable, even at the beginning of this year. Many have said for years that they were unwilling to change the flag themselves because people who voted in a 2001 statewide election chose to keep it.

Legislators have the power to choose state symbols, but those holding office in 2001 set the special election because they did not want to decide the issue themselves after the contentious public hearings.

Andy Taggart of Madison ran for Mississippi attorney general in 2019, losing in the Republican primary. Taggart said, early and often, that the state should remove the Confederate symbol from its flag because many people find it hurtful and divisive.

In a social media post Friday, Taggart recalled that a woman told him during a campaign event:“'You want to take away our flag.'"

Although state symbols are not a federal issue, the Mississippi flag is grabbing attention in a U.S. Senate race this year as Democrat Mike Espy again tries to unseat Republican Cindy Hyde-Smith. He lost to her in a hard-fought special election in November 2018.

In the late 1980s, Espy became the first African American since Reconstruction to represent Mississippi in the U.S. Congress. In 1993, President Bill Clinton named him U.S. agriculture secretary.

Espy was at the state Capitol last week standing with dozens of African American religious leaders who called on legislators to remove the Confederate symbol from the flag. He applauded as they spoke.

After the event, Espy told The Associated Press that Hyde-Smith had failed to take a clear position.

“I appreciate the views of all Mississippians, and hope to continue Mississippi’s forward momentum,” Hyde-Smith, who's a former state senator and state agriculture commissioner, said in a statement. “Should the people of Mississippi and their elected leaders decide to begin the process of finding a more unifying banner that better represents all Mississippians and the progress we have made as a state, I would support that effort.”