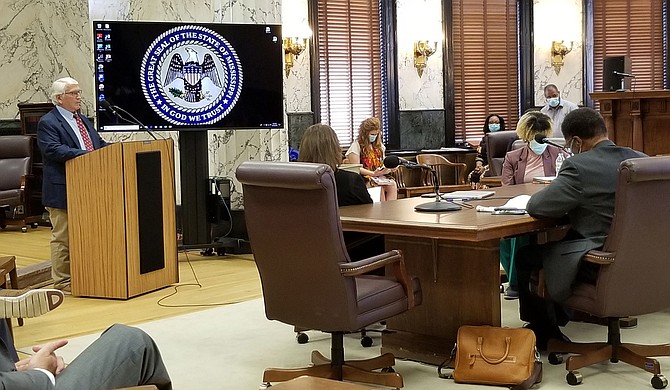 Burl Cain, ex-warden of Angola prison in Louisiana, was speedily and unanimously recommended for confirmation as commissioner of the Mississippi Department of Corrections. Photo Courtesy MDOC

UPDATE: Burl Cain is the new Commissioner of the Mississippi Department of Corrections today, confirmed by the full Senate one day after a 30-minute Corrections Committee hearing unanimously recommended his confirmation. Cain inherits a Mississippi prison system in crisis: at yesterday's committee hearing, the new commissioner promised to rehabilitate the infamous Mississippi State Penitentiary at Parchman, release COVID-19 numbers from the state's inmates and corrections employees, and claimed total exoneration for the allegations that ended his tenure at Angola Prison in Louisiana.

A lightning-quick committee hearing placed ex-Angola warden Burl Cain on track to command the Mississippi Department of Corrections yesterday. The Mississippi Senate Corrections Committee members brushed aside press reports of Cain’s alleged financial misdealings in Louisiana and allegations about treatment of black inmates, instead focusing on their hopes for the new commissioner turning the agency around after a winter of fatalities inside the state’s prisons.

Senate Minority Leader Derrick Simmons, D-Greenville, reminded the incoming commissioner that Mississippi was one of the two states not openly reporting its COVID-19 numbers in its state prisons. Cain committed to publishing all COVID-19 statistics in MDOC prisons on his first day on the job.

Cain said he would not, however, contemplate shutting down the Mississippi State Penitentiary at Parchman, the beleaguered state prison and site of many of the prisoner deaths late in 2019 and early this year. To close down Parchman meant to admit defeat, Cain said, a prospect he was unwilling to consider.

The committee did not dwell on the accusations that cost Cain his career as warden of Angola prison. “The information that I’ve looked at satisfies me (about) the concerns that have been raised in the media,” Brice Wiggins, R-Pascagoula, said today. “You know what I’m talking about, right?”

“I was investigated with three investigations, and the allegations were found to be totally unfounded,” Cain responded.

“We’ve been provided information that corroborates that,” Wiggins said.

The hearing did not touch upon the specifics of the allegations, which include business dealings with the family members of Angola inmates, and the use of prison employee labor on Cain’s personal home.

Cain did, in fact, participate in real-estate dealings with an inmate’s family during his tenure as warden of Angola. An internal review then “clarified” the rules barring personal relationships with the families of inmates.

The rule was not intended to prevent financial gain on the part of Louisiana’s corrections officers, Bickham said. Rather, “the longstanding consensus in the department of this rule is that it is intended to prohibit an employee from entering into a secretive personal and/or romantic relationship with an offender or member of that offender’s family.”

Sen. Sollie B. Norwood, D-Jackson, asked Cain if he intended to maintain his board membership at the Louisiana Department of Corrections Credit Union. Cain said he would, and further expressed a desire to see that institution expand to Mississippi.

“I am chairman of that board. We are exploring the possibility that that credit union might function for the Department of Corrections in Mississippi. We find that corrections employees normally have lower credit scores, unable to sign financing … that credit union meets that need,” Cain said.

Simmons told the Jackson Free Press in an interview that Cain should avoid even the appearance of impropriety during his time at MDOC, but added that he was satisfied with the evidence that Cain had been exonerated, an opinion the entire committee shared.

Still, Simmons had a warning for Cain. “I would say two words to Burl Cain if he plans to come to Mississippi and do anything close to what he was accused of in Louisiana: Shad White.”