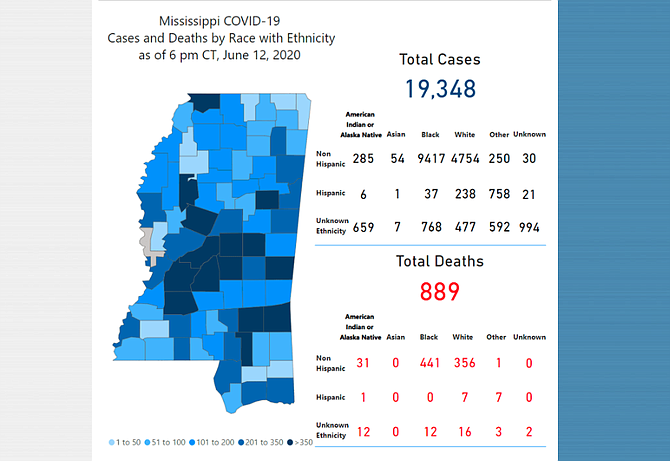 Average daily cases of COVID-19 in Mississippi have hit a new high.

Mississippi this past week reached a new high in the COVID-19 pandemic, averaging 330 new people per day identified as infected with the virus. (We compute our average based on the numbers that the Mississippi State Department of Health reports each week from Sunday-Saturday to account for any variance in testing volume that may occur on different days of the week.)

Saturday's report of Friday's totals came in below that average, at 257 new positive tests. MSDH reported that eight more people have died from COVID-19 related illnesses; four of those deaths from May 25 and June 4.

Citing technical problems, MSDH skipped their Thursday report and reported two days' worth of numbers on Friday, revealing 608 new people tested positive and 13 people died from illnesses related to the virus on Wednesday and Thursday.

On Monday of this week, the MSDH reported the largest one-day total of positive test results since the outbreak began, at 498 people testing positive for COVID-19. On June 11, MSDH reported the highest number of patients in intensive-care units, at 172. That number was down to 160 on Friday.

Monday's report came exactly two weeks after Memorial Day, and one week after Governor Tate Reeves' "Safe Return" order for Mississippi to enter the "final stages" of reopening its economy went into effect.

The average number of COVID-19 cases swung back up this week, although the number of deaths is relatively steady.

Previously, Reeves had stated that he thought Mississippi would be on a "plateau" of cases as the economy began to open up. While the number of confirmed cases has continued to rise, reported deaths from related diseases have remained relatively flat. Hospitalization numbers are high but haven't trended dramatically upward.

The tri-county Jackson Metro has seen a total of 2,676 reported cases, with Hinds and Madison counties at #1 and #2 in the state. Madison shares #2 with Neshoba County; both counties have reported 877 cases since the outbreak began. Thirty people have died in Madison County; 50 have died in Neshoba County.

Lauderdale County is the only county where more people have died than in Neshoba County, as 75 have passed away from COVID-19 related illnesses. Lauderdale reported some of the earliest cases of COVID-19, and it currently has the highest number of cases in long-term care facilities, at 181.

Read the JFP’s coverage of COVID-19 at jacksonfreepress.com/covid19. Get more details on preventive measures here.