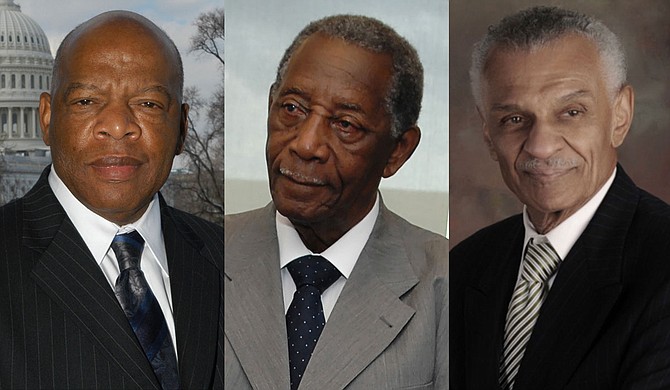 Congressman John Lewis, Mayor Charles Evers and Rev. C.T. Vivian set a high and necessary standard for new generations, columnist Duvalier Malone argues. The rest of us must pick up their torches. Photo credit US House of Representatives, US Navy, and courtesy C. T. Vivian

It is with distinct sadness and difficulty that I write this column in memory of Congressman John Lewis, Mayor Charles Evers and Rev. C.T. Vivian. It's hard to condense my thoughts about these three icons into a short column, but I will try.

It seems that we are losing our civil-rights champions at an alarming rate. This is why it's important that we mark their passing not only with sadness and honor, but with a renewed and committed vigor to defending what each of them represented.

With them gone, it's up to us to now ensure that their legacy remains respected, intact and safe from those who may want to tear down the accomplishments of these great men to replace them with figures of hate and division.

At the apex of their lives, Lewis, Evers and Vivian were fighters who didn't mind placing their lives in danger for their people. I've often looked to these champions and hoped that I could display just a quarter of the courage that they lived every single day of their lives.

These civil-rights heroes paved the way for Black people to be where we are now.

Could Keisha Lance Bottoms be the mayor of Atlanta had it not been for Charles Evers becoming the first Black mayor of Fayette, Miss.?

Would Colin Kaepernick have taken a knee for justice had C.T. Vivian not first taken a seat during the sit-in protests in Nashville, Tenn.?

Would Senator and then President Barack Obama exist had it not been for John Lewis working to bridge the racial divide in America?

I can say for sure that I wouldn't be where I am today had it not been for them and their accomplishments.

Mayor Charles Evers was a mentor of mine. In my book, "Those Who Give a Damn,” I talk in-depth about the impact that Mr. Evers made on my own life.

I'm a native of Fayette, the town that elected Charles Evers, and made him the first Black mayor in America since Reconstruction.

When I was growing up, Charles Evers was a larger-than-life figure, and he was regarded as a hero to many Black people who had long wished for a champion who would represent them and their interests. He was loud, and he wasn't afraid to shake up the status quo—and whether you agreed with him or not, he stayed true to himself.

The Rev. C.T. Vivian served as a confidante of Dr. Martin Luther King Jr. Dr. King often looked to Rev. Vivian to be one of the angels on his shoulder, helping to advise him on what the next step should be in the fight for justice for Black people in America.

He was a witness to one of the most important events in American history: the passage of the Civil Rights Act.

As both a religious man and freedom fighter, Rev. Vivian wove together two roads and walked that seamless path, and then he trained others to continue the fight for justice. After gaining acclaim as an advisor to Dr. King, Rev. Vivian went on to counsel at least four presidents regarding racial justice.

Congressman John Lewis was widely regarded as the conscience of America. Beginning as a foot soldier in the fight for justice, his battle during the Civil Rights Movement heralded the change of the hearts and minds of many white citizens in the South.

As John Lewis walked across the Edmund Pettus Bridge, he faced down injury and possible death to do what he felt in his heart was right. Not one person could question his loyalty and commitment to the cause for which he literally bled.

The iconic images of a young John Lewis facing down mobs of angry, white police officers have been reprinted and republished for decades. We all know the story of the conflict and danger that he faced. And he survived it and went on to become a U.S. congressman, still working to change the system in an effort to include all citizens of America, no matter their race.

In recent years, Congressman Lewis encouraged many, including myself, to get out and make good trouble. He told us that it was OK to get in the way, if we were doing it for a cause bigger than ourselves. John Lewis understood that power concedes nothing without a demand, and so he told us to make demands and to do it LOUDLY.

As we lay these great men to rest, we will spend a lot of time discussing their legacies and the impact that they had on the direction of both American politics and American life. But as we focus on them and the past, let's not forget that the fight isn't over.

Now that they have put down the torch, it's up to each of us to pick it up and carry it forward, holding it high in their memory. Let's display the same selflessness and courage that each of these men showed, and let's work to make our nation better tomorrow than it is today.

Duvalier Malone is the author of "Those Who Give A Damn: A Manual for Making a Difference," a motivational speaker, community activist and CEO of Duvalier Malone Enterprises, a global consulting firm. He native Mississippian and now lives in Washington, D.C.