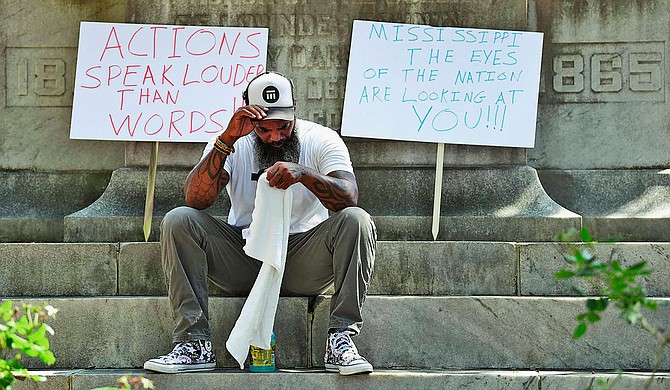 At least four Mississippi counties have decided recently to move Confederate monuments away from courthouses as widespread protests over racial injustice are renewing debate over symbols that many consider divisive. Photo courtesy Claire Hassler/The Commercial Dispatch via AP

JACKSON, Miss. (AP) — At least four Mississippi counties have decided recently to move Confederate monuments away from courthouses as widespread protests over racial injustice are renewing debate over symbols that many consider divisive.

“I don't want to pass this problem to the next generations,” Bolivar County supervisor James McBride told The Associated Press on Wednesday.

McBride and his colleagues voted unanimously Monday to move a statue that has stood since 1908 outside the courthouse in Cleveland. A new site will be chosen later, and supervisors will advertise for a qualified contractor to move the statue so it won't be damaged, McBride said.

“If anything is going to be displayed on government property, it should be something that is inclusive of the entire populace,” McBride said, mentioning the possibility of a monument to World War I, World War II or the Vietnam War.

Also Monday, Lowndes County supervisors voted unanimously to move a Confederate soldier statue from the courthouse in Columbus to a city-owned cemetery where Confederate and Union troops are buried. That was a reversal from their split vote last month to leave it in place.

Supervisors in Washington and Leflore counties voted last month to move Confederate statues, with sites to be determined.

The Southern Poverty Law Center says about 780 Confederate monuments and statues stand on public property in the United States, and at least 50 of those are in Mississippi. Many of the monuments were put up in the early 20th Century, as groups such as United Daughters of the Confederacy pushed a “Lost Cause” narrative that minimized slavery as a central cause of the Civil War.

Lafayette County supervisors voted unanimously Monday to leave a Confederate monument outside the old courthouse on the Oxford square.

Forrest County supervisors said last month that they will let voters decide in November whether to move a Confederate monument that was donated to the county in 1910.

In Harrison County on the Gulf Coast and in Lee County in northeastern Mississippi, residents have asked supervisors to remove Confederate soldier statues.

After historic votes in the Legislature, Mississippi last week retired a 126-year-old state flag that was the last in the U.S. with the Confederate battle emblem. A commission will design a new flag that cannot have the emblem and must have the phrase, “In God We Trust.” That lone design will go on the statewide ballot in November.