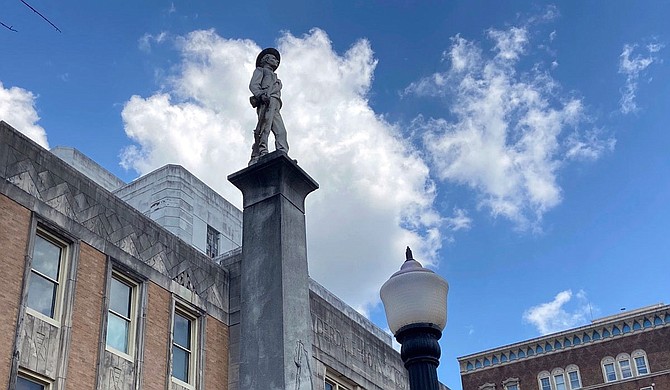 Black Empowerment Organization was supported by the Southern Poverty Law Center in asking Neshoba County supervisors to remove the Confederate soldier statue. The figure stands outside the courthouse where a jury in 2005 convicted a reputed former Ku Klu Klan leader, Edgar Ray Killen, of manslaughter in the 1964 killings of the three civil rights workers — Michael Schwerner, James Chaney and Andrew Goodman.

“Our public buildings, landmarks, and institutions should not conceal the truth about our shared history, and should not be used as a backdrop to glorify traitors to the United States," Brandon Jones, Mississippi policy director for the Southern Poverty Law Center Action Fund, said in a statement Monday.

“Confederate monuments are symbols of white supremacy,” Jones said. "They continue to further the false narrative that the Civil War was fought for something other than to keep Black people enslaved."

Lauderdale County is going to turn its current courthouse into a history museum after it moves government operations to a different building. Supervisors' President Kyle Rutledge said the statue's current location is “a fitting place," WTOK-TV reported.

The “Mississippi Burning” case gained international attention because President Lyndon B. Johnson ordered the FBI to conduct a massive search for the three missing civil rights workers, whose bodies were found weeks after they disappeared.

Chaney was an African American who grew up in Lauderdale County. Schwerner was a white man from New York who worked in Mississippi for several months, registering Black people to vote. Goodman was a white New York resident who arrived in Mississippi only hours before he, Chaney and Schwerner were killed after they drove to Neshoba County to investigate the burning of a Black congregation’s church.

Southern Poverty Law Center says about 780 Confederate monuments and statues stand on public property in the U.S., and at least 50 are in Mississippi.

Many of the monuments were put up in the early 20th century, as groups such as United Daughters of the Confederacy pushed a “Lost Cause” narrative that minimized slavery as a central cause of the Civil War.

After historic votes in the Mississippi Legislature in late June, the state retired a 126-year-old banner that was the last state flag in the U.S. with the Confederate battle emblem. A commission will design a new flag that cannot have the emblem and must have the phrase, “In God We Trust.” That lone design will go on the statewide ballot in November.

During the past few weeks, supervisors in Mississippi’s Bolivar, Leflore, Lowndes, Noxubee and Washington counties have voted to move Confederate statues away from courthouses.

Lafayette County supervisors voted unanimously July 6 to leave a Confederate monument outside the old courthouse on the Oxford square, about 1 mile (1.6 kilometers) from where the similar statue stood on the University of Mississippi campus. The university last week moved its statue to a Civil War cemetery in a remote part of campus.

Forrest County supervisors said in June that they will let voters decide in November whether to move a Confederate monument that was donated to the county in 1910. In Harrison County on the Gulf Coast and in Lee County in northeastern Mississippi, residents have asked supervisors to remove Confederate soldier statues.