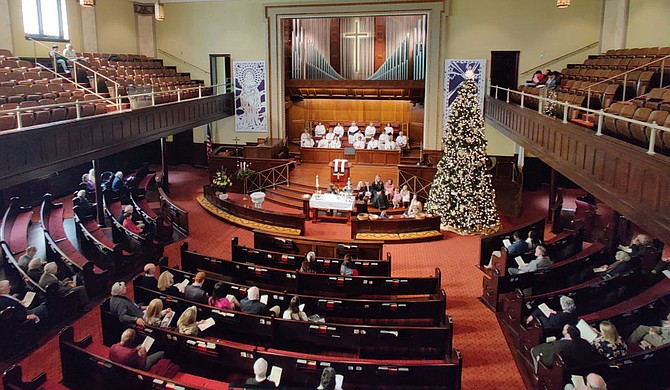 State leadership of religious institutions like Galloway United Methodist Church is in question as the potential for a schism over LGBT marriage and ordination looms. Photo by Nick Judin.

The future of Mississippi's United Methodist churches and institutions is in question after a group of influential United Methodist Church leaders announced a preliminary agreement to split the church in two on Jan. 3, due to irreconcilable disagreements over LGBTQ rights. The denomination's traditionalist wing, which rejects same-sex marriage and the ordination of queer clergy, will likely depart from the church if the church formally approves the agreement at its global conference in Minneapolis this May.

Jackson-area church officials stressed to the Jackson Free Press that a long process of institutional debate and amendment precedes even a formal vote on a schism. But they acknowledged that a schism may lead to Mississippi's annual conference joining the traditionalist branch, taking its nearly 1,000 churches and extension ministries with it.

One of those institutions is Millsaps College, founded in affiliation with the Methodist Episcopal Church South, which merged into the United Methodist Church in 1968. Methodist reverends make up a segment of Millsaps' board of trustees. If the Mississippi annual conference—the church's regional unit—chooses to leave with the traditionalists, it could end up taking Millsaps with it.

Rev. Dr. Joey Shelton, chaplain and director of church relations at Millsaps, admitted he sees no clear answer. "You have to look at the charter of the college," he said in an interview. "Is it cut and dry that the college would automatically be considered an asset of the conference or not? The way the charter reads—it's kind of confusing what the ultimate relationship is."

The potential schism comes after years of intractable debate over the role LGBTQ people deserve in the church community and hierarchy. Those disagreements played out at last year's conference in St. Louis, Mo., where a narrow majority of church delegates voted to reaffirm the church's ban on same-sex marriage. In spite of this narrow victory for traditionalists, a schism would mean that progressives remain and conservatives depart due to the denomination's relatively strong regional autonomy, Rev. Lance Presley, pastor of Broadmeadow United Methodist Church, explained.

"The traditionalist side won the vote, but it wasn't by very much, and some of the key pieces that would have allowed them to enforce their plan were ruled against the UMC constitution," he said. "Progressive conferences are still able to resist, without a whole lot that can be done about it. There's not the majority to end the fight."

In light of this, many conservatives argue that voluntary departure is the best way to create an institution with no regional heterodoxy on LGBTQ rights, a cause the church's traditionalist wing says is worthy of splitting the denomination.

Church officials reached for this story were quick to point out that the legislative process involved in confirming an ecclesiatical split has yet to even truly begin. The informal agreement presented as the "Protocol of Reconciliation & Grace Through Separation" must still proceed through a lengthy process of committee and debate before receiving a final vote this May. But the influence of the document's architects means the plan has a strong chance at this year's global conference, they acknowledged.

A schism, were it to happen, would ripple down to each of the church's 13 million parishioners. Each annual conference would be able to call a vote to leave alongside the traditionalists with 20% of the conference's delegates. A 57% majority would confirm the split. But every individual congregation may also choose to vote, breaking free of the annual conference to stay or depart.

Some sources, speaking on background, said that the Mississippi annual conference would likely vote to leave in such a scenario, but anticipated that many of the churches in the Jackson area would vote to stay. Nearly 1,000 United Methodist congregations are in Mississippi.

Galloway United Methodist Church's Council Chairman Chuck Sampson regrets the potential for internal strife. "I don't think it's a happy thing for anyone," he said. Sampson stressed the role individual believers would have in the event of a split. "Is the position that the leadership of the church takes on this issue consistent with my understanding of scripture? That's something every individual congregation will be faced with."

The binary nature of a schism means churchgoers face a decision that is at once political and scriptural. But for many Methodists, this challenge is nothing new. Bishop Melvin Talbert, a retired pastor long seen as a leading voice for Methodist LGBTQ inclusion, wrote passionately of the need for "Biblical Obedience," which discards church law against homosexuality in favor of the biblical message of universal love. "I stand before you here this afternoon, and I declare that God has already settled his matter: all human beings are created in the image of God. There are no exceptions, no exclusions. We belong to the family of God," Talbert said to the Love Your Neighbor Coalition in 2012.

Presley declined to predict how this critical juncture in the church's history would play out. But, he said, a split would bring opportunities. "You're going to have a few churches in Jackson live into acceptance and affirmation of LGBTQ people the way they have wanted to," he said.