Reform By Any Other Name | Jackson Free Press | Jackson, MS

Reform By Any Other Name 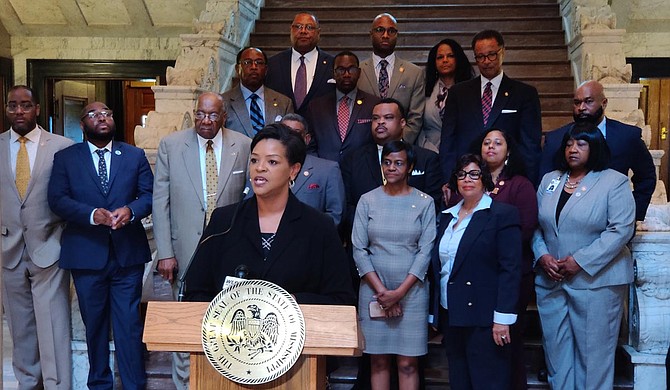 "We endeavor to be the collective voice of the 1.2 million African Americans in the state of Mississippi," Legislative Black Caucus Chairwoman Sen. Angela Turner-Ford, D-West Point, said Feb. 12 while standing in the Mississippi Capitol rotunda as the group unveiled its agenda for 2020.

Health justice and Medicaid expansion stands front and center in the legislators' agenda. Turner-Ford stressed the material realities of the black experience in Mississippi. "Black women in Mississippi are three times more likely to die from complications related to childbirth," Turner-Ford said. "This is a travesty. And we want to do something about it."

That statistic may be low. The Centers for Disease Control's Pregnancy Mortality Surveillance System estimates around 12 deaths in 100,000 live births for white women and 40 deaths in 100,000 live births for black women. Medicaid expansion in all its forms is the caucus' primary avenue of addressing this disparity, especially as it relates to the state's struggling rural hospitals, many located in majority black areas of the state.

Turner-Ford has a long session in front of her. So does the rest of the caucus. The Legislature will take up many of its key issues key, from teacher pay to criminal-justice reform. But the group wants to ensure that the fruits of those efforts are equally distributed.

As part of the caucus' education agenda, Turner-Ford brought up the issue of the state's teacher shortage, which also reflects Mississippi's racial disparities. School districts with higher proportions of black students tend to have higher proportions of non-certified teachers. "We're proposing that one way this can be addressed is to implement a loan forgiveness program for those teachers who decide to go and serve in underperforming, economically depressed areas," Turner-Ford said.

The Elephant in the Prison Cell

Sen. Juan Barnett, D-Heidelberg, is the new chairman of the Senate Corrections Committee, a powerful appointment for a Democrat in a Republican Legislature and a position of authority in a trying time for the state's prisons. Barnett said in an interview that sentencing reform is an issue of immediate concern.

So is housing for parolees. An MDOC task force last year raised the issue of inmates eligible for early release who remain imprisoned due to no transitional housing. "That's something we're definitely looking into, to find some transitional housing we can use to move some of these individuals out of the corrections system," Barnett said. "We've been engaged with faith-based organizations and private entities as well to see how they can assist."

Barnett is settling in for the long term, seeking to address the failings of the corrections system holistically.

"We are working not just to fix Parchman, but our Department of Corrections as a whole. We're looking to fix the whole institution, for staff, pay, inmates, the whole nine yards. We have to be mindful, you know, that there is no way to fix all of this in a short session period," he explained.

Rep. Jeramey Anderson, D-Gulfport, is tackling criminal-justice reform from another angle: police accountability and transparency. Anderson's House Bill 790 would require the Mississippi Bureau of Investigation to probe all officer-involved deaths. The state attorney general must then "determine whether the results of the investigation should be presented to the grand jury." If a grand jury is convened, the attorney general would then appoint a state attorney as a special prosecutor, formalizing the process for prosecuting unjustified police killings.

For freshman Rep. Zakiya Summers, D-Jackson, election reform means expanding access to the ballot—and fighting off attempts to suppress it. "With Mississippi being ground zero for the Voting Rights Act, over the years since then there have been attempts to roll back those efforts," she said at the Mississippi Legislative Black Caucus gathering.

Summers supports online first-time voter registration. Previously registered voters can already re-register online on the secretary of state's website. That same system could be expanded to include new voters as well. "The system already exists," Summers said. "It wouldn't be a hard task for the secretary of state to develop it. We just need support from the Capitol."

This "third-grade gate" began with the 2013 legislative session's Literacy-Based Promotion Act, which then-Gov. Phil Bryant signed. The State increased the level of attainment required for students to progress to fourth grade starting with the current school year. Previously, children had to reach the second level of a five-tier scale. This year, they must reach the third level.

Mickens says holding students back is not the solution. "I feel strongly that one test shouldn't prevent a child from going forward to fourth grade," Mickens said in an interview. "I'm not in favor of testing (being used) to prohibit children passing forward on any level."

State leadership frequently celebrates the educational attainment of its elementary-school students. Gov. Tate Reeves, speaking at a Feb. 6 press conference, defended the state's academic track record. "NAEP, in their words, said Mississippi was the only state in the nation to show significant and marked improvement in both reading and math results," Reeves told the Jackson Free Press. He was referring to a 2019 study that compared the state's educational gains to the rest of the nation. The study found Mississippi's gains in fourth-grade reading to be the highest in the nation.

But Mississippi also has the highest retention rate of third-graders in the nation, which may influence the testing scores for fourth graders.

'Ours to Look After'

Rep. Ronnie Crudup Jr., D-Jackson, introduced legislation in the House to waive the cost of post-secondary education for children presently considered wards of the state. House Bills 15 and 16 would also make allowances for children adopted after age 9.

As the bill extends the waiver to children adopted after age 9, the age at which the adoption rate dramatically declines, leaving most children in America's foster-care system past that age. It also defrays some of the immediate cost of adopting an older child.

In both his inauguration speech and his State of the State address, Gov. Reeves called for Mississippi to honor its commitments to its foster children. "However they come into our care, they are ours," Reeves said. "Ours to protect. Ours to lift up. Ours to look after."

A painless floor vote accepted the unanimous recommendation of the Special Election Committee to confirm the results of the election, which Jackson-McCray won by 14 votes.

The Senate passed the first teacher pay bill, long-expressed as the session's first priority. Senate Bill 2001, a statewide raise of $1,000 per teacher, raced through the chamber with virtually every senator clamoring to co-sponsor it. An equally rapid passage likely awaits it in the House.

On Feb. 6, Lt. Gov. Delbert Hosemann expressed relief that at least some of the planned teacher-pay bump was on its way to passing, undoubtedly worried that the enormous Department of Human Services scandal would distract the Legislature's attention.

House Speaker Philip Gunn, R-Clinton, announced in January that he would not budge on his decision to prohibit lawmakers from receiving public retirement funds while drawing a portion of their legislative income.

The Public Employee Retirement System modified its policies late last year to allow for such a circumstance, but Gunn rejected the possibility, stating that "double-dipping" conflicts with state law.

"It is not right for taxpayers to have to fund both," Gunn told the Daily Journal on Jan. 16.

The representatives introduced bills to rewrite the law, but the House Appropriations Committee quickly sunk their attempts. House Bills 601, 602 and 603 each used similar wording, rewriting state law to treat lawmakers similarly to other state employees who may continue to draw on public retirement if they go back to work for a state agency.

Three remaining House members still hoping to retain their pensions while in the Legislature—Jerry Darnell, R-Hernando; Dale Goodin, R-Richton; and Billy Andrews, R-Purvis—told the website Mississippi Today after the Appropriations Committee meeting that they were unsure if they would resign.