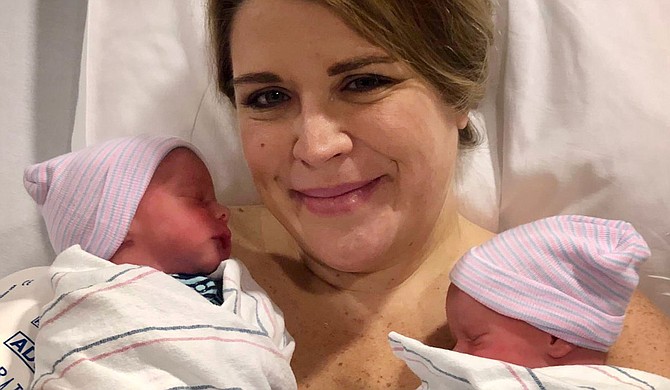 Three years ago, Amanda Joullian Chappell and her 5-year-old daughter did something different for Mother's Day. Usually, the pair would celebrate at her mother's house. But because her mother was out of town, Chappell celebrated her first Mother's Day alone with her daughter.

The then-single mother and her daughter went on a picnic, walked along the reservoir and fed ducks. Her daughter gave her a card and a few trinkets from her room. Chappell still carries one of those gifts, a rock shaped like a heart, in her purse every day.

“What could have been a lonely time wasn’t at all,” Chappell says. “The reason it was so special was because it was the epitome of me getting to be a mother and be with my child and be motherly.

Since then, Chappell married her Travelin' Jane Band & Duo bandmate, John Chappell, who had two daughters and one son from a previous marriage. Soon after their marriage, Chappell became pregnant with twins.

She anticipates doing something simple at home this Mother's Day. "I've been joking that I've been in quarantine since (the twins) were born because I haven't been able to do much of anything because I've been taking care of them. I've been calling everyone else quarantine amateurs," Chappell says, laughing.

The cover band, formed in 2007, performs music that ranges from the '60s to the hits of today presented in "Jane style," which Chappell describes as blue-eyed soul with country and rock 'n' roll. Chappell says the band staying true to themselves has given them a diverse and loyal fanbase she calls Jane Friends, or the Travelers.

Since the quarantine cancelled the band's planned public performances, Chappell has stayed connected with the Travelers via text and one live-streamed show alongside her husband. She expects the band to do more online shows in May but misses the energy she gets from a live audience.

“Motherhood and music: those are probably my two greatest passions in this world. I’m up there singing and pouring my passion out, and those people want that. They want to hear that,” she says. “Sometimes that still amazes me that people respond to just us—just plain ole Jane and Amanda singing—and they give it back with their energy.”

For years, people have told Chappell she shouldn't perform because of her children. Chappell says the critics don't understand that music is a part of her DNA.

She remembers performing her first solo at her Southern Baptist church when she was 3 years old. Normally, the minister of music would hold the mic for the children’s choir soloists, but Chappell took the mic, walked to the side of the stage and confidently sang on her own. As she got older, she graduated from performing for her dolls to performing with select ensembles. In her adulthood, she sang in a show in Missouri for years before returning to Mississippi.

Chappell and her husband John formed the Travelin' Jane Duo in 2014. Other band members include Richard Hall and Cliff Hellums. Performing together has heightened the couple’s magical connection, she says.

"I'm in T-shirts everyday, feeding and cleaning, and then I flip the switch and dress up and perform. I release. ... (John is) the same way. He works all day, and then he gets to take his love and his passion and be on stage and release," she says.

Chappell encourages other mothers to pursue their passions as well.