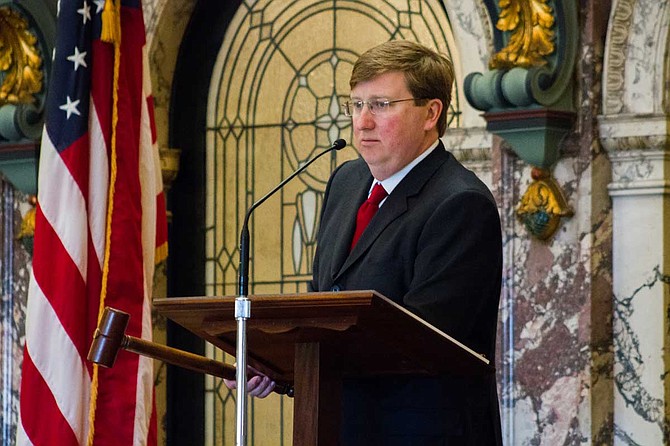 Attorney General Jim Hood released a 43-page investigative report on whether Lieutenant Governor Tate Reeves was involved in an attempt to build a $2 million frontage road in Flowood, Miss., which would have connected Reeves' home within a private subdivision to a nearby shopping center. Photo by Stephen Wilson

JACKSON — The Office of Attorney General placed on its website today a nine-page opinion written by former Mississippi Supreme Court Justice David Chandler, after Chandler and former Mississippi Supreme Court Chief Justice Edwin Lloyd Pittman, who also served as attorney general, reviewed an accompanying 43-page investigative report on whether Lieutenant Governor Tate Reeves directly or indirectly, through the effort of his staff or others, was involved in or unduly influenced an attempt to build a $2 million frontage road in Flowood, Miss., which would have connected Reeves' home within a private subdivision to a nearby shopping center. 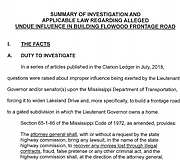 Due to the public and press interest in this matter, Attorney General Hood asked the two distinguished former Mississippi Supreme Court justices to provide a bipartisan review of this report and to offer their legal opinions based on the evidence presented in the report.

Prior to serving as Chief Justice from 2001-2004, Justice Pittman was elected attorney general in 1984, secretary of state in 1980, and state treasurer in 1976. During Justice Pittman's tenure as attorney general, he brought several actions for the enforcement of section 109 of the Mississippi Constitution, which addresses conflicts of interest by legislators and local government board members being on both sides of a contract in which they have an interest. This litigation resulted in the consolidation of these cases and those brought by the Ethics Commission into landmark section 109 case of Frazier v. State by and through Pittman, 504 So.2d 675 (Miss. 1987).

Attorney General Hood (pictured) asked former Mississippi Supreme Court justices David Chandler and Edwin Lloyd Pittman to provide a bipartisan review of his report on Reeves, and to offer their legal opinions based on the evidence presented in the report. Photo by Arielle Dreher

Justice Chandler sent his 10-page opinion to the Office of Attorney General on Tuesday, September 10, which reads in part:

"A reasonable factfinder could review the evidence in the report and conclude that Lieutenant Governor Reeves wanted the frontage road to be built and additionally applied political pressure to that end. However, I do not believe any evidence in the report establishes that the Lieutenant Governor received or could have potentially received any amount of compensation for the project to an extent that liability arises under Section 109 of the Mississippi Constitution...

"With the above in mind, I will note one potential issue. According to the report, Lieutenant Governor Reeves and his spouse 'own a membership share in the Oakridge Property Owners' Association, In. (sic), (OPOA).' This shareholder membership and the actions of OPOA could potentially implicate Section 109."

Chief Justice Pittman stated that Section 109 of the Mississippi Constitution may come into play, which provides that:

" ...no public officer or member of the Legislature shall be interested, directly or indirectly, in any contract with the State, or any district, county, city or town thereof, authorized by any law passed or order made by any board of which he may be or may have been a member, during the term for which he shall have been chosen, or within one year after the expiration of such term." 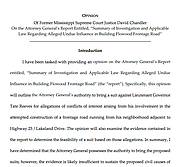 Attorney General Hood thanked Justices Pittman and Chandler for their expertise, time and diligence in reviewing the report.

"My view is that the report speaks for itself. It should be read by the press and public, which can make their own judgment as to the actions and conduct of Lt. Governor Reeves."

The Office of Attorney General will take no further action on this matter. Any action which might be filed by the next attorney general would allow the state to subpoena emails from the Office of Lieutenant Governor and the Senate and secure depositions, the lack of which impeded the present investigation.