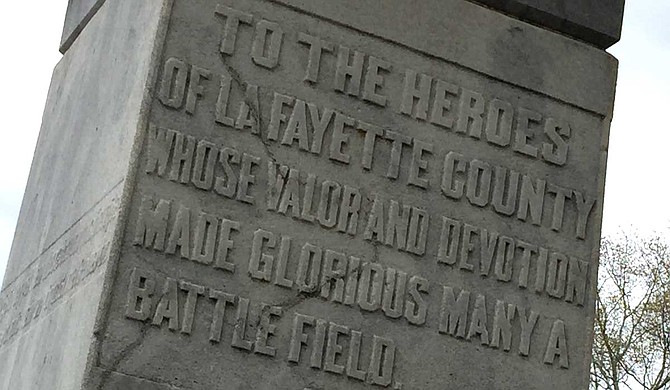 A towering monument to the Confederacy stands guard over the entrance of the University of Mississippi. Many students and professors want it moved. Photo by Donna Ladd

A towering monument to the Confederacy stands guard over the entrance of the University of Mississippi, where I have worked the past seven years. The monument, commissioned and funded by the United Daughters of the Confederacy in 1906, is in remembrance to "the valiant heroes of Lafayette County."

As a scholar who studies the causes and consequences of racism, I am often asked for my thoughts on our University's monument, and Confederate iconography more generally.

A recent report from the Southern Poverty Law Center situates the university's Confederate monument within a larger effort across the American South "to create a more acceptable version of the region's past." The timing of these monuments' construction reveals their racist motives. Most were commissioned between 1900 and 1920, and then from the mid-1950s through the end of the 1960s. Their commissioning was concurrent with the enacting of Jim Crow legislation, the revival of the Ku Klux Klan, and the modern Civil Rights Movement. They reflect and amplify white southerners' racial backlash to significant political gains made by an emancipated African American population. 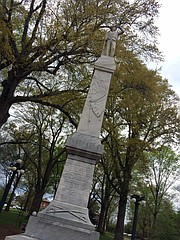 Carved from marble, the University of Mississippi's Confederate monument measures nearly 30 feet in height. A Confederate soldier stands atop its large base, saluting with a rifle by his side. Photo by Donna Ladd

Carved from marble, the University of Mississippi's Confederate monument measures nearly 30 feet in height. A Confederate soldier stands atop its large base, saluting with a rifle by his side. Two cavalry swords crossing one another are etched into the base, along with a passage from Lord Byron's "The Siege of Corinth" and an elegiac couplet by the Greek poet Simonides. Translated, it reads, "Go tell the Spartans, stranger passing by, that here, obedient to Spartan law, we lie." The couplet is identical to that which is engraved on the monument to the Spartans who died at the Battle of Thermopylae.

The term "stranger" was a common rhetorical device within ancient Greek epitaphs for making sympathetic appeals to passers-by. In the monument's epitaph, the passerby, or "stranger," is compelled to tell all who will listen that the Confederates gave their lives to a noble cause. Their death was honorable, and their service obedient.

In 2016, then-Chancellor Jeffrey Vitter approved the addition of a plaque to be placed in front of the monument. The original wording noted the construction of monuments like this one all across the South during the post-Reconstruction period as a response to Confederate veterans' passing from the scene in increasing numbers. It also noted the monument's significance as the rally point for segregationists attempting to prevent James Meredith from integrating the campus in 1962. The original wording closed by stating the monument is a reminder of both the university's past and its present commitment to becoming a more inclusive campus.

The plaque's addition was met with mixed response. Defenders of the monument claimed the plaque diminished the sacrifice those former university students made. Others claimed its wording failed to acknowledge the preservation of slavery as the true cause of the Confederacy. Still others asserted the plaque co-opted later struggles to integrate white institutions, and minimized the university's violent resistance to its integration in 1962.

Following several weeks of protests, letters and appeals, a chancellor-appointed committee of four faculty members drafted and approved new language for the plaque. The revised wording emphasized the monument's role in promoting "Lost Cause" ideology, and the significance of slavery in the Confederacy's formation and maintenance.

Many thought the revised language was an improvement. Others argued it further diminished the former students' sacrifice. Still others maintained that the very presence of the monument served as tacit support for a violent system of racial domination.

So what do I think? 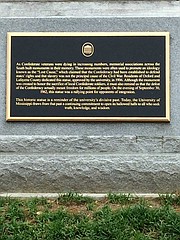 In 2016, then-Chancellor Jeffrey Vitter approved the addition of a plaque to be placed in front of the monument. Photo by Donna Ladd

I think that when white Confederate sympathizers demand that we honor their dead, they ignobly play the victims twice over. First, in proclaiming as virtuous their ancestors' sacrifice to a Lost Cause. And again when demanding that we honor such shameful deeds.

I think Confederate monuments should be removed from public spaces. I think their cheap, bronze and zinc casts should be melted down, their marble bases ground into dust. I do not think monuments to soldiers who fought and died to preserve white supremacy belong in front of our community courthouses, public squares or public universities. To be sure, if a museum wishes to house them, then let those museums have them. But I doubt many do.

Others declare these monuments honor the brave men who defended their homes from federal invasion. Yet these declarations willfully ignore that enslaved labor and its profits built and maintained those homes, and that slavery was the principle cause for secession.

Some proclaim those who fought and died for the Confederacy had no choice, most of them were poor farmers, and few of them owned slaves. To be sure, the percentage of households that owned slaves varied—from 12 percent in Maryland, to 49 percent in Mississippi. Yet the men, women and children who lived in bondage had no choice in the matter of their enslavement. The men who fought to defend slavery had, at minimum, more choice than none at all.

Still others will accuse me of destroying history. On the contrary, I demand a clearer history. Confederate monuments simplify and obfuscate the historical record. Scholarly texts on America's Civil War are plenty. Our precious resources are better spent supporting public libraries in which those texts are housed.

Finally, there are those moderates of whom Martin Luther King Jr. warned us about, who offer contextualization as a great educational compromise for passers-by. Yet a plaque in the place of a monument would serve the same purpose, but without the hypocrisy.

Take them down. Every last one of them.

James M. Thomas is Associate Professor of Sociology at the University of Mississippi. Follow JT on Twitter at @Insurgent_Prof.