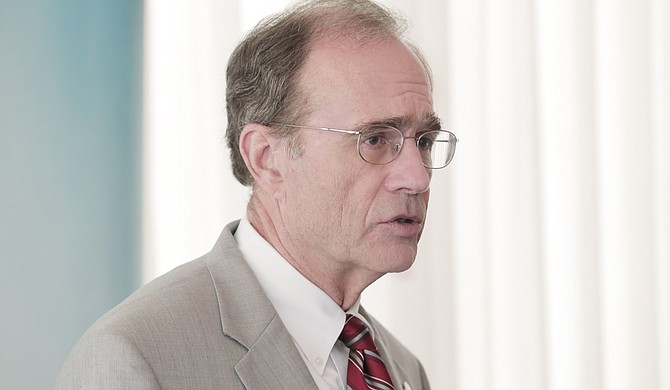 The lawsuit is filed against Secretary of State Delbert Hosemann (pictured), who is the state’s chief elections officer. Hosemann declined to comment on the lawsuit Monday, spokeswoman Anna Moak said. Photo by Imani Khayyam

JACKSON, Miss. (AP) — A new federal lawsuit challenges a Jim Crow-era law in Mississippi that requires naturalized U.S. citizens to show proof of citizenship when they register to vote.

The lawsuit was filed Monday by the Mississippi Immigrants Rights Alliance.

A Mississippi law enacted in 1924 requires naturalized citizens to show a certificate of naturalization or another similar document that proves citizenship when they register to vote. Mississippi residents born in the U.S. must only check a box on a voter-registration form to say they are citizens.

The lawsuit says the system is unconstitutional because it treats one group of citizens differently from others.

“The Fourteenth Amendment’s Equal Protection Clause itself draws no distinction between citizens born or naturalized in the United States. In the eyes of the Constitution, they are one and the same,” the lawsuit says. “Naturalized citizens are American citizens in every sense of the term, and they must be treated as such.”

The lawsuit is filed against Secretary of State Delbert Hosemann, who is the state’s chief elections officer. Hosemann declined to comment on the lawsuit Monday, spokeswoman Anna Moak said.

The suit says the Mississippi law “discriminates against naturalized citizens who might not have ready access to their naturalization certificates,” particularly those whose certificates have been lost or stolen and who cannot afford a $555 filing fee for replacement copies.

This is the second Jim Crow-era Mississippi election requirement to be challenged in federal court in recent months. African American plaintiffs sued the state in May over a part of Mississippi’s 1890 constitution that requires a candidate for governor or other statewide office to win a majority of the popular vote and to be the top vote-getter in a majority of the 122 state House districts. If no candidate clears both hurdles, the race is decided in the state House — a provision inserted to maintain white control over the state’s top offices.

U.S. District Judge Daniel P. Jordan III ruled days before the Nov. 5 election for governor and other offices that he would not immediately block the multi-part election process, but he wrote that he has "grave concern that at least the Electoral-Vote rule is unconstitutional."