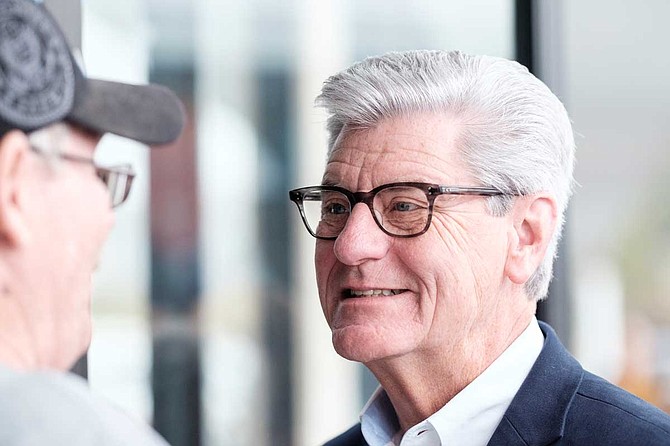 Through his time as Mississippi governor, Phil Bryant has repeatedly signed laws seeking to restrict access to abortion in the state. Photo by Ashton Pittman.

JACKSON, Miss. (AP) — In 2015, on the 42nd anniversary of the Supreme Court ruling that legalized abortion nationwide, Mississippi Republican Gov. Phil Bryant said: "I am as committed as ever to ending abortion in Mississippi."

Reproductive rights lawyers cite Bryant's statement in their recent court filing as they ask a federal judge to permanently block a law the governor signed this year to ban most abortions once a fetal heartbeat can be detected. That's at about six weeks, before many women even know they're pregnant.

U.S. District Judge Carlton Reeves issued a temporary injunction last month to block the law from taking effect July 1, and he asked attorneys to file detailed arguments as he considers the constitutionality of the law.

Plaintiffs who sued the state filed their arguments May 30, and the state attorney general's office responded June 11. The filings address not only the law enacted this year but also other Mississippi abortion laws, including one requiring at least a 24-hour waiting period before a woman can have the procedure.

The lawyers present starkly different views. And, even as Bryant and other politicians have openly said their goal is to limit or end abortion, state attorneys argue that Mississippi laws have not reduced access to abortion:

— Plaintiffs: Mississippi had several abortion clinics in the 1980s and has had only one since 2004. "The number of abortions provided annually in Mississippi has declined by almost two-thirds from 1991 to 2014."

— State: "The state defendants specifically deny that any law or regulation has caused an abortion facility to close or reduced access to abortion in Mississippi."

— Plaintiffs: Bryant signed a 2018 law banning most abortions after 15 weeks of pregnancy, and Reeves blocked it as unconstitutional. Writing about that law and this year's six-week ban, plaintiffs' lawyers wrote: "Both of these bans violate women's constitutional right to access abortion pre-viability and should be struck down."

— State: The state denies that either of the laws is unconstitutional under existing Supreme Court precedent.

—Plaintiffs: Mississippi's 24-hour waiting period requires a woman to go to a clinic twice to receive an abortion, which means "many women must take additional time off from work," often forcing them to forgo wages or even put a job at risk. Plaintiffs' lawyers also write that multiple trips may require a woman to get child care or to make explanations to a husband, partner or family member, putting the woman at risk of "domestic violence or worse."

— Plaintiffs: Abortion providers face "more burdensome regulations than healthcare providers who perform office-based procedures that have a similar or greater risk of complications."

— State: "The state defendants deny ... that any Mississippi abortion law or regulation has placed an undue burden on Mississippi women seeking to have an abortion in the state, has caused the closure of any abortion clinic or provider, or has reduced access to abortion in Mississippi."

— Plaintiffs: "The risk of death associated with childbirth is approximately 14 times higher than that associated with abortion, and every pregnancy-related complication is more common among women having live births than among those having abortions." Plaintiffs' lawyers also wrote: "In Mississippi, the maternal mortality rate is more than twice the national average, at 39.7 pregnancy-related deaths per 100,000 live births between 2010 and 2012, the most recent data available." They cite a Mississippi State Department of Health report.

— State: "The state defendants admit only that, in the abstract, the risk of death associated with childbirth is greater than the risk associated with abortion." It also says statistics cited by the plaintiffs "were accurate at the time they were published by the Mississippi Department of Health."