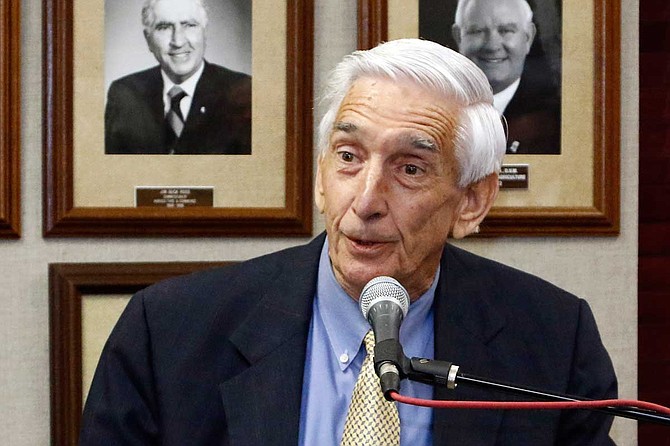 A source who spoke directly to law enforcement about the investigation but was not authorized to discuss the matter publicly told The Associated Press that the case involves the death of the Rev. Harry Noble Gipson (pictured), the father of Commissioner Andy Gipson. Photo by Rogelio V. Solis via AP

JACKSON, Miss. (AP) — The father of Mississippi's agriculture commissioner has died, and authorities are investigating whether he was shot by a sheriff's deputy.

The Simpson County Sheriff's Department said Thursday it had "an officer-involved shooting." The Mississippi Bureau of Investigation said it is examining the case and declined to release details.

A source who spoke directly to law enforcement about the investigation but was not authorized to discuss the matter publicly told The Associated Press that it's about the death of the Rev. Harry Noble Gipson, the father of Commissioner Andy Gipson.

Andy Gipson said in a statement Thursday: "My father passed away tragically after a yearslong struggle with a brain injury and related illness. Please pray for our family and we ask for a period of privacy to grieve."

Andy Gipson lives in Simpson County, as did his father. The Republican was named agriculture commissioner in 2018 after serving 10 years in the Mississippi House, where he was an advocate of gun owners' rights and often spoke in support of law enforcement officers.

MBI said it has a policy of not releasing names of law enforcement officers under investigation in shootings. The Simpson County Sheriff's Department said they would not release the names of any officers involved in the Thursday shooting.

MBI said it would provide information to the district attorney's office.

An obituary from the family said Harry Gipson had remained active in ministry even after suffering traumatic brain injury from several accidents, including a mule wagon wreck, a fall off a forklift and a life-threatening motorcycle wreck.