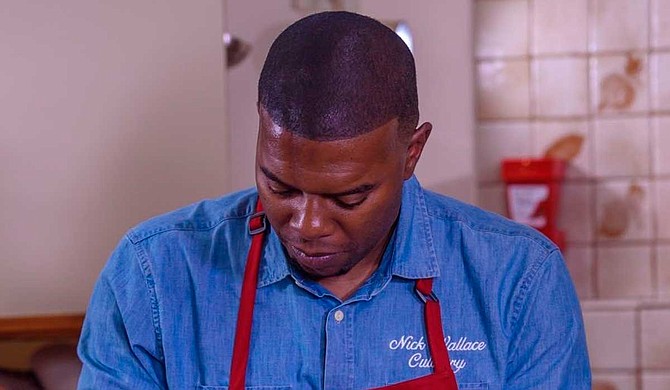 Though "farm-to-table" is a popular food and restaurant concept these days, it informed much of Jackson chef Nick Wallace's culinary background. He grew up on a farm near Edwards, Miss., where his family produced most of the food they ate. He started cooking as a child in the kitchen with his grandmothers, Queen Morris and Lennel Donald. In 1999, he received an associate degree in food and beverage management from Hinds Community College.

Wallace worked at BRAVO! Italian Restaurant from 2001 to 2003, when he became the first African American executive chef at the downtown Jackson Marriott Hotel. He worked there until 2008 when he was named the executive chef at the Hilton Jackson. in 2010, he started working at the King Edward Hotel.

It was in 2013 that Wallace began his time as the executive chef at the Palette Cafe for the Mississippi Museum of Art. After a year there, he decided to start his own business, Nick Wallace Culinary, and in 2017, he formally announced that he would leave his post at the museum to put more focus on that.

"I wanted to work with local farmers more and have solid connection with the people who worked the farms producing the food and are responsible for what ends up on the table here in Mississippi," he says.

Over the course of his career, Wallace has won many awards for his cooking and participated in numerous competitions. In 2013, he was invited to cook at the James Beard Foundation in New York City for the third Chefs Boot Camp for Policy and Change, and has served as a chef at the James Beard House on six occasions, with two dinners each in 2015, 2016 and 2017.

Wallace also frequently worked special events with Soul City Hospitality, a company he helped co-found but is no longer part of, from 2014 to 2017 for business owners and nonprofit agencies, developing menus for dinner parties, galas and award ceremonies.

In fall 2017, he won part two of the "Alton's Challenge" tournament on Food Network TV show "Chopped," successfully following up his 2014 spot on the show "Cutthroat Kitchen." While he ultimately did not win the grand finale episode, his "Chopped" round victory placed him on the national culinary stage while also putting the spotlight on Mississippi and southern food culture.

"After the 'Chopped' competition, I really (understood) that I (had to) become a competitor in the kitchen and in the business arena of the food industry," Wallace says.

On Dec. 11, 2018, he made his third appearance on "Chopped," taking on three other tournament runner-ups before falling in the entree round. Last year, he also participated in Northpark's "Taste for the Space" culinary competition.

Despite his busy schedule, the chef has continued his work with Nick Wallace Culinary, offering services such as cooking demonstrations, live game cooking and butchery, along with catering for private affairs, birthday parties, farm-to-table experiences, public speaking and his most recent venture, "From My Hands to Your Kitchen," in which Wallace cooks meals in a person's home kitchen.

In addition, NWC works with local farmers as they venture to become organic-certified.

"The process and costs involved in becoming certified as an organic farmer is difficult for small farmers to achieve, and the certification system works against them, even though some farmers are already producing organic products but can't meet the stringent certification requirements," the chef says.

Another area of Wallace's NWC efforts is working with young people, educating them about healthy foods that are produced in their community and promoting the eradication of food deserts, or places where nutritious and fresh foods are not as accessible.

Recently, Wallace spoke to students, teachers and parents at McAdams High School in rural Attala County about the need to grow fresh vegetables for their own consumption, which is a part of NWC's public speaking educational services.

"Speaking to young people is a passion for me because I feel I can get kids interested in the farm-to-table process of how food arrives in grocery stores, to their home kitchens and finally on their dinner plates," he says.

In the midst of his other projects, Wallace also penned a deal for his debut cookbook, "Rooted: A Modern Mississippian Map to American Home Cooking," which University Press of Mississippi is publishing.

The book will focus on his farm roots, his early experiences in the kitchen, foodways throughout the state of Mississippi, his journey as a formally trained chef, and his experiences as a "Chopped" champion and entrepreneur.