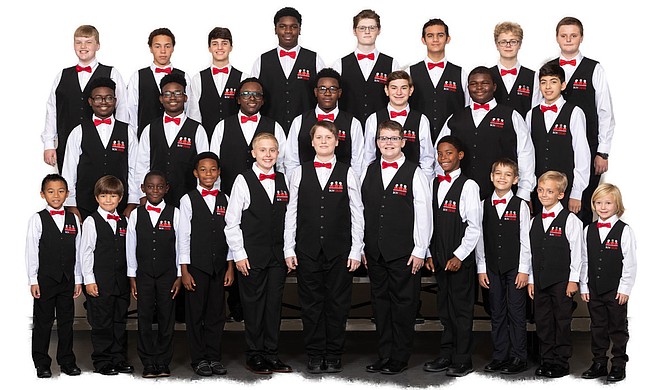 A diverse group of young men have spent months preparing to bring holiday comfort and joy to the Jackson area, and it came to fruition the afternoon of Dec. 14 at St. Philip's Episcopal Church.

Now in its 25th season, the Mississippi Boychoir's annual holiday concert was titled "Tidings of Comfort and Joy" and included both secular and religious holiday music. "The repertoire will feature a mix of classic and contemporary arrangements of old favorites," says Lanise Aultman, who volunteers as the choir's administrator. "We have a spiritual included and a hymn."

This year's concert extended some long-standing traditions of boychoirs. Initially founded in 1995 by Margaret Thomas in Columbus, Miss., the Mississippi Boychoir continues a choral custom that began more than 1,500 years ago.

In the spirit of the contemporary versions, the Mississippi Boychoir helps the young men develop vocal techniques and learn a variety of musical styles while instilling self-discipline and high standards.  Performances such as this one allow them to showcase their talents.

"They've been preparing in earnest for a month or so, now," Aultman says.

The ensemble also prides itself on fostering cultural awareness through economic and racial diversity and inclusion. To that end, no singer is ever turned away for being unable to afford membership in the choir.

"There is tuition to be a member of our choir. Of course, we have some members who cannot afford to pay," Aultman says. About 40% of the boys this year asked for the tuition discount, she says.

Currently, the choir has 27 members who range in age from 7 to 16 years old. Most live in the metro Jackson or Vicksburg area where the current two divisions are located. Previous divisions have been located in Columbus, Tupelo, Hattiesburg and on the Gulf Coast.

Although the choir has spent the last few months preparing for their holiday concert, that has not stopped them from appearing in numerous area shows.

Most recently, the group performed during the Sugar Plum Fairy's Tea Party at the Westin Hotel and the intermission of Ballet Mississippi's "The Nutcracker."

The fall season also saw performances with the Warren Central Madrigals in their Singe Feaste Production and with the  Mississippi Chorus Master Chorale in their Veteran's Day concert.

The group is actively preparing for one of its biggest opportunities to date. The boys have been invited to be the Prelude Choir at the Texas International Choral Festival in July 2020.

The Mississippi Boychoir will be the only choir to perform its own musical set at the beginning of the Festival Concert held in Dallas. Afterward, they will then join the Festival Choir in its performance.

"What's special about it is that we will have our own 20 to 30 minutes set before the mass choir set," Aultman says. "No other choir will get that. It's (also) unique because generally when we go to festivals, it's an open invitation, but this was a specific invitation (to us)."

The staff of the Boychoir is working to ensure that all its members have the opportunity to attend through Giving Tuesdays and other fundraisers.

Attendees at the Dec. 14 holiday concert will also have the opportunity to help sponsor the trip.

The choir is also currently holding auditions for the spring semester.