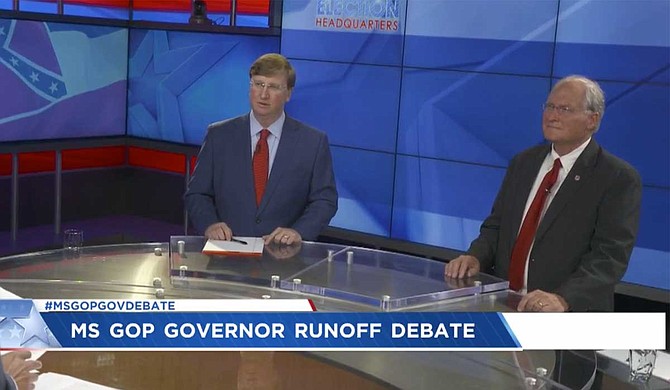 Lt. Gov. Tate Reeves said he and Bryant have been in step up to 98% of the time on big issues, including restricting abortion. Retired Mississippi Supreme Court Chief Justice Bill Waller Jr. offered a longer list, saying lines at driver's license offices have been too long and the state crime lab has received too little money. Photo courtesy WJTV

Lt. Gov. Tate Reeves said he and Bryant have been in step up to 98% of the time on big issues, including restricting abortion.

"We disagreed on a couple of budget items here and there," Reeves said.

"Every sheriff I've talked to has waited a year and a half or two years for an autopsy. That's unacceptable," Waller said.

Bryant could not seek a third term and has endorsed Reeves. The candidate eliminated from the three-person Republican primary on Aug. 6, state Rep. Robert Foster, has endorsed Waller.

Reeves initially received 49% of the vote and Waller received 33%. They are competing in a runoff Tuesday, and the winner will advance to the Nov. 5 general election to face Democrat Jim Hood, Constitution Party candidate Bob Hickingbottom and independent candidate David Singletary.

In response to debate questions, Waller and Reeves both pledged to shorten the waiting times at offices that issue driver's licenses, where hourslong lines are common. Both also said Mississippi needs to increase pay for teachers.

In an interview hours before the Republican debate, Hood told The Associated Press that he wants to cut the state's 7% grocery tax, reducing it at least by half and possibly eliminating it altogether.

Hood also appeared at a locally owned grocery store in the Delta town of Indianola to push his tax plan, saying the Republican-led Legislature has given millions in corporate tax breaks.

"We need to make sure that we cut the grocery tax so working people are able put food on the table," Hood said. "What's happened, since 2012, we have given away so much of the state's money. That's why we don't have money for roads and bridges, is all these tax giveaways, many of them to out-of-state corporations."

Hood said that, to keep cities from losing money with a grocery tax reduction, he wants to send revenue from an online sales tax to cities and counties. That is about $134 million a year, which Hood told AP was "money that fell from the sky" when he and other attorneys general won a taxation case at the U.S. Supreme Court.

Mississippi, Louisiana and Kentucky are the only states electing a governor this year. Hood defeated seven low-budget candidates in the Aug. 6 Democratic primary and is trying to become Mississippi's first Democratic governor since Ronnie Musgrove was unseated in the 2003 election.