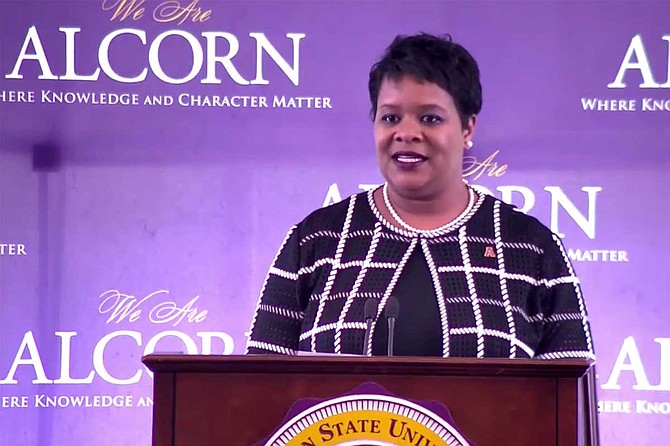 JACKSON, Miss. (AP) — It was a warm homecoming for Felecia M. Nave, unanimously named as the 20th president of Alcorn State University on Wednesday by Mississippi College Board trustees.

The 44-year-old Nave is not only a 1996 graduate of Alcorn, but is also married to an Alcornite and is the daughter and niece of graduates.

"I can't even begin to describe the emotions that are going on and going off right now," Nave said at a news conference after trustees affirmed her as their choice. "It is truly an honor and a privilege to be able to come home."

Nave's return caps a swift rise through the academic ranks. After graduating from Alcorn, she earned a master's degree in chemical and environmental engineering and a doctorate in engineering, both from the University of Toledo in Ohio. From there, she went to work at Prairie View A&M University in Texas. There, Nave said she was applying to lead the school's honors program when a president tapped her for a bigger job, associate provost. Later, Nave became provost at Prairie View, which like Alcorn is a historically black institution. From there, she jumped last year to the same post at North Carolina Central University.

In sessions with faculty, students and university supporters on Wednesday, Nave laid out a vision of a university that will provide a comprehensive 21st century education, while remaining true to its agricultural roots and uplifting the rural areas of southwest Mississippi. Hooper, who led the trustee search committee, said surveys collected Wednesday after those meetings indicated an "overwhelming acceptance" of Nave's selection.

"She has outstanding academic leadership credentials and a demonstrated leadership record," he said. "She has a wealth of ideas on enrollment growth ... and a true love for the university."

After repeated turnover in the president's office, several Alcorn supporters expressed the hope that Nave would have a long tenure.

"We want to keep you as long as you want to stay," said Alfred Galtney, an Alcorn administrator who led a campus group advising trustees.

Alcorn faces challenges, including declining payments from a state legal settlement meant to make up for decades of segregation. Like Mississippi's other smaller public universities, its fortunes rise and fall on tuition revenue. Nave said repeatedly that one of her top priorities would be to increase revenue, donations, economic partnerships and online enrollment. She also said she wanted to make better use of Alcorn's branch campuses in Natchez and Vicksburg. She said she would focus on keeping students in school, making sure they graduate in four years and linking them to career opportunities and global experiences.