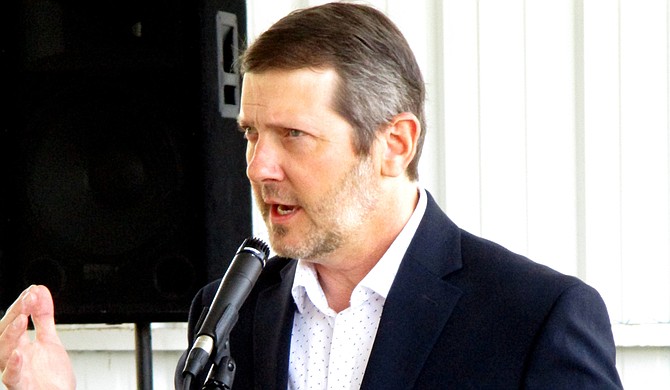 Randy Wadkins is the only Democrat challenging Republican Rep. Trent Kelly to represent District 1 in Congress. Photo by Milly West

Current Job: Chemistry professor at the University of Mississippi

I know my district and the needs of North Mississippians who live here. The “brain drain” is killing us. The lack of healthcare is literally killing us. And the 21st century jobs flowing into Alabama but skipping over us is wrecking our economy. I have a vision for a healthier, happier, and modern North Mississippi. I look forward to using the tools available in Washington to make that vision a reality.

I have a nearly 30 year national and international reputation as a scientist that I have always used to promote Mississippi. I cannot tell you how many times I’ve been asked where I was from, and I responded “Mississippi,” and people laughed and asked “no, really, where are you from?” I’ve always been Randy from Iuka, but I’ve been around the world. There is a stereotype of the people who live here, and I’ve broken it. I want the kids growing up in small towns throughout the district to be more respected globally, and I’ve always worked to make that happen.

The most important vote taken at the federal level was the AHCA vote, which was the Republican “repeal and replace” of the ACA. The AHCA was a startling piece of garbage legislation. It passed the House of Representatives, and subsequently House members went over to the White House to celebrate in the Rose Garden with President Trump (including our current Representative, Trent Kelly). It was the equivalent of the Atlanta Falcons celebrating at halftime of the 2017 Super Bowl. It was such bad policy that the AMA, AHA, AARP, and even the March of Dimes were against that legislation. It would have closed 30 rural hospitals in Mississippi. It blew up in the Senate, thank goodness; what a near disaster. I wish I’d been in the House to have voted against it.

Universal healthcare. If every other civilized country can do it, so can the United States. The US is the wealthiest country on earth. No American should die because they don’t have health insurance.

I’ve spent nearly 30 years working on a cure for cancer, and the last 15 years training students who will go on to medical school. Many of those will opt for the rural physicians program, which keeps them in Mississippi after they become M.D.s. I will continue to make as big an impact on the health of Mississippi as I always have. I can have a bigger impact in Congress, where I can work on, among other things, improving mental healthcare in the state. But whatever happens, I’ll keep working for a healthier Mississippi.