Best of Jackson 2018: Community and Culture 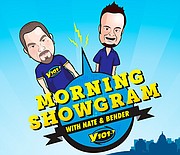 Nate West and Chris Bender of Y101 won Best Radio Personality or Team and Best Radio Station, respectively—and consider themselves "brothers from another mother." The stars of the "Morning Showgram with Nate & Bender" have known each other for 14 years and have been working together on the "Morning Showgram" for the last few months.

"And not to mention how funny Bender is," Nate adds. "I think we're a lot alike, and our attitudes about both the radio and life in general help us feed off of one another."

In Jackson's dance world, Best Dance Group Ballet Magnificat! is one of the most well-known companies. Ballet Magnificat!, which gets its name from the Latin phrase "to magnify him," is a Jackson-based Christian ballet company that Keith and Kathy Thibodeaux founded in 1986. The group has performed all over the United States and around the world.

Keith is a former child actor who played "Little Ricky" on "I Love Lucy" and Johnny Paul on The Andy Griffith Show. Kathy entered the international dance scene by winning a silver medal at the USA International Ballet Competition in 1982. She later became one of the first contracted dancers for the Jackson Ballet Company.

Ballet Magnificat! established its own School of the Arts in 1989, which offers dance classes for all ages and currently has 300 students enrolled. The company also provides a dance curriculum at Belhaven University. —Dustin Cardon

In the 1920s, the State of Mississippi did not have mechanisms in place to preserve the state's natural world, from its wildlife populations to the native plants. Thanks to one woman, Fannye Cook, the state now not only has a gaming and fishing commission, the Mississippi Department of Wildlife, Fisheries and Parks, but it also has a place dedicated to educating the population on the state's natural world: the Mississippi Museum of Natural Science. The museum has exhibits on the state's wildlife such as waterfowl, endangered species and terrestrial habitats, along with aquariums, nature trails and 2,500 square feet of temporary exhibit space.

In "Conservation Quest," the next temporary exhibit, guests can learn about energy, and what it is, where it comes from, how we use it and why we should use it wisely. The exhibit runs from Saturday, Jan. 27, to Sunday, April 29. MMNS is open Monday through Friday from 8 a.m. to 5 p.m., Saturday from 9 a.m. to 5 p.m., and Sunday from 1 p.m. to 5 p.m. For more information, visit mdwfp.com/museum. —Amber Helsel

Learning should never stop, and with programs such as the winner for Best Public Forum or Speaker Series, Millsaps College Arts & Lecture Series, it doesn't have to. Millsaps alumni and volunteers established the Arts & Lecture Series in the mid-1960s as part of a larger community outreach program. The conferences bring together local lecturers, performers, writers, and other artists to discuss topics such as music, literature, current events, history and more. Funding from the Mississippi Arts Commission and the National Endowment for the Arts support the program.

All events in the Arts & Lecture Series take place in the Gertrude C. Ford Academic Complex Recital Hall at 7 p.m., unless otherwise noted. Tickets for each program are $10, and season tickets are also available. For more information, visit millsaps.edu. —Dustin Cardon

New Stage Theatre has been a mainstay in Jackson's theater world since Jane Reid Petty and others founded it in 1965. The theater produced its first season in the winter of 1966 in a church at the corner of Gallatin and Hooker streets. New Stage moved to its present site on Carlisle Street in 1978.

Each year, the theater brings contemporary and classic productions to Jackson. During its current season, New Stage has performed plays such as "And Then There Were None," adapted from the Agatha Christie classic, and Disney's "Beauty & The Beast" on an extended run.

Other programming includes "The Eudora Welty New Plays Series," which features eight contemporary plays about Mississippi or written by Mississippians. "Unframed at New Stage" presents contemporary, edgy material that New Stage normally does not produce on the main stage.

"A Christmas Story: The Musical" is based on director Bob Clark's 1983 classic holiday film "A Christmas Story" about Ralphie Parker and his quest to get an official Red Ryder Carbine-Action 200-Shot Range Model Air Rifle for Christmas.

Pasek and Paul, the songwriting duo behind "Dear Evan Hansen," "The Greatest Showman" and the 2017 Golden Globe and Academy Award-winning "La La Land," created the musical in 2009. —Dustin Cardon

Best Nonprofit winner The Mustard Seed, which was founded in 1981, dedicates itself to meeting spiritual, emotional, physical and intellectual needs of adults with developmental disabilities. Its name comes from the Bible verse, "Truly I tell you, if you have faith as small as a mustard seed, you can say to this mountain, 'Move from here to there,' and it will move."

The organization also has a gift shop on campus, where clients sell mugs, ornaments and more. Proceeds help fund the organization's programming and accounts for 20 percent of The Mustard Seed's annual income. The gift shop is open Monday through Friday from 9 a.m. to 4 p.m., and every second Saturday from 10 a.m. to 3 p.m.

Those who have been here long enough know that we that the state and city has a vibrant, creative community. Luckily, we have outlets such as podcast Let's Talk Jackson to help showcase that talent.

Host Beau York and others such as Chellese Hall have interviewed people such as artist Adrienne Domnick, artist and STEAM (science, technology, engineering, art and mathematics) advocate Anik Kurkjian, photographer Imani Khayyam, and lawyer and beer-law advocate Matthew McLaughlin about their lives, work and more. The podcast airs each Monday.

In the years since Best of Jackson launched, the Mississippi Museum of Art has won or been a finalist in categories, partially because of its dedication to engaging the community in art. These days, MMA might look a little different. In August 2017, the museum took down "The Mississippi Story" exhibit to make way for the bicentennial exhibit "Picturing Mississippi, 1817-2017: Land of Plenty, Pain, and Promise," which features art from 100 artists over the past 200 years.

The museum itself closed to the public to undergo renovations, including ones to The Museum Cafe and The Museum Store. Around December, MMA also announced its Center for Art & Public Exchange, which seeks to create community dialogue through art. The museum is back in action now, and has a full slate of events this year, from classes to monthly events to CAPE events and more. For more information, visit msmuseumart.org. —Amber Helsel