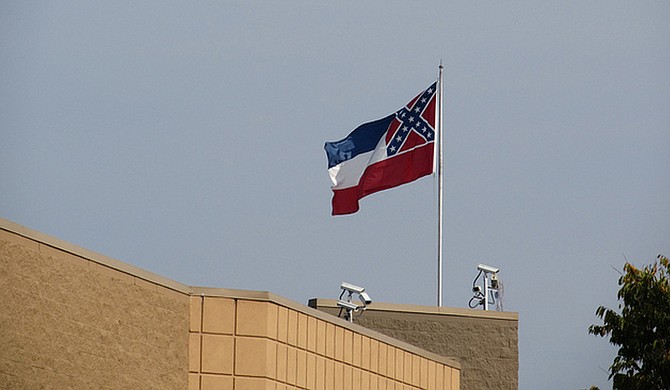 Again, Mississippi has not displayed the best image for the world. State lawmakers won't consider removing the Confederate emblem from the Mississippi state flag this legislative session. There have been many bills filed to bring down the Confederate Flag; however, they all died in committee. This is a prime example of why it is so important to ensure we know the position of the lawmakers in which we elected in office. How can you claim to love God and claim Mississippi is the Bible belt of the South, but also endorse the Confederate emblem, which is the American equivalent of the Nazi symbol? The crimes people have committed under the Confederate banner are horrific. Cloaked individuals in white sheets toting gasoline-soaked crosses in their attempts to terrorize black Americans have carried this banner. Those who have gone into churches to murder innocent African Americans as they praised God have also carried it.

As I have said many times, I wasn't there to witness this for myself, but my grandmother, who lived her entire life in Mississippi, made sure I understood what the Confederate symbol stands for, and I know that many of you were told the same stories as I.

This is why the Confederate symbol must go.

How can lawmakers expect companies to invest in Mississippi when they see that they cannot even unify to remove this blood-stained flag, even though they talk about education, economic development, funding and infrastructure as pressing issues that affect citizens of Mississippi?

How can we expect them to take us seriously? This flag is hurting Mississippi.

To the 13 political leaders who turned their back on this issue when they attended the Southern Legislative Conference on last year: Did attending the conference help to bridge the gap of racial reconciliation? Let me answer this: NO. As I stated many times, racial reconciliation requires action. In this month, Black History Month, once again lawmakers have the opportunity to show the world that Mississippi is honoring those African American lives who were lynched and murdered in Mississippi under that flag. If legislators want to start racial reconciliation and begin the healing process, it starts with action. The action is bringing down the Confederate Flag, which will create a new day for all Mississippians.

In closing, it is important for all Mississippians to put aside agendas and stand on the side of what is right for all. Lawmakers should vote based on what is right and not what they believe. You were elected to represent the people, not your personal views and opinions. This is why it's becoming even more important that each Mississippian become involved in our political process. Demand your seat at the table.

The next generation of Mississippians depends on you to create this change. Enough is enough. We must stand and unify together to create a campaign that will bring down this flag. We will show the world we refuse to hold on to the state's dark past, and we will usher in a new day filled with healing.

Are you with us or against us? I challenge lawmakers to make good on the promise of doing what is right for all Mississippians and join with us to send a message to the world: Mississippi will no longer support symbols of hate.

Duvalier Malone, a Mississippi native, is a Washington, D.C.-based motivational speaker, political consultant and community activist. This column does not necessarily reflect the opinions of the Jackson Free Press.