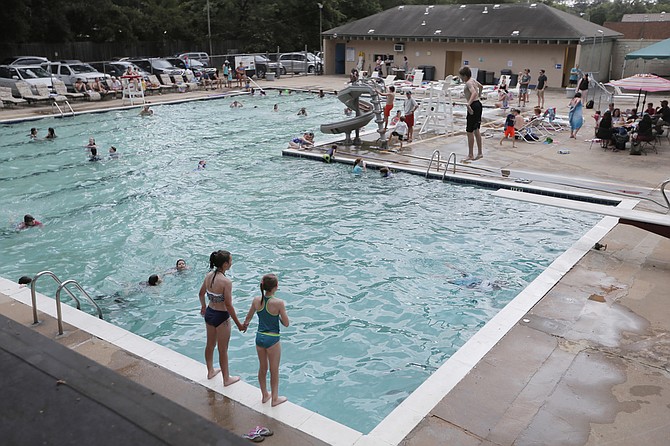 Community members are working with a nonprofit organization, Friends of the Briarwood Pool, to help keep Briarwood Pool open this summer after the YMCA sold the pool, which has been in the community for more than 50 years. Photo by Imani Khayyam.

JACKSON — Nearly 30 children sit in anticipation on the edge of a swimming pool, waiting for the signal.

The announcement comes at 3:10 p.m.: "The Briarwood pool is now open to swim."

A few months ago, this image of young people swimming again in the popular pool seemed elusive, but the surrounding community was determined to make it happen, after the YMCA of Jackson sold it as well as the nearby workout northeast Jackson workout facility at Deville Plaza.

"This year they (YMCA) approached us and asked us if we'd be willing to just take care of the whole pool and just run it ourselves," Jackson resident Wilson Carroll said. "We said, 'we would be willing to do that.'"

Friends of the Briarwood Pool formed four years ago to raise money for expenses including plumbing repairs.

"Hopefully, we will continue to do this year after year. So far it looks good," Eide told the Jackson Free Press.

Briarwood will no longer face restrictions or rules of the YMCA including pool hours and weather requirements. The new pool management team is now writing its own rules, Eide said.

The group wanted to manage the pool, but that responsibility comes with a risk of what could come out of it.

"The great unknown right now is will enough people join that we can afford to do this moving forward," Carroll, an attorney, told the Jackson Free Press.

As the day fought off a prophesied storm, community members could attend informational sessions and sign up for memberships for adults and children and swimming-team spots.

Memberships and classes will keep the pool afloat, Carroll said. The future depends on whether the nonprofit can bring in enough fees.

The pool offers a nostalgic feel for many Jackson residents who learned how to swim at the pool in the more than 50 years it has been open.

"This neighborhood is full of people who grew up here," Carroll said. "There is reservoir of good will out here."

Briarwood Pool Manager Jordan Camp can walk to her parents' house from the pool's front door. They haven't moved since she was a child.

"This is the reason I swam, I became a lifeguard," Camp said. "This pool is not only just a great place, but it also was my childhood."

Camp runs the day-to-day activities at the pool. She handled hiring for the summer in addition to preparations for opening weekend.

"It took a lot of hard work, a lot of volunteers and a lot of dedication, but it has all been paid off," Camp said.

Jackson resident John Sewell, who works for Millsaps College, remembers his own time growing up at the pool. He learned to swim and enjoyed summer days relaxing there, an experience his kids now enjoy.

"Forget all the logistics of who owns what," Sewell said. "The great thing about it (pool) is it hasn't changed in almost 50 years."

Sewell's children have gone through swimming classes, and one of his kids works at Briarwood as a lifeguard. The community is one that looks out for one another especially at the pool, he said.

"We all watch out for each other," Sewell said.

A Labor of Love

Transitioning to community-based control has been a labor of love for the parties involved, which included cleaning up the pool and volunteering time to set it up.

"Being owned by the members, that's going to give us a lot more freedom with what we want to do," Sewell said.

Both adults and kids came out to volunteer on Saturdays to power wash and convert the pool into a summer getaway. "We've been very pleasantly surprised with the amount of support we've gotten so far," Carroll said.

Briarwood Pool will be open from Memorial Day to Labor Day, but Eide says the group is planning to have it stay open later if possible.

"It is so worth it," Sewell said. "My kids will be here every day."