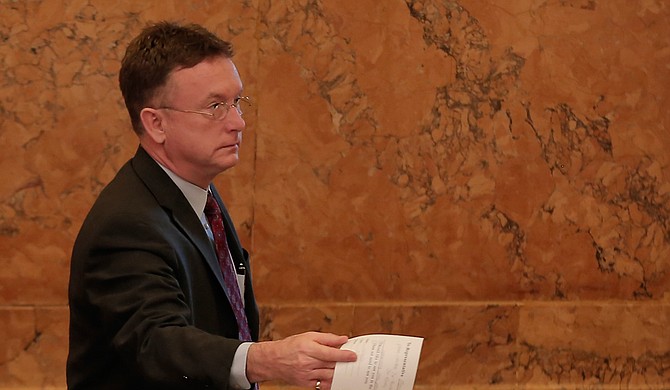 On Tuesday, the Mississippi Legislative Black Caucus issued a statement saying Rep. Karl Oliver's continued presence in the Legislature would impede efforts for lawmakers to work across lines of race and party. Photo by Imani Khayyam.

JACKSON, Miss. (AP) — Black lawmakers in Mississippi are demanding the resignation of a white colleague who said Louisiana leaders should be lynched for removing Confederate monuments.

On Tuesday, the Mississippi Legislative Black Caucus issued a statement saying Oliver's continued presence in the Legislature would impede efforts for lawmakers to work across lines of race and party.

"Rep. Oliver's apology for using the word 'lynching' does not mitigate the sentiment behind the statement and his presence will continue to be a sore spot on the work of the Mississippi Legislature," said Democratic Rep. Sonya Williams Barnes, chairwoman of the Black Caucus.

Fifty-one of Mississippi's 174 state lawmakers are black, and 50 of them are in the caucus. The state's population is 38 percent black.

Oliver made his Facebook post as three Confederate monuments and a monument to white supremacy were removed in New Orleans.

"The destruction of these monuments, erected in the loving memory of our family and fellow Southern Americans, is both heinous and horrific," Oliver wrote. "If the, and I use this term extremely loosely, 'leadership' of Louisiana wishes to, in a Nazi-ish fashion, burn books or destroy historical monuments of OUR HISTORY, they should be LYNCHED! Let it be known, I will do all in my power to prevent this from happening in our State."

Lynching was used in Mississippi and other states not only to kill people by hanging but also to intimidate African-Americans who sought equal treatment under the law.

In a public statement apologizing Monday, Oliver asked for forgiveness and said he regrets his choice of words.

"I acknowledge the word 'lynched' was wrong," Oliver said. "I am very sorry. It is in no way, ever, an appropriate term."

Oliver is a funeral director and first-term lawmaker who represents a district that includes the tiny town of Money, where black teenager Emmett Till was kidnapped before being lynched in 1955, allegedly for whistling at a white woman in a grocery store. Till was from Chicago and was visiting relatives in Mississippi. His disfigured body was pulled from the Tallahatchie River, and his mother held an open-casket funeral in Chicago. Outrage over his lynching helped spark the civil rights movement.