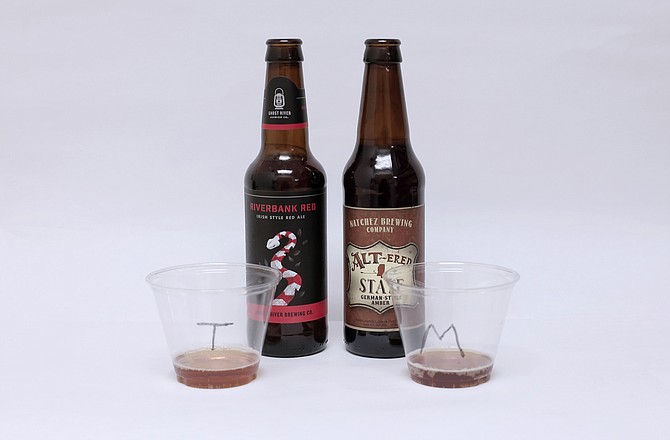 Over the last few years, craft beer has becoming a rising trend. Breweries are popping up all over, and southern states haven't been lost on the trend. Instead of doing a regular beer tasting, the Jackson Free Press staffers decided to compare beers of similar styles from different states. Here are the results of this year's Mississippi v. Tennessee tasting.

German-style amber: Also known as altbier; a style that is traditionally brewed in northern Germany. It's uncommon in the U.S.

Sour, smooth and a little effervescent.

Tangy; slightly bitter on the end.

Orange-y but not too much; light citrus flavor.

Fainter taste than Tennessee one; not strong.

Toasty and malty with some caramel notes.

IPA: also known as India pale ale; most prominent flavor tends to be the hops, which produces the bitter taste some are known for

Imperial IPA: has an extreme hops flavor; more than 7.5 percent alcohol by volume

A sort of light sweetness.

Hoppy but with fruit.

Grapefruit with a sweetness; higher-alcohol burn

Underwhelming. It has potential, but then it just peters out and gets nowhere.

Citrus-y moth balls in my mouth, which is not a good thing.

IPA: also known as India pale ale; most prominent flavor tends to be the hops, which produces the bitter taste some are known for

Has a sort of oatmeal-like taste; more sour aftertaste.

Slightly sour then bitterness on the end that doesn't go away; like 2017 in a glass.

Sweet on the front; surprisingly better than it smells; honey and grapefruit.

Oatmeal stout: oatmeal added to the mash produces the smoothness these beers are known for

What in tarnation? There's a campfire indoors. No, really. Like a campfire—pitch a tent, roast a 'mallow and sit down.

Syrup, but it's sat out too long and soaked up too many things on the plate and got reheated the next day.

Sweet breakfast in a glass—pancakes and oatmeal

Tennessee: Wiseacre Brewing Co. Gotta Get Up to Get Down coffee milk stout

Sweetened coffee; an old friend in an armchair.

A coffee-root beer hybrid; like decaf but watered down.

Espresso; a hint of chocolate; no cream, though.

Sweet breakfast in a mug—coffee and sweetener.