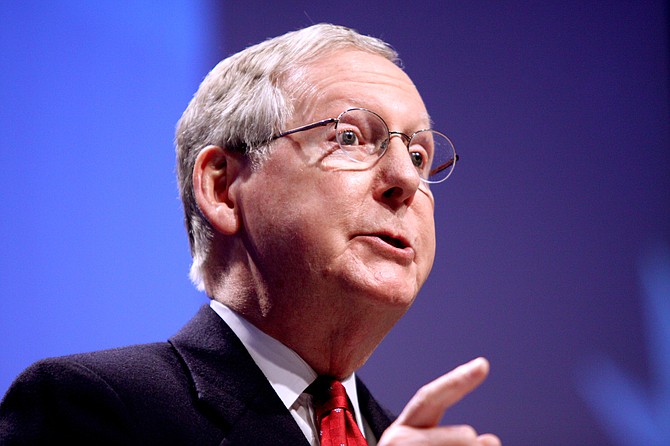 GLASGOW, Ky. (AP) — Senate Majority Leader Mitch McConnell says he plans to produce a fresh bill in about a week scuttling and replacing much of President Barack Obama's health care law. But he's also acknowledging a Plan B if that effort continues to flounder.

"If my side is unable to agree on an adequate replacement, then some kind of action with regard to the private health insurance market must occur," McConnell, R-Ky., said Thursday. It was one of his most explicit concessions that a top priority for President Donald Trump and the entire GOP, erasing much of Obama's landmark 2010 statute, might fall short.

He provided no details during remarks he made at a Rotary Club lunch in a deep-red, conservative rural area of southern Kentucky.

Previously, other Republicans have said that if their broad drive to dismantle much of Obama's law struggled, a smaller bill with quick help for insurers and consumers might be needed. They've said it could include provisions continuing federal payments to insurers that help them contain costs for some low earners and inducements to keep healthy people buying policies — a step that helps curb premiums.

McConnell's comments suggested that to show progress on health care, Republicans controlling the White House and Congress might have to negotiate with Democrats. While the current, wide-ranging GOP health care bill has procedural protections against a Democratic Senate filibuster, a subsequent, narrower measure wouldn't and would take 60 votes to pass. McConnell has said he wants the current bill to pass.

The measure still in play would fail if just three of the 52 Republicans vote no, since all Democrats oppose it. McConnell was forced to cancel a vote on the measure last week after far more Republicans than that objected, and he's been spending the Independence Day recess studying possible changes that might win over GOP dissidents.

"We have an obligation to the American people to try and improve what we currently have. What we do know is the status quo is not sustainable," he said.

In a written statement, Senate Minority Leader Chuck Schumer, D-N.Y., called it encouraging that McConnell had "opened the door to bipartisan solutions." He said the focus should be on continuing the federal payments to insurers, which Trump has threatened to halt.

McConnell's comments came during a recess that has produced no visible evidence that he's winnowed the number of unhappy Republican senators. If anything, the list seemed to have grown this week, as Sen. John Hoeven, R-N.D., said he opposed the bill, but he was vague about changes he'd want.

That brought to at least a dozen the number of GOP senators who've publicly opposed or criticized the legislation, though many are expected to be won over by revisions McConnell is concocting.

Republicans have said Obama's law is failing, citing markets around the country where insurers have pulled out or sharply boosted premiums. Some areas are down to a single insurer.

Democrats acknowledge Obama's law needs changes that would help curb the growth of health care costs. But they say the GOP is exaggerating the problem and note that several insurers have attributed their decisions to stop selling policies in unprofitable areas, in part, to Trump administration indications that it may halt payments to insurers. A federal court has ruled the payments weren't authorized by Congress but has allowed them to temporarily continue.

In its report last week on the Senate bill, the nonpartisan Congressional Budget Office said that under Obama's law, it expected health care markets "to be stable in most areas."

It said the same about the Senate legislation. But it also said under the GOP bill, 22 million added Americans would be uninsured because it would eliminate Obama's tax penalty on people who don't buy coverage and it would cut Medicaid, the health insurance program for the poor, disabled and many nursing home patients.

Earlier Thursday, Sen. Ted Cruz, R-Texas, called the bill's prospects "precarious." On San Antonio's KTSA Radio, Cruz said the GOP's Senate majority "is so narrow, I don't know if we can get it done or not."

"There are people who tell me they are better off" under Obama's law, "and I believe them," Moran said at a town hall meeting Thursday in Palco, Kansas. Moran, who'd previously said he doesn't support the bill, said health care is "almost impossible to solve" with the slim GOP majority in the Senate.

McConnell said he expected to have a new version of the legislation ready in "a week or so." Another Republican, Sen. Pat Toomey of Pennsylvania, suggested it may take longer.

"We're still several weeks away from a vote, I think," Toomey said Wednesday before a live studio audience at WHTM-TV in Harrisburg, Pennsylvania.