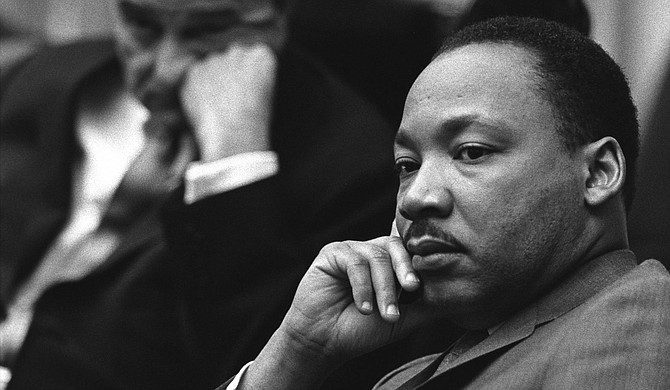 Martin Luther King Jr. was one of the most well-known civil rights activists from the 1950s to his death in 1968. Extremely intelligent, King graduated from high school at the age of 15, but he was still unsure of his true calling. Eventually, he settled on a life of ministry like his father, married Coretta Scott and started a family in Montgomery, Ala.

The minister's youth, enthusiasm for civil rights and newness to Montgomery led the National Association for the Advancement of Colored People to choose King to lead the Montgomery Bus Boycott, the first act of civil disobedience that launched King's sincere efforts toward the cause.

One of his more famous acts was his march from Selma to Montgomery, Ala. On March 7, 1965, policemen with clubs and tear gas drove off the activists, led by King, on the Edmund Pettus Bridge, which sent a message throughout the nation that life for African Americans in the South was not as equal as some wanted to believe.

Despite his physical activism, King's speeches were his most memorable contributions. He spoke with fervor to thousands of people, black and white. His most famous speech, "I Have A Dream," inspired millions of people throughout the country to strive for reform in America. King inspired (and still inspires) people around the nation to fight for equality.

As Americans celebrate his legacy, civil rights leaders and activists are trying to reconcile the transition from the nation's first black president to a president-elect still struggling to connect with most non-white voters.

King's daughter on Monday encouraged Americans to fight for the slain civil rights leader's vision of love and justice "no matter who is in the White House."

In Atlanta, Bernice King addressed more than 2,000 people gathered at her father's Ebenezer Baptist Church four days before Donald Trump's presidential inauguration. She spoke hours before her brother, Martin Luther King III, is scheduled to meet with the president-elect at Trump Tower in New York.

Trump won fewer than 1 out of 10 black voters in November after a campaign of racially charged rhetoric, and tensions have flared anew with his recent criticism of civil rights icon John Lewis, whom the president-elect called "all talk" and "no action."

Bernice King avoided a detailed critique of Trump, but said the nation still has a choice between "chaos and community," as her father once said.

"At the end of the day, the Donald Trumps come and go," Bernice King said. But, she added "we still have to find a way to create" what her father called "the beloved community."

Sen. Bernie Sanders, a failed presidential candidate, brought the Ebenezer assembly to its feet with his reminder that the slain civil rights leader was not just an advocate for racial equality, but a radical proponent for economic justice — a mission that put him at odds with the political establishment.

"If you think governors and senators and mayors were standing up and saying what a great man Dr. King was, read history, because you are sorely mistaken," Sanders roared from the Ebenezer dais.

Sanders, who struggled to attract black voters in his Democratic primary fight with Hillary Clinton, recalled King opposing the Vietnam War as exploiting the poor. He also noted King was assassinated in Memphis, Tennessee, where he'd gone to rally striking sanitation workers, white and black.

Truly honoring King, Sanders said, means bringing that "spirit and courage into the arena in 2017."

Lewis angered Trump when he told NBC's "Meet the Press" that he views Trump as an "illegitimate president" because of alleged Russian interference in the campaign. Trump retorted Saturday on Twitter that Lewis is "all talk" and said his district is "falling apart" and "crime infested."

"Anybody who suggests that John Lewis is all talk and no action needs a lesson in American history," Warnock said. As a young man, Lewis was arrested many times and beaten by authorities as he demonstrated for civil and voting rights for black Americans. Warnock called him "the hero of Bloody Sunday and the conscience of the Congress."

Atlanta Mayor Kasim Reed piled on, quoting Trump when he was in Lewis's district a decade ago to open a Trump Tower project that would later fail. Trump, recalled the mayor, said Atlanta, at least then, was doing "a great job" and he was "glad to be here."

"I don't know what changed," Reed said mockingly before praising Lewis as a personal hero.

Lewis was in Miami at King Day events.

Warnock, meanwhile, praised outgoing President Barack Obama as a model for the office. "Thank you, Barack Obama. I'm sad to see you leave," he said. But, he said, Trump's inauguration will mean "one less brother experiences racial profiling."

Some Republicans have defended Trump's criticism of Lewis, arguing it is inappropriate for a congressman to question an incoming president's legitimacy.

Clara Smith, an Atlanta resident who came Monday to Ebenezer, scoffed at any GOP indignation, remembering that Trump for years questioned whether President Barack Obama was a "natural-born citizen," as required by the Constitution to serve as president.

"He carried on with that knowing full well what he was doing" to the nation's first black president, Smith said.

Smith, 66, recalled joining sit-ins and lunch counters of segregated restaurants in her hometown of Louisville, Kentucky. She said she tries to "ignore" Trump and "his foolishness with the Twitter," but "with everything that's happening around us" she said "we have to pass along that history."

Susan Minsk, 48, came to Ebenezer with her 17-year-old daughter Sophie from Sandy Springs, a Republican-leaning suburb just outside of Atlanta and Lewis's district. As the white mother and daughter waited outside, unsure if they'd be able to get in, Sophie said she worries that Trump's rhetoric will make social tensions worse.

"He just burns so many bridges," she said. "Why make everyone feel more segregated than they do already?"

There are celebrations around the country to honor the slain civil rights leader.

In Memphis, Tennessee, residents of the city where King was killed are honoring his legacy with neighborhood clean-up events and a daylong celebration at the National Civil Rights Museum.

Bicyclists in Detroit have marked the day by pedaling to sites connected to a historic visit the slain civil rights leader made to the city.

About 300 bicyclists participated in Monday's free 10-mile ride, which took in such sites as downtown Detroit's Cobo Center.

The Jackson Free Press contributed to this story.