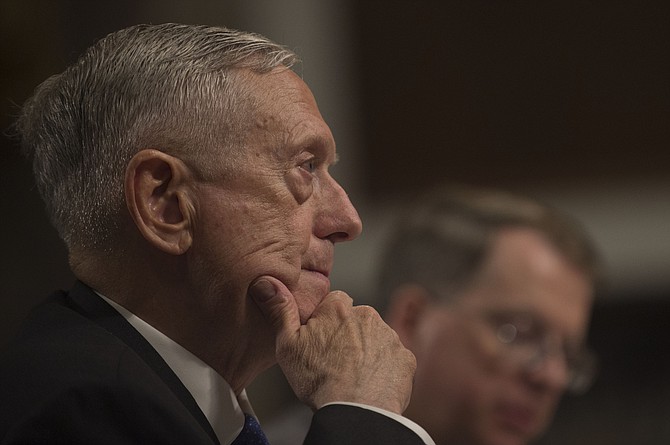 The new guidance is expected to put a stop to recruitment of transgender individuals and prohibit the use of federal funds to pay for sexual reassignment surgery. But it would give Defense Secretary Jim Mattis six months to determine circumstances in which those currently in uniform who are openly transgender might be permitted to continue serving. Photo courtesy Flickr/U.S. Army Sgt. Amber I. Smith

WASHINGTON (AP) — The Pentagon expects to renew a ban on transgender individuals joining the military and to consider circumstances in which some currently serving transgender troops could remain in uniform, officials said Friday.

The new approach would be based on formal guidance the Pentagon is expecting to receive soon from the White House.

The guidance, as described by an official familiar with its contents but not authorized to discuss them publicly, appears to be less rigid than the complete ban that President Donald Trump announced last month in a tweet. Trump had said the federal government "will not accept or allow" transgender individuals to serve "in any capacity" in the military.

Still Fighting at Home: Transgender Veterans Caught in the Flux

The official said the new guidance is expected to put a stop to recruitment of transgender individuals and prohibit the use of federal funds to pay for sexual reassignment surgery. But it would give Defense Secretary Jim Mattis six months to determine circumstances in which those currently in uniform who are openly transgender might be permitted to continue serving. The Wall Street Journal first reported the new guidance Wednesday.

Carter also had given the military services until July 1 of this year to present plans for allowing transgender individuals to join the military. Shortly before that date, Mattis extended the study period to the end of this year. And shortly after that, Trump went to Twitter to announce a total ban, without having used the customary interagency policy process.

At the time of Trump's tweet, the Pentagon was not prepared to change its policy. A flurry of White House meetings ensued, with participation by representatives of the Defense Department, to translate Trump's announcement into guidance that could be implemented and would stand up to expected legal challenges.

Just last week, Mattis suggested he was open to the possibility of allowing some transgender troops to remain in uniform.

"The policy is going to address whether or not transgenders can serve under what conditions, what medical support they require, how much time would they be perhaps non-deployable, leaving others to pick up their share of everything," he said Aug. 14. "There's a host of issues. And I'm learning more about this than I ever thought I would. And it's obviously very complex, including the privacy issues, which we respect."

Estimates of the number of transgender troops in the service vary widely. A Rand Corp. study said roughly 2,500 transgender personnel may be serving in active duty, and 1,500 in the reserves. It estimated only 30 to 130 active-duty troops out of a force of 1.3 million would seek transition-related health care each year. Costs could be $2.4 million to $8.4 million, it estimated.

Among those who have cheered Trump's tweet, Elaine Donnelly said the president is halting "a massive social experiment."

Sen. Tammy Duckworth, an Army combat veteran, said the Pentagon should not exclude people based on gender status.

"If you are willing to risk your life for our country and you can do the job, you should be able to serve — no matter your gender identity or sexual orientation," she said Thursday. "Anything else is not just discriminatory, it is disruptive to our military and it is counterproductive to our national security."