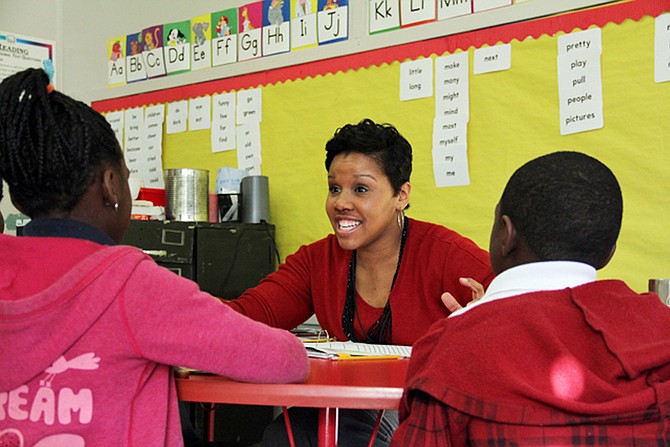 Thousands of Mississippi's third graders will sit in front of computers later this month to take the statewide reading test, but the eyes of teachers and administrators at Finch Elementary School will be intensely focused on a dozen students at this Wilkinson County school.

These 12 students are among about 2,300 across the state who were held back in third grade this school year—out of 39,000 third graders who took the test—because they were unable to pass the statewide standardized reading test last year. Efforts to push students like these 2,300 into literacy represent the central thrust of Mississippi's controversial Literacy-Based Promotion Act, the Third Grade Gate.

Gov. Phil Bryant signed legislation four years ago mandating both that schools hold back students who cannot pass the reading proficiency test and that schools take measures to make sure students get additional services when they are held back. At Finch, those measures took the form of one-on-one instruction, tutoring, daily monitoring, a new third-grade teacher and smaller third-grade classes.

But kids who repeated third grade still have a hurdle to overcome before they move on to fourth grade. The law says that when third graders sit to take the test again—scheduled throughout the state April 17 to 25—those youngsters who were retained last year can be held back a second time if they do not pass the test this go-round.

That should not happen if there is any value to Bryant's idea that holding students back for a year and giving them extra help will improve their literacy—the governor has said he benefitted greatly when he had to repeat third grade. If many of those students fail a second time, however, the state's new initiative could be a huge waste of money.

Last year was the first year that retained students were forced to take the third-grade test again. But state officials did not track how many of those students passed the test or how many were forced to go through third grade a third time, Kymyona Burk, literacy director for the Mississippi Department of Education, said.

"We're happy fewer kids are being held back, but they should track that data to see how well kids are doing (after they are held back)," said Monty Neill, executive director of the National Center for Fair & Open Testing (also known as FairTest), the advocacy group that has long fought against the widespread use of standardized tests.

"In Florida, they found higher test scores in the beginning for the kids who were held back, but the gains dissipated over a few years."

Neill says the fact that fewer kids were retained last year may be a result of improved reading skills, but could also be "because teachers are prepping them better for the test." Mississippi is one of only five states that allow students to be held back a second time when they are unable to pass the test, the Education Commission for the States reported in 2014. The others are Florida, North Carolina, Indiana and Oklahoma.

In schools across Mississippi, teachers are focusing more on teaching basic reading skills in early grades to make sure students are ready to pass the third-grade exam. Many children struggle due to computer unfamiliarity. Photo courtesy Jackie Mader/The Hechinger Report

The third-grade promotion plan has placed immense pressure on everyone in the system, but it is the strain on the little ones that caused many parents and educators across Mississippi to oppose the third-grade gate test in the first place. Sharon Robinson, principal of Finch Elementary, said the high stakes can bring a great deal of stress to students, teachers, administrators and parents, but said they have no choice but to deal with it.

"That's what the state has put in place," Robinson said. "We all just have to rise to the occasion to meet the needs of the children."

When the results of the third-grade test were released last May, Finch had one of the highest failure rates in the state with 44.4 percent of the school's 54 third-graders failing the test the first time they took it. Of the 54 who failed, 42 students avoided repeating third grade by passing the test upon taking it a second or third time over the summer or by receiving a "good cause exemption" because they were in special education.

Robinson said too many of her young students are missing valuable phonemic skills—being able to identify the sound each letter makes—when they first come to Finch in kindergarten. She said the school staff is now concentrating on building a stronger reading foundation before students reach third grade.

Poverty poses a challenge at Finch, where 100 percent of the students qualify for free lunch, Robinson said. In 2015, 52.4 percent of the children under 18 in the county were below the federal poverty level, a rate far higher than the statewide average of 31.8 percent.

Teachers can also attend professional development seminars, provided by the state, to improve their literacy instructional strategies. The free sessions consist of two days of training in both the fall and spring. Burk said approximately 1,400 teachers attended the fall 2016 session—and 12,000 teachers have received the training since Gov. Bryant enacted the Third Grade Gate legislation. This year, for the first time, teachers have access to videos that model effective literacy instruction strategies. They can also sign up for training sessions to help them develop classroom-management strategies to deal with students' behavioral challenges.

Although funding for the Literacy-Based Promotion Act remained static at $15 million, the same amount it received in 2015-16, the state benefitted from a half-million-dollar grant from the W.K. Kellogg Foundation, Jean Cook, spokeswoman for the Mississippi Department of Education, said. (Kellogg is among the many funders of The Hechinger Report.)

In Holmes County in central Mississippi, the district has been paying particular attention to the third graders at William Dean Jr. Elementary, the largest of the county's four elementary schools and the school with the poorest performance on last year's third-grade test. Of the 128 students who took the third-grade test at Dean last year, 42 percent (54 students) failed the initial test and 24 students eventually were held back.

Angel Meeks, superintendent of Holmes County schools, said one of her primary goals this school year is to make sure students repeating third grade are placed in the classrooms of the best third-grade teachers in the district.

"We revamped the schedules to put the best teachers in front of those students," Meeks said.

In addition, the district pulled students out of class for tutorials from certified reading teachers, provided after-school tutorials and offered a Saturday academy for students in grades 3 through 8. These additional services not only help the students repeating third grade but also help the struggling readers among the new third graders. Meeks said the district, which is in the poorest county in Mississippi, a USA Today study found, was able to pay for the additional services out of its federal Title 1 dollars.

Meeks said some of the 24 Dean students who were held back have made "tremendous progress" during the course of this school year, but she said others are still struggling. The superintendent said she had clear evidence last year of the difference a skilled professional can make.   In 2015-16, the principal at Williams-Sullivan Elementary School, a national board-certified reading specialist, worked with the school's only third-grade class on a regular basis and tutored the students who needed extra help. This intervention showed up in the test results, Meeks said: Only 13 percent of the third graders failed last year's reading test, compared to a combined failure average of 34 percent at the three other elementary schools in the district.

Special-education students, many of whom are grappling with reading disabilities, must take the statewide reading test and are included in the pass/fail statistics for each school—although they are exempt from being forced to repeat third grade.

For a school like Warren Central Intermediate, which sits just a few miles from the Mississippi River in the Vicksburg-Warren school district, an unusually large special-education population can skew the results.   Out of the 480 students at Warren Central in grades 3 through 6, about 20 percent are classified as special education—compared to about 12 percent of the students in the state. Of the 130 third graders at Warren Central Intermediate who took the state test last year, 30.8 percent failed. But Principal Tonya Magee said only five students wound up being held back, primarily because so many of the students who failed qualified for the special education exemption.

This school year, the students repeating third grade are pulled out of class for 45 minutes every day to work with a reading tutor. Magee said four of the five have been progressing well enough to likely pass the April test—but one student has been struggling. She added that student may be showing signs of a reading disability.

"We're going to refer that student to the district evaluation team to see what's going on," Magee said.

"But I feel good about the other ones."

What worries Magee is the difficulty too many of her current third graders have taking a test on the computer. Few students have computers at home, so they aren't used to manipulating the mouse.

"When we give them paper and pencil tests, they do better. When we give them computerized tests, they seem to not do so well," Magee said. "What we're seeing is they'll read the passage one time and read the question and then choose an answer instead of going back and rereading, which requires scrolling up and down. The kids are not taking out time to do that."

Magee said she now has enough laptops to allow every child in the school to be able to practice on one. Eventually, she expects that to result in improved test scores.

The Hechinger Report, a nonprofit, independent news organization focused on inequality and innovation in education, produced this story.

CORRECTIONS: In the original version of this story, the numbers of the on-site literacy coaches were wrong. The story has been corrected to reflect the accurate numbers. Also, it is "good cause exemption," not "good faith exemption." The Jackson Free Press apologizes for these errors.