From Guns to HB 1523, The Unalienable Rights of Conviction, Conscience and Free Exercise 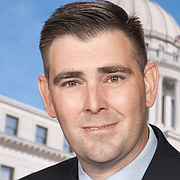 JACKSON — For several years now, I've been involved in crafting legislation that restores state law balance to our Second Amendment right to bear arms. Decades of well-meaning state government laws and agency interpretations had eroded the fundamental liberty of our citizens to carry weapons for self-defense, a right so fundamental that it is given prominence in both our federal and state constitutions.

These state laws, as enforced, made it illegal to carry a gun on one's person unless by permission of a government-issued license. In 2012, for example, the state's concealed-carry law had been interpreted by the state attorney general's office to mean that even a concealed-carry license holder could not allow any part of a weapon to show, lest he/she be punished with state criminal charges. Times and the culture had changed, and fundamental personal freedoms had been lost along the way.

In 2016, I believe we are seeing the same thing happen with respect to our very First Freedoms—the freedoms of conscience and religious liberty.

"[W]e hold it for a fundamental and undeniable truth, that Religion or the duty which we owe to our Creator and the manner of discharging it, can be directed only by reason and conviction, not by force or violence. The Religion then of every man must be left to the conviction and conscience of every man; and it is the right of every man to exercise it as these may dictate. This right is in its nature an unalienable right," James Madison said in 1785 in his "Memorial and Remonstrance against Religious Assessments" address to the Virginia General Assembly.

Do you agree, as do I, with this principle of separation of church and state set forth by James Madison, who has been called the architect of our constitutional form of government? If so, then logically you should also agree with the principle embodied in Mississippi's HB 1523, 2016 Regular Session. Those who take the time to actually read the bill (versus reading what uninformed commentators have said about the bill) will quickly ascertain that this bill makes a clear separation between actions of the state government and actions of state citizens based on personal conviction and conscience.

The bill prevents the state government, or any municipality or state agency from taking discriminatory action against a person for acting or declining to act on the basis of religious or moral conviction. That is the full extent and scope of HB 1523, regardless of what ill-conceived perception may exist. This extremely narrow bill prevents the government from forcing any person to violate their freedom of conscience—nothing more, nothing less.

The stated objections to HB 1523 are that it will allow people to "deny services" to certain people. That is simply not true, unless the specific services requested are related to and would violate a person's sincerely held religious beliefs about marriage or gender. In fact, HB 1523 doesn't mandate that any citizen or entity do or refuse to do anything. It does mandate that the government will not punish citizens or faith-based entities for acting or choosing not to act in accordance with their convictions.

Somewhere along the way in the last decade, many people have come to believe that certain individual rights should be elevated above the freedom of religion and free exercise thereof. But our Nation's founders like James Madison believed and understood that there is no right more sacred than the freedom of conscience. Many of them suffered willingly the loss of many other comforts in order to gain and preserve the freedom of religion, and the protection of that freedom from government-sponsored discrimination.

In 2016, we do face something of a dilemma in our Nation—the collision of two sets of rights: the freedom of religion, on one hand, and same-sex marriage/transgender rights, on the other hand. In many other states, the power of the government (in the form of municipal or state action) has been utilized to punish law-abiding citizens, nonprofits and businesses who simply want to be free to live and conduct operations without violating their conscience. Public employees have been terminated, private businesses have been forced to close, adoption agencies and religious schools have been threatened, and even churches have faced potential loss of tax exemptions. Where will it end?

The good news is that there are ways to balance these conflicts so that everyone's rights are respected and preserved, without sacrificing our First Freedoms; and, that is exactly what HB 1523 does.

Rep. Andy Gipson is a Republican state representative from Braxton since 2008, who presented HB 1523 on the House floor. He chairs the Ethics and Judiciary B committees.