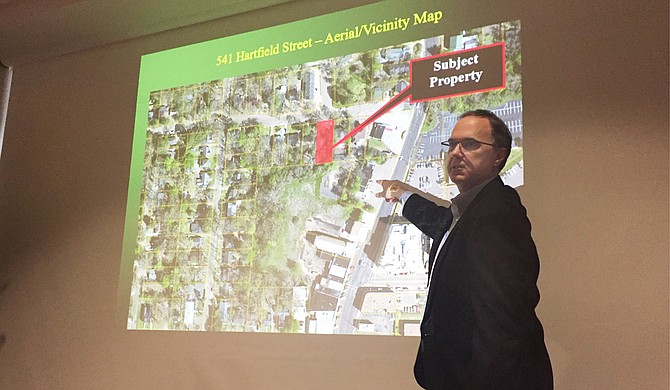 Attorney Robert Hutchison points out the property on Hartfield where the alternative entrance will be for the Jackson Planning Commission. Photo courtesy Tim Summers Jr.

A planned Hampton Inn in Fondren moved a step forward Wednesday when the Jackson Planning Commission approved a land-use permit to allow for a north entranceway just south of Pig and Pint. The move was to address concerns by neighbors about traffic and crime on Hartfield Street.

"Currently, Fondren Hotel Group intends to construct a Hampton Inn immediately to the South of the subject property," attorney Robert Hutchison, representative for the developers, said during his presentation to the board. The hotel at 3111 North State St., between Pig and Pint and Butterfly Yoga, is planned as part of the revamped Whitney Place development plan and is one of two hotels planned.

The entranceway on the property to the west of the Yana Club will serve as an auxiliary entrance for the 111-room hotel, Hutchison explained.

"What we have done is, in order to provide additional access to the hotel, is to purchase a lot on Hartfield, where currently there is a duplex right now, so that we could construct a drive from Hartfield through to the back area of the hotel," Hutchison said. "So this is not only for convenience purposes but also for fire and safety purposes (by) allowing for multiple entrances and access to the property."

Hutchison said the hotel design has the "front door" on the side of the building, away from State Street. "The city wanted that in essence to not have a situation on State Street where cars would be stacking up trying to load people in and out of the hotel. Also, we have provided for retail uses along the ground floor on State Street," he said.

"The design is to develop an attractive entranceway that would be a roadway down the middle of that lot that would have a landscaping buffer on each side and additional parking on the eastside, not towards the residential property on the west," he added.

Originally included in the land-use permit was a requirement for annual review, that Hutchison opposed on behalf of the developers, stating that it might cause issues with the investors.

"I think that will be an obstacle for the developer in regards to financing," Hutchison said. "I would actually ask that we be granted a use permit without the necessity of coming back each year. It simply serves as an entranceway to the adjacent property."

The permit passed without the annual review included.

Stacey Aldridge lives just to the west of the proposed entranceway and voiced several concerns about the plan. "Everything else on the street is residential," Aldridge said. "Right now, I am also concerned that this additional entrance would also become the primary entrance for construction traffic."

With the increase in traffic, and parked cars in the proposed parking lot, Aldridge said that crime might be an issue. "I also have concerns about additional crime in the area with all of the cars that are going to be parked along the east side of this entranceway along with the parking lot behind," Aldridge said. "

"We have a lots of car break-ins in Fondren on a daily basis. All of these cars sitting overnight will just be sitting waiting for criminals to come and break in."

Hutchison responded with reassurances that the entranceway would bring more traffic but that the increase is necessary to ensure access for emergency vehicles.

"There will be an entrance drive adjacent to the hotel on State Street. It is for safety, so fire trucks, ambulances, what have you, have two entrances to the property. Will there be traffic that goes Hartfield instead of State Street? I'm sure there will be some. How much there will be I don't know," Hutchison said.

"One of the reasons we chose this lot is because we wanted to get as close as possible to State Street in order to not go into the residential area. This is the closest access we can have to State Street that gives us additional entrance to the site."

Hutchison maintained that the addition of the hotel to the area would not contribute to the criminal presence. "We are not going to be bringing additional crime," Hutchison said. "We are going to be additional lighting, additional foot traffic, and additional security that if anything will help the security issues on Hartfield and surrounding this development."