Love in a Clever Ruse 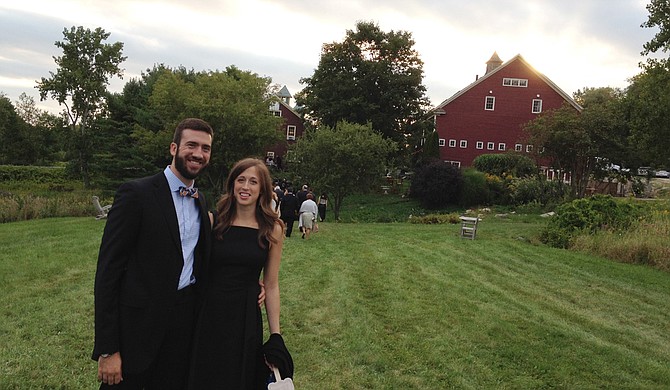 Daniel Zabaldano and Rachel Whaley will get married in Jackson on May 28. Photo courtesy Richard Coupe

Tears streamed down Rachel Whaley's face when she saw Daniel Zabaldano. Clearly, an elaborate ruse had been perpetrated on her, and the reason for it was obvious to even the most casual observer. Text messages sent to her all day long indicated that he was going out with friends to celebrate his birthday in Jackson, and not sitting in Rojo, their favorite restaurant in Birmingham, Ala., wearing a sports coat and holding a large bouquet of flowers. It was a Thursday, and the surprise was complete. As she entered the restaurant, she knew from the expressions on the faces around her that many understood what was about to happen.

Zabaldano, who had been waiting on Whaley for several hours, had not been able to keep his intentions from the restaurant's customers and servers. He was getting restless. A naturally gregarious personality with a lanky, loose-limbed stature and an Italian look to go with his name, he doesn't usually go unnoticed.

Whaley's roommate, complicit in the surprise, ran into trouble luring her away from her studies. Whaley, a tall young woman with light brown hair and a quiet, unassuming personality, was also extremely dedicated to her studies at the McWhorter School of Pharmacy at Samford University in Birmingham and had a big assignment due the next day. She only reluctantly agreed to accompany her roommate to the restaurant—more than an hour past the time Zabaldano had expected them.

That day had been a long time coming, and at one time, Whaley worried that it might never come. The couple met at Mississippi State University in 2010 through a mutual friend, Abel Lowry, who had grown up in Quitman, Miss., with Whaley and was a fellow engineering student with Zabaldano.

"I was a little in awe of Daniel then and never thought he would be interested in me," Whaley says.

They went their separate ways for a while. Zabaldano received a Fulbright scholarship, and he pursued a master's degree in petroleum engineering in Turin, Italy, and Whaley went on to pharmacy school at Samford. Lowry kept in touch with both of them, and when Zabaldano ended up back in Jackson, he talked him into running the half-marathon with him at the Mississippi Blues Marathon in 2013. After finishing the race, Zabaldano told his friend, "I'll never run again." But undeterred, a few weeks later Lowry asked him to train for an upcoming half marathon in the New Orleans Rock 'n' Roll Marathon, which Zabaldano dismissed at once—until Lowry causally mentioned that he was training for the race with Whaley.

Whaley, a naturally graceful athlete, was often in Jackson because her twin sister, Sarah, was in physical therapy school at the University of Mississippi Medical Center. Zabaldano remembers her well from back then and says she made a big first impression on him. Lowry, Whaley and Zabaldano trained together, with the former two in the lead, and Zabaldano trailing behind. Eventually, Whaley tired of dropping hints to Zabaldano and asked him for his phone number.

Soon after, Zabaldano wanted to take a preparatory course for his Engineering in Training exam and decided that Birmingham was the perfect place to do it. He spent four three-day weekends in Birmingham for the EIT exam. Whaley spent that summer in Colorado on the Arkansas River working for a white-water rafting company. Zabaldano convinced his boss that he needed a course in oil reservoir management and that Denver was the best place to take it. Then, Rachel managed to have two of her pharmacy internships in the Jackson area, and their friendship grew and blossomed.

But Zabaldano wasn't ready for any sort of commitment, yet. He was recovering from a previous relationship. He knew that Whaley was the woman for him, but he was worried about being vulnerable again. But the pressure was on, not from Whaley but rather from his friends, who clearly saw how well they complemented each other. This culminated in a confrontation between Zabaldano and one of his oldest friends who, in front of Whaley, threatened to castrate him if he didn't marry her (drinking was involved).

Then, Zabaldano began an elaborate ruse that included going to Quitman, Miss., to ask permission from Whaley's parents, a decision by all involved not to tell her twin ("What one knows the other does also," they said) and careful planning with her roommate.

That brings us back to the restaurant on Feb. 26, 2015, with Whaley sobbing uncontrollably as her roommate pushed her through the door toward her soon-to-be fiance. Zabaldano took her hands and on one knee in front of everyone asked her to marry him.

Zabaldano, a petroleum engineer in Jackson, and Whaley, a pharmacist at Brandon Discount Drugs in Brandon, will marry on May 28.

Daniel Zabaldano is a family friend of writer R.H. Coupe.