Lumumba, Residents on Airport Grab: ‘We’re Not Falling For It’ 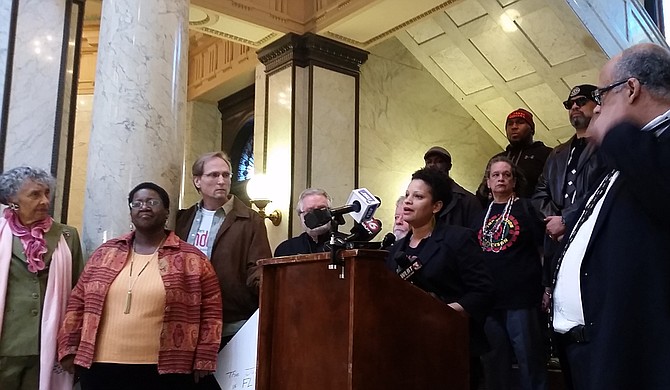 In the Capitol’s veranda, Sacajawea Hall attacks the new airport bill as a seizure of power from the people of Jackson. Photo courtesy Zachary Oren Smith 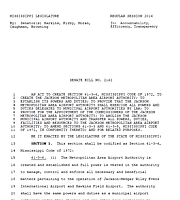 Upward of 30 Jacksonians, fresh off work, gathered inside the Chokwe Lumumba Center for Economic Democracy and Development Monday night on west Capitol Street to protest an attempt by state Republicans to wrest control of the Jackson airport from City of Jackson officials. Several representatives of the group then held a press conference at the Mississippi Capitol this morning to state their opposition.

“This airport is a Jackson investment,” attorney Chokwe Antar Lumumba said after the press conference today. He pushed back on the state lawmakers, including Sen. Josh Harkins, a Rankin County real-estate broker. “They weren’t at the table to invest in it. They weren’t at the table to make that economic push that made it happen. We are not saying that we are not concerned about their interests. We service their interests. Just as we service their interests when people fly into Jackson. They stay, often, in Rankin County hotels, but they don’t give us a place at the table to discuss those revenues, right? This is a much larger conversation. (The bill) is misleading, and we aren’t falling for it.”

The Malcolm X Grassroots Movement, the People’s Assembly and Cooperation Jackson called the Monday night meeting to discuss what hangs in the balance as the Mississippi Senate debates a bill that could change the appointment process for members to the Jackson Municipal Airport Authority board.

Although press was not invited to cover the meeting itself, the Jackson Free Press spoke with Akil Bakari, state coordinator for MXGM, before the meeting started. “If you remove a municipality’s right to control … an economic engine like the Jackson-Medgar Wiley Evers International Airport,” Bakari said, “then you essentially hamstring a municipality that (already) has financial issues as (it) relates to new streams of revenue.”

The International Air Transport Association’s outlook for 2016, published in December, was incredibly optimistic for the North American air transport industry. They projected that based on a “strong U.S. economy, the appreciating U.S. dollar, lower oil prices and a restructured industry” that the North American carriers would lead the industry’s performance.

This was good news for Jackson because the JMAA’s statistics from 2015 showed the airport only topped its previous year’s total passengers once in July by +1.3 percent. In 2015, the airport reported passenger counts were as low as 32,561 in February, a -17 percent decrease from 2014. The passenger total for 2015 was down a dismal 9.7 percent.

Harkins, a Rankin County Republican, told the Jackson Free Press that he wants to bring a wide area of expertise including aviation, business and engineering to the board because a greater level of experience would lead to a generally better performance at the airport. Harkins rejects the idea that the bill is the greedy bid for control that his opposition has made it out to be.

Lumumba pushed back on that statement. “It is misleading to say that (the bill) does not take the power away from the mayor,” Chokwe Antar Lumumba said. “The mayor controls the power of those appointments.” Lumumba unsuccessfully ran for the Jackson mayor’s seat after his father, Mayor Chokwe Lumumba, died in office in 2014.

The mayor currently appoints the five members of the airport’s Jackson Municipal Airport Authority. If the bill is successful, only two of the nine commissioners that compose the new Metropolitan Airport Authority board will come from Jackson (one of which the governor appoints from a list produced by the Jackson City Council). Jackson’s mayor would get only one direct appointment, the governor five and the lieutenant governor one. The board would also include the adjunct general of the Mississippi National Guard and the executive director of the Mississippi Development Authority.

Many residents and organization, including the NAACP, are concerned that a group of white Republicans are trying to take control away from mostly local black city officials. "It leaves us with no other conclusion for the motivation behind this takeover, but race," Mississippi NAACP President Derrick Johnson said last week in a press conference, the day after a JFP cover story on Harkins’ airport bill came out.

Harkins addressed the race issue in an earlier interview with the Jackson Free Press, denying that the decision is racist.

"Some people want to make this a 'we're-taking-this-away-from-the-city-of-Jackson,' or there's even been suggestions that it's racist," Harkins told the Jackson Free Press in previous interviews. "There's no racist connotation to what we're doing here. This is about making the airport the best it can be to serve the citizens of this state.”

Sacajawea Hall said today at the Capitol that the move to take over the airport is another example of wealth and resources being “extracted” out of poor, working-class communities of color.

"(The airport) is another example of how institutions within our economy are based on the bottom line, competition and profit. The control of that is very much in the interests of the people who are already are wealthy, already have resources.”

“[T]hat often means that the people of Jackson are removed from the conversation,” Hall added.

For more stories about the airport “takeover” visit jacksonfreepress.com/airport. Arielle Dreher contributed reporting to this story.