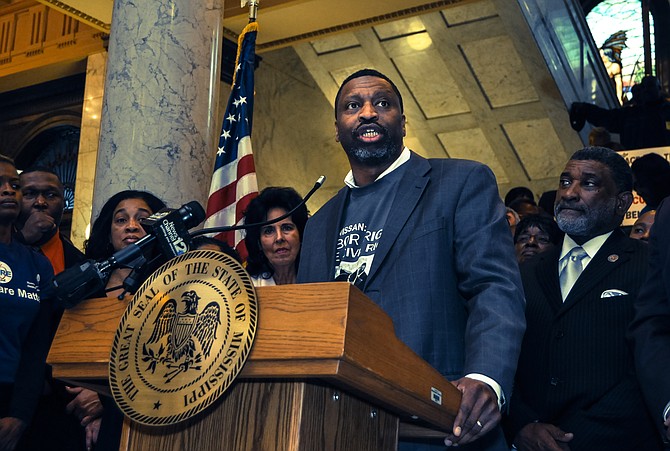 JACKSON — Gov. Phil Bryant signed a bill last week that aims to legalize hatred, once again assuring that his legacy will be one built on hate and discrimination against others.

It is hatred. It is discrimination. And it is consistent with a state and governor who dedicated the month of April as Confederate Heritage Month to elevate and celebrate a heritage rooted in slavery and white supremacy. It is consistent with a state government that allows a symbol of hate and discrimination, the State Flag, to wave over its Capitol.

Gov. Bryant and legislators argued that this law only provides protection to those who want to discriminate against others based upon their "sincerely held religious belief or moral conviction." But this language isn't new.

It mirrors a sincerely held religious belief and moral conviction, once held by many and still held by some that African Americans are only suited for slavery.

The long years of segregation and Jim Crow laws were also based on sincerely held religious belief and moral conviction for many Mississippians.

There was a time when intermarrying between whites and blacks was prohibited because of a sincerely held religious belief and moral conviction by many Mississippians.

There was also a time in this state when many had a sincerely held religious belief and moral conviction that black children and white children couldn't be educated in the same schools.

And now this same language is being used to deny another group of people their basic and legal rights.

Gov. Bryant's proclaiming April Confederate Heritage Month without recognizing and apologizing for the slavery system which was the impetus for the Confederacy, failing to address the hateful symbol, the Rebel Battle flag, embodied in the state flag, signing into law a bill that calls for open discrimination against the LGBT community, and supporting a coming bill that potentially strips women from access to health services - is a repugnant display and a continuing attack on the people of the state of Mississippi.

It is truly troubling to know that Mississippi has yet to learn from its past as it continues to discriminate and try to divide its citizens.

As a group of legal scholars have noted in a jointly signed memorandum, the new law also raises possible issues with the Establishment Clause of the U.S. Constitution. This law will undoubtedly result in Mississippi being engaged in unnecessary litigation costing taxpayers and further diminishing the State's image. Specifically the scholars state: "(w)e share the view of Justice Kennedy when he expressed that 'a bare . . . desire to harm a politically unpopular group cannot constitute a legitimate governmental interest,' and would add that neither can such a desire be justified in the name of religious liberty. HB 1523 presents a conflict with First Amendment religious freedom doctrine by providing for religious exemptions that will meaningfully harm the rights of others, particularly LGBT Mississippians."

This blatant legalization of hatred and discrimination is more than simply a slippery slope. It is yet another stone on a well-trodden path of inequality, intolerance, and injustice.

As Martin Niemoller's poem reminds us, just because the group or community to which you belong is not the one currently under attack does not mean your rights and the rights of those you identify with won't be the next to fall.

The machinery of hate is never satisfied. If Mississippians do not stand together now, there may be no one to stand when the governor makes it legal to hate you.

If we want to pursue a state policy that promotes a sincerely held religious belief and moral conviction I would think it should be to love thy neighbor.

Derrick Johnson is the State President of the Mississippi State Conference NAACP. You can contact him at [email protected] or Follow him at @DJohnsonMSNAACP on Twitter.