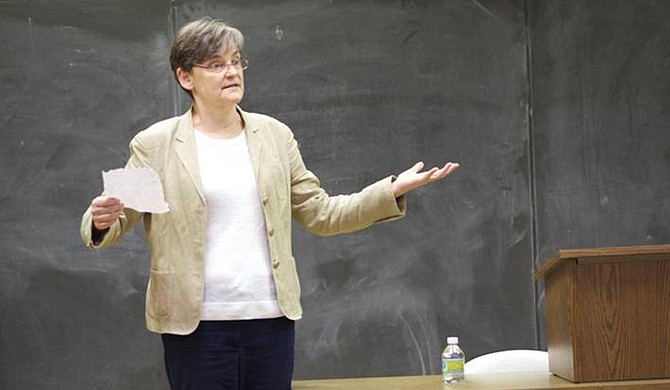 In 1991, MacMaster began working as a professor at Millsaps after teaching as a graduate student at the University of Virginia for five years.

"Nothing prepared me for Millsaps," MacMaster, a Cranford, N.J., native, says. "It was a culture shock. Even though Virginia is the South, it's not the deep, deep South. Twenty-five years ago, Jackson was different than how it is now. Not that it's perfect now, but it was more of a closed society, then."

MacMaster describes incidents of other white people feeling comfortable enough to approach her at random and say racist things at a grocery store or at a swimming pool, or of students using the "n-word" in essays to describe African Americans. Fortunately, she says, it hasn't happened in several years.

For MacMaster, there was never any doubt about which career she would pursue. "For me it was probably just the path of least resistance," she says of her descent into academia. Because of her lifelong love of literature, MacMaster earned a bachelor's degree in English from Rice University, and a master's degree and doctorate degree in English from the University of Virginia.

"It's just what I've done all along," she says. "It seemed to be the next phase."

MacMaster says her favorite thing about being a professor is the opportunity to interact with her students. "The students here are wonderful," she says, "They're not just intellectually curious and passionate, but there's a real sort of innocence and earnestness about (them) here. ... They're really smart but really willing to engage honestly. The students are what keep you here."

At Millsaps, MacMaster teaches courses in subjects such as English and American literature, including a class called "Faulkner, Film and Social Justice," which delves into the author's vision of social justice and his relation to Hollywood. MacMaster has directed the women's and American studies programs, served as the chairperson of the theater department and multiple times on the school's Writing Council, and is currently as the interim chairperson of the English department.

Last month, the Mississippi Humanities Council presented MacMaster with the Humanities Teacher Award. A professor at each institution of higher learning in the state receives the acknowledgement every year and then gives a public lecture. On Oct. 21, MacMaster presented her lecture, entitled "William Faulkner, Jean Toomer and the Double Dealer: Evidence of an Artistic Encounter?", which suggested that Faulkner exhibited an awareness of African-American writers through the New Orleans literary magazine The Double Dealer.

"Interacting with students over literature—it just doesn't get any better than that," MacMaster says. "There's nothing else I want to do besides this. This is what I'd quit my job at a big company, making a lot of money, to go do. This is the thing I get joy from."