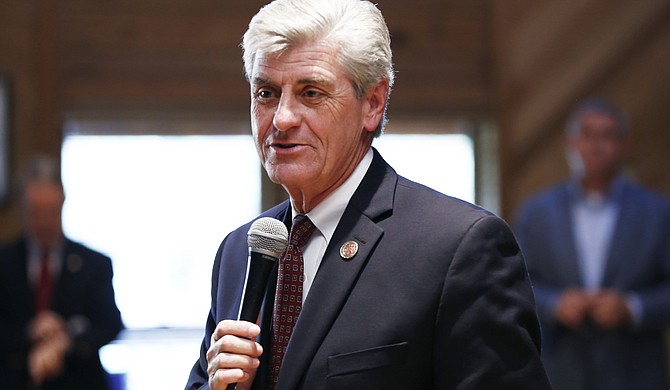 Gov. Phil Bryant spoke at a Republican cook-off and rally on Nov. 2, the day before Mississippians will cast their votes on Nov. 3. Photo by Imani Khayyam.

Gov. Phil Bryant's Democratic challenger, a long-haul truck driver, held a prayer vigil Monday in a park near the Governor's Mansion, with fewer than a dozen people participating.

Speaking to reporters afterward, Gray again criticized Bryant for not expanding Medicaid to help more than 100,000 people. Bryant says he doesn't trust the federal government's promise to pay for most of the expansion, but Gray said Mississippi continues to lag at the bottom of many national health rankings.

"We're the worst state in the nation, and it could have been easily reversed just by him doing what he needs to do," Gray said.

Judie Gray Livingston, the woman who didn't even know her eldest child was running for statewide office before August, said she always thought he'd make a good governor.

"It was always my desire that he would run for governor," Livingston told the Jackson Free Press. "I think that's every mother's (desire)."

Livingston joined her son and daughter, Angela Gray (who is also her big brother's campaign manager), at the prayer vigil for Democratic candidates at Smith Park.

Gray, 56, unexpectedly won the Democratic primary in August to become the party's nominee.

Today, across town, Republicans held a cook-off and rally at the Mississippi Agriculture and Forestry Museum to promote their slate of statewide candidates.

Judie Gray said she prayed for the passage of the school-funding Initiative 42, salary increases for teachers and state employees, and infrastructure upgrades.

"This is a positive thing he's done. There's nothing negative," she told the Jackson Free Press. "He's all about the people of Mississippi wanting to improve."

So far, Bryant has spent $2.7 million on his campaign. His Democratic challenger, truck driver Robert Gray, has spent just over $3,000.

Republican Mike Hurst is trying to block Democrat Jim Hood from winning a fourth term as attorney general. Hurst has spent $861,000 this election, while Hood has spent $1.2 million.

Because few top-of-the-ballot races are considered competitive, Secretary of State Delbert Hosemann said Monday that he worries many voters will stay home.

"You elect your entire Legislature and your governor. I mean, this is pretty important," Hosemann said. "They can tax you, they can put you in prison, they can fix your roads. I mean, it's all right here."

Circuit clerks and election commissioners in six counties around the state—Hancock, Lafayette, Lauderdale, Monroe, Rankin and Washington—said turnout was steady Tuesday morning, and they had not heard of problems with long lines.

Bryant and other top Republicans are trying to defeat Initiative 42, which got on the ballot through a citizens' petition process. It would allow people to sue to seek funding for an "adequate and efficient" system of public schools.

Legislators who oppose 42 placed Alternative Measure 42-A on the ballot, which says the Legislature would establish "effective" public schools "without judicial enforcement."

Speaking to about 150 Republicans at the ag museum on Monday, Bryant said Initiative 42 would be a gift to trial lawyers.

"They won't have to chase ambulances anymore. They can chase school buses," Bryant said to applause from the crowd.

Michael Rejebian, co-manager of the 42 for Better Schools campaign responded in an email: "Right now, it really doesn't matter how many cute one-liners Phil Bryant comes up with. The supporters of Initiative 42 have had enough of empty promises when it comes to public education, and they are taking matters into their own hands on Tuesday."

Rankin County Circuit Clerk Becky Boyd told the Associated Press that her office received many calls before Election Day from people confused about the ballot format with two education proposals, Initiative 42 and Alternative Measure 42-A.

Polls are open from 7 a.m. to 7 p.m., Tuesday, and voters must show a form of government-issued photo identification, such as a driver's license, to cast a ballot.

Associated Press contributed to this story.