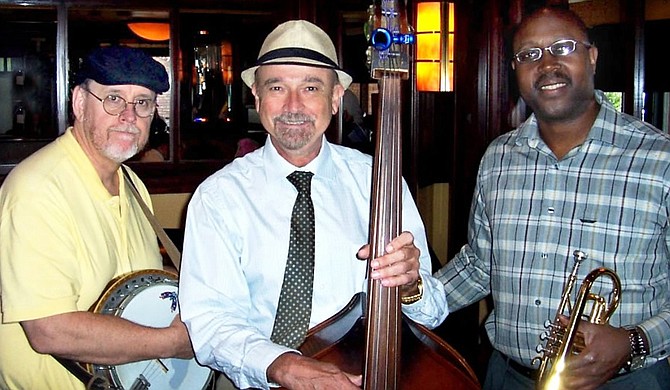 Lagniappe is a popular Louisiana French word for an unexpected gift—the extra donut when you ordered a dozen, the Champagne and roses left in your honeymoon suite, or even finding out that your "bags fly free" when you're checking in with Southwest Airlines. It's that "little something extra" that takes something normal and makes it awesome.

Upright-bassist and singer Bob Pieczyk saw an opportunity to pull a little something extra from New Orleans in the spring of 2011 when Char, a restaurant in Jackson's Highland Village shopping center, needed a band for its Sunday brunch. "I saw the atmosphere of Char and believed that a New Orleans jazz concept would fit perfectly," Pieczyk says.

He recruited local musicians he already knew, including lead vocalist and trumpet player Terry Miller, a fellow member of Jackson jazz outfit The Vamps, in which the musicians have played for 15 years. He also brought in longtime friend, Tim Avalon, a string instructor and master fiddler, on the four-string banjo and vocals.

While all the members of the Big Easy Three call Mississippi home, everything about their sound is a loving tribute to the Crescent City.

"We are very careful to stick to the New Orleans jazz format," Piecyzk says. "It's difficult sometimes because everyone has ideas on new music, but I really want to remain true to the band we are. We offer the same kind of jazz one would hear in New Orleans' French Quarter, without the 100-plus mile drive."

Even the band's name fits its playing style and atmosphere. "New Orleans is the 'City That Care Forgot'—the Big Easy," Pieczyk says. And that's how the musicians want you to feel when you hear them play: happy, relaxed and carefree.

Pieczyk is careful in his classification of the Big Easy Three. The group plays only the traditional New Orleans jazz of the '30s and '40s, which he says is often incorrectly lumped together with second-line and Dixieland jazz. The band's sets often include "When the Saints Go Marching In," Louis Armstrong's "Basin Street Blues" and "Do You Know What it Means to Miss New Orleans."

Since its casual initiation, the Big Easy Three has become an institution in the Jackson music scene, still performing for every Sunday brunch at Char in addition to other live venues such as Underground 119, where the band plays every third Wednesday.

"Char is a wonderful place to play, and I think people really enjoy the acoustic sound we offer, which is very fitting for the relaxing Sunday brunch atmosphere," Pieczyk says. "Underground 119 is more of the type of club you'd find in a big city, but I think our music goes over just as well there as at Char."