An SOS to Black Youth 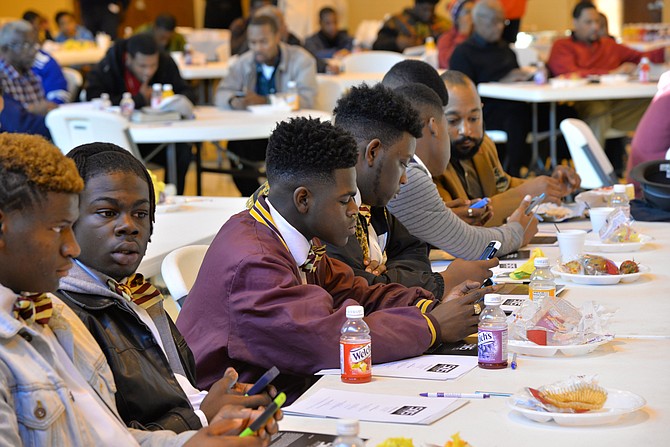 On a recent Saturday at Cade Chapel Missionary Baptist Church, young men met with with local law-enforcement officials about how to best interact with police. Photo courtesy Darek Ashley

With the children's choir behind him on the first Sunday in December, the Rev. Reginald Buckley faced his congregation at Cade Chapel Missionary Baptist Church to get real about the "blessing and burden" of raising black boys.

Buckley first ran through the gamut of black males who made headlines last year in the sanctuary. "I know that as a black male in this country I must take careful precaution, and I must teach my black son how to take those same precautions to keep from being the next headline," the married father of two told the congregation.

The pastor spoke of two 22-year-old men killed because of alleged suspicious behavior with fake weapons. John Crawford was killed in a Beavercreek, Ohio, Walmart because he was supposedly threatening customers with a rifle from the store. Darrien Hunt from Saratoga Springs, Utah, was shot because he was carrying a sword.

As Buckley preached, each victim's name and picture flashed on the two large projection screens that bookend the baptismal pool. Suddenly, he began to weep as the photo of Tamir Rice from Cleveland, Ohio, came up. Police fatally shot Rice, 12, on a playground two seconds after arriving because his toy gun seemed threatening.

Kameron Palmer On Saving Our Sons

"My son is 12 years old," Buckley told those gathered. "When his picture flashed on the screen, I saw my son.

The stories of those victims and others like Levar Jones, Trayvon Martin, Mike Brown and Eric Garner sparked the idea to have a conference that would partner with law enforcement to facilitate conversations to help protect communities of color from such tragedies.

On Jan. 10, 2015, Buckley hosted the first "Saving our Sons Conference" where boys ages 12 to 25 gathered to engage in workshops about healthy choices, lifestyles and relationships. Around 8:30 a.m., David Banner, a renowned rapper from Jackson started the conference with a speech that Buckley's son Jonathan found striking.

"The thing that struck me the most was when he talked about black-on-black crime because that's where the stereotypes come in about us as black people being probably the worst race," said the 7th grader from Hartfield Academy.

Banner seemed to enjoy the conference as well. Later that morning he tweeted, "We had real talk in the church. The young men need the truth."

Other presenters included Jackson Police Chief Lee Vance who talked about "de-escalation strategies," such as respectfully complying with officers' instructions.

"Even if you think that your rights may be violated, on the side of the street during a traffic stop is not the place to have that dispute," Vance said. He also noted that officers are susceptible to civil and criminal lawsuits for misconduct.

Hinds County Sheriff Tyrone Lewis said the workshops really touched the young men because they role-played the incorrect and correct way to handle encounters with officers. "My main message to them was, 'It's not us against them'," Lewis said afterward. "We're trying to be on the same team so we all can have a quality life that we all deserve." Even though law enforcement officials like Vance, Lewis and Capt. Kenneth Brown of the Mississippi Highway Patrol were there to ease fears of brutality, some participants such as Kameron Palmer, a 9th grader from Jackson Academy, said current events can be frightening. "It gets me kind of scared sometimes because we live in a world where some people are going to be racist, and some are not," Palmer said.

In the church gymnasium, filled with only natural light so a video could be shown clearly, Capt. Brown showed a video of Highway Patrol stops entitled "Under Fire: Fast Thinking," which showed a traffic stop gone wrong, resulting in a shooting match.

Then Brown, dressed in his full officer regalia, detailed actions young men should take, such as noticing the officer's name and badge number, listening thoroughly to the reason for the stop, and if things get out of control, calling someone and placing them on speaker phone as a second set of ears.

A group of about 30 young men wearing bowties with a mixture of jackets and cardigans were seated in the first few rows. They were the Kappa League, an auxiliary group of the Jackson Alumni chapter of Kappa Alpha Psi Fraternity. The chairman of the group, Joel D. Swan, sat with the group.

Some of his students gave good reviews, but not all. "Other young men have said they were kind of skeptical, and they just don't trust police officers, even after this, because of situations that they've been into," Swan said afterward. His students have been racially profiled and ignored by police when they needed help. Swan said he has to consistently work with those students to change their mindsets. He said organizations should continue to have events that put young men of color in the same place as law enforcement so they can ask questions and understand how they are perceived.

Buckley said this conference will be the first of many conversations on topics that he has planned throughout the year like "Handling your Emotions," "Taking on Responsibility" and "Becoming a Man."

"Hopefully, the actions will emerge from dialogue," he said. "It's more of a personal movement, making sure that each individual personally comes to an understanding of who he is, of what God has given him, and how that can flourish throughout his life by making the right kinds of choices."

The conference ended as one would assume—with prayer. With the gym full of bowed heads and closed eyes, Buckley prayed for the boys: "Bless them Lord and place your hedge of protection around them. ... Lord, we pray that what we have done here will continue to strengthen the bond between community and law enforcement oh God that we would see peace that we would understand our role and our relationship with each other."