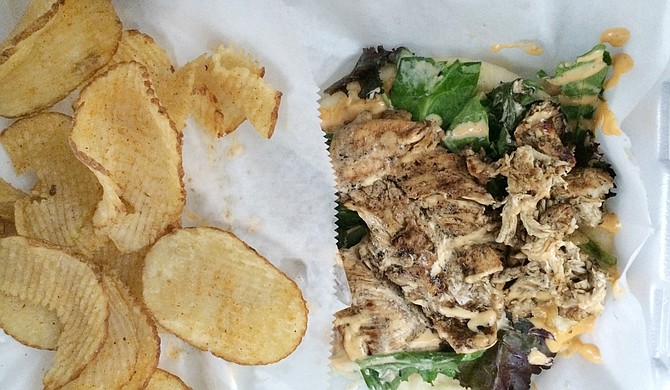 With the new ordinance the Jackson City Council passed this summer, the food-truck scene seems to get bigger every time you turn around. In response to this, the Jackson Free Press is beginning a new occasional series that features food from the different trucks and other mobile-food vendors.

One Guy Steak and Chicken

One Guy Steak and Chicken is a local food truck that creates cuisine with its own take on standard dishes.

Chef and owner Kendrick Gordon uses high-quality meat, ingredients and sauces to create his dishes. Gordon studied at Le Cordon Bleu in Paris, taking courses in areas such as sauces, and started the food truck in 2013.

One dish he makes on the truck is the grilled chicken pita, which is a bed of grilled chicken, lettuce and Gordon's comeback-style sauce on top of pita bread. Patrons can get it with a side of homemade potato chips. The grilled chicken is marinated in Gordon's own marinade, which includes ingredients such as red-wine vinegar and Worcestershire sauce, and he cuts the potatoes into chips, fries them in peanut oil and seasons them with spices such as paprika and cayenne pepper.

Find One Guy Steak and Chicken on Facebook or Instagram to check its daily menu and locations.

Grilled tilapia and a side salad

2 for 7 Kitchen's ever-changing menu consists of the simplest food, but patrons throughout Jackson will find there is something for everyone. Owners Omario and Deandrea Dow-Moore usually keep busy driving from various businesses and events, from Bright Lights, Belhaven Nights on Aug. 15 to lunches at Nucor Steel.

"It's the two of us, and together we have seven kids," Dow-Moore says of the name of the food truck. Their children's ages range between 1 and 17. While Omario keeps busy cooking, Dow-Moore takes orders and chats with the line of customers standing outside. When asked what the best item on the menu is, she says, "It would have to be a tie between the fried catfish sandwich and the loaded fries."

The catfish is lightly breaded, then deep-fried and placed between two pieces of white bread with mayonnaise, tomato, lettuce and pickles. The fries are crinkle-cut and made to order. They are the standard side for most of the menu items; however, customers can get them loaded with your choice of meats such as beef, chicken, or shrimp, cheese, sour cream, jalapenos, and Dow-Moore says that sometimes customers add sauteed onions or bell peppers. The fun thing about 2 for 7 Kitchen is that it can prepare almost anything you want, from burgers to grilled tilapia, so you can have your cake and eat it, too.