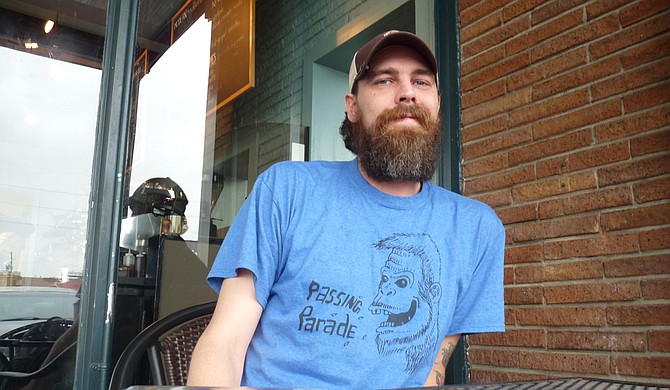 "Osid's a staple in Jackson."

Osid Riley mimics the line with air quotes and a laugh, though he's never agreed to that idea. All the same, many of his friends and colleagues consider him a fixture in the local music scene. He spent years working at two different Bebop Records locations, both of which are now closed, and became acquainted with a lot of Jackson's musician community. Riley now helps manage Comic Commander in Ridgeland and assists in various capacities at Martin's Lounge, which happens to be the site of his latest venture: Free the Local Music.

Even as a teenager, Riley attended many shows in downtown Jackson. "I was underage, but I wasn't drinking, so they would let me in," he says. "I just loved the music. I remember places like The Midnight Sun and the old W.C. Don's off West Street. Anything that was happening was taking place downtown."

Of course now, many of the venues he enjoyed during his teen years are gone, but Riley's fond memories of an even stronger central music scene led him to organize Free the Local Music, a free event to entice music lovers to support downtown venues.

"I love what's happening in Fondren, but I want to bring more notoriety in downtown," he says. "I was at a show at Martin's Lounge, and afterwards, I was talking with (Spacewolf members) Drew (McKercher) and Don (Hawkins) and asking about their next show. It just sort of came out that I would do their next show. I asked (Chris) Rybolt (who books bands for Martin's), and he was cool with it. It just grew from there."

The first Free the Local Music show came in February and brought in well-liked local acts Spacewolf, Cody Cox and Naught, as well as a packed house.

"I know all of those guys, and they are friends, so it was easy to ask them to participate," Riley says.

"I decided to do it on a Wednesday because it just felt right. There's plenty going on for Thursdays, and I didn't want to take away from whatever weekend stuff was going on. Plus, with the shows starting at 8, it's easy for people to come out earlier and enjoy the music. We don't want everyone out too late."

For the next Free the Local Music on Wednesday, April 29, Riley has booked Swamp Babies and Rutabaga Jones with another artist to be announced. But he doesn't see the event being confined to Martin's forever.

"I've already talked to Hal and Mal's, and we're looking at doing things in the Red Room there," he says. "I see this growing into a monthly downtown event for adults."

Riley is already looking ahead to the next event in June, which will include Parallax, Risko Danza and Passing Parade. "These bands are willing to play for free, which is very cool," he says. "They are into the spirit of the thing and really want to get their music out to audiences."