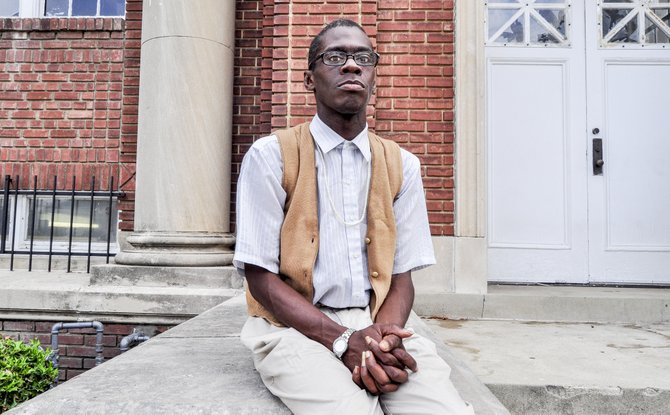 Timothy Randall Lewis, Jr. waits outside of Stewpot on West Capitol street. He hopes to get a meal to eat. Photo by Trip Burns.

Emergency homeless shelters give people in need immediate, although temporary, services—but these could be wiped from the city due to federal and local cuts to the Stewpot ministry.

In a 2013 survey, a homeless census counted 571 homeless people in Hinds County, 195 of which were unsheltered. The two emergency shelters at risk of closure—the Billy Brumfield Shelter and Matt Devenney Emergency Shelter—are located in downtown and midtown Jackson, where much of the homeless population resides.

Executive Director Frank Spencer says Stewpot lost $90,000 in city grants as a result of a reduction from Housing and Urban Development Agency. The organization also lost a direct HUD grant of $50,000 to Matt Devenny Emergency Shelter from HUD and $30,000 in funding from United Way.

"In the month of August we found that all three were not going to fund us anymore," Spencer said.

The total loss represents a $170,000 cut to Stewpot's $1.8 million budget. In a letter to the Hinds County Board of Supervisors, Spencer expressed his concern over the cuts, considering that Stewpot is at continual need of funding to begin with.

Hinds County District 2 Supervisor Darrel McQuirter said that while the board doesn't have a history of funding Stewpot, the organization has come to the board for help, and the board is negotiating an active response. "We are reviewing our budget to consider some funding for them," McQuirter said. "I think they have a very positive ministry, particularly in a community that has some extreme needs."

The City of Jackson, not the county, has taken the lead role in helping sustain Stewpot, McQuirter said.

Spencer has asked for a $100,000 contract from both the City of Jackson and Hinds County each in order to house, feed and assist in finding permanent housing for homeless people in the area.

Although all four of Stewpot's shelters, including Flowers House and Sims House, lost funding this year, Spencer has recommended the closure of two emergency shelters if the organization doesn't acquire a new source of funding.

"HUD has decided that they will not fund the emergency shelters anymore. They're going to fund a group of places they call 'rapid rehousing,'" Spencer said. As a result, he said, Stewpot will not receive funding for their shelters, which they built as a response to community needs.

Rapid rehousing agencies place homeless people in housing and provide services to them while they are in the program "that hopefully will enable them to get housing and food and clothing ... counseling about jobs and medical services," Spencer said.

The difference is, people who are homeless can get immediate shelter at emergency shelters as opposed to working with an agency to be placed in housing. "I think it will be devastating for those who rely on the services from the Stewpot," McQuirter said. "Because of federal funding, state funding and local funding, they're having to make some drastic decisions."

A homeless person's typical stay at an emergency shelter is anywhere from five to 14 days, during which the shelter helps them transition to a more stable living situation.

Another downtown shelter, Gateway Rescue Mission, is a 40-bed facility for homeless men and allows men to stay for 15 nights out of the month on a first-come, first-served basis. Spencer said it is unlikely that the men who will be forced out of Brumfield due to its closure will be able to find openings to take shelter at Gateway. The average age of a homeless person is 43, and the average length of time a person has been homeless is three years.

McQuirter said the Hinds County Board of Supervisors is working with the Stewpot to find additional funding.