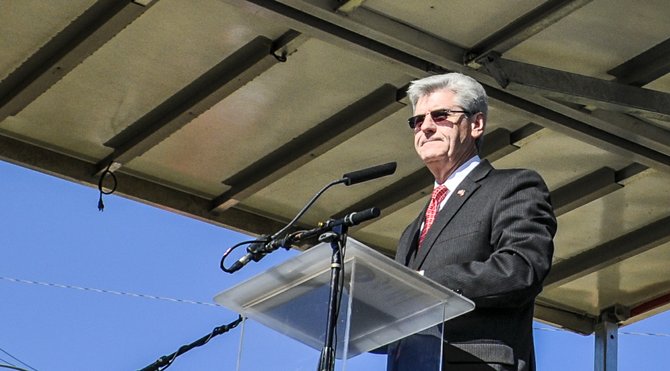 JACKSON, Miss. (AP) — Mississippi Gov. Phil Bryant is intervening in a case involving a woman who wants the state to recognize her same-sex marriage in order to grant a divorce.

The high court said Monday that it would hear the case instead of assigning it to the Court of Appeals. Tuesday, justices approved Bryant's motion to intervene. It's unclear if the court will hear oral arguments or when it might rule.

In 2013, DeSoto County Chancery Judge Mitchell Lundy Jr. ruled that the Mississippi Constitution and statutes prevented him from granting a divorce to Lauren Czekala-Chatham and Dana Ann Melancon.

The women married in San Francisco in 2008 and bought a house in Mississippi before separating in 2010. They could divorce in California, but Czekala-Chatham says she shouldn't be treated differently than straight couples. Melancon objected to the divorce but later agreed to a binding settlement splitting the couple's property even though the divorce was denied.

It's possible the state high court could await guidance from the U.S. Supreme Court. Wesley Hisaw, Czekala-Chatham's lawyer, told The Associated Press Wednesday that the nation's high court may agree to hear Utah's appeal of a ruling striking down that state's ban on gay marriage.

In his own brief, Hisaw cites the 2013 U.S. Supreme Court ruling that struck down part of the federal Defense of Marriage Act. It enabled the federal government to start granting benefits to married same-sex couples.

He argues that the U.S. Constitution requires Mississippi to recognize a legal California marriage, despite another still-standing part of the Defense of Marriage Act that grants states an exemption from such recognition. He also argues that equal protection requirements of the 14th Amendment require recognition.

"The United States Supreme Court's ... decision did not create any new right to enter into same-sex marriage or to require states to recognize same-sex marriages authorized in other jurisdictions," Hood's office wrote.

Bryant argues in part that Mississippi's ban should be upheld because states should be allowed to make their own rules.

"Mississippi is free to define and recognize marriage only as the union of a man and a woman," wrote Kellie Fiedorek of the Alliance Defending Freedom. "To declare otherwise would turn state sovereignty on its head."

Hisaw tries to leave a path for the court to grant Czekala-Chatham a divorce without overturning the gay marriage ban.

He said Wednesday such a limited ruling could lead to Mississippi granting privileges to same-sex couples married elsewhere, even if Mississippi refuses to join them.

Everyday I wake up and hope our governor won't say anything horrible. Everyday I am disappointed.