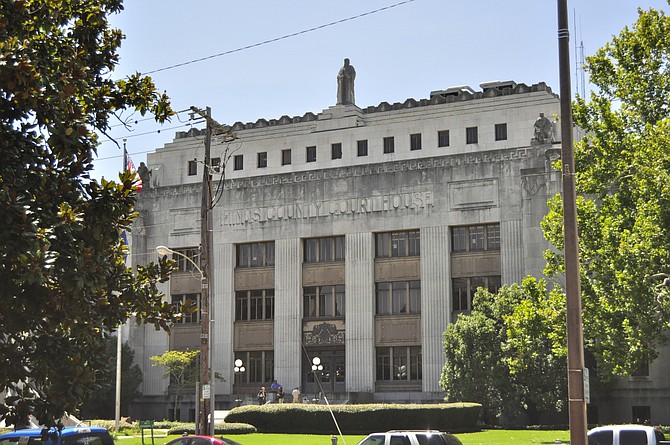 It’s election time in Mississippi. In Hinds County, several seats are up for grabs. Photo by Trip Burns.

As they say, Mississippi likes to elect everyone from dog catcher to governor. That includes judges, who must run every four years. Here's a look at the judicial candidates who will appear on local ballots Nov. 4.

Mississippi Court of Appeals for District 4

The Court of Appeals hears appeals before they are taken to the Mississippi Supreme Court. The 4th district represents the southwest region of the state covering half of Hinds County. The other half of Hinds is covered by the 2nd district.

Carlton also served in the Mississippi House of Representatives for district 100 for three years from 2004-2006.

He received a bachelor's degree in business administration from the University of Mississippi in 1977 and his law degree from Mississippi College in 1980, the same year he was admitted to the Mississippi Bar.

Thomas worked as an attorney for 26 years before his judicial election and served for nine years in the state Senate.  Seat 2

Patricia Wise: Chancery Court 5th District Judge Patricia Wise is running for reelection for the second seat of the 5th district uncontested. She was first elected in 1989 and most recently reelected in 2010.

Wise earned her law degrees from the University of Mississippi and was admitted to the bar in 1984. Before becoming a judge, she specialized in areas of domestic relations, personal injury and general civil practice as partner of Dockins & Wise in Jackson.

Denise Owens: Chancery Court 5th District Judge Denise Owens is running for reelection for the third seat of the 5th district uncontested. She was elected in a special election in 1989 and reelected last in 2010.

Owens received her undergraduate education at Tougaloo College and earned her law degree from George Washington University in 1979 and admitted to the bar the same year. Owens was partner at Owens and Owens and taught as an adjunct professor at Hinds Community College and Jackson State University before she was elected to the court.

William Singletary: Chancery Court 5th District Judge Bill Singletary is running for reelection for the fourth seat of the 5th district uncontested. He was first elected in 1994 and his most recent term began in 2010.

Singletary received his undergraduate education at Mississippi College and his law degree from University of Mississippi and was admitted to the bar in 1977.

Jeff Weill Sr.: Circuit Court 7th District Judge Jeff Weill is running for reelection for the first seat of the 7th district. Weill was elected to the Circuit Court in 2010 after having served as Ward 1 councilman for Jackson City Council.

Weill received his undergraduate education from Michigan State University and his law degree from the University of Mississippi in 1982. He underwent mediation training at Harvard Law School in 2003.

"I've been moving the criminal docket along at an efficient pace, and I believe that's helping to keep people safe," Weill said.

ShamsidDeen has served in the U.S. army, practiced law with his own private firm, and held the editor position at the Jackson Advocate newspaper. He received his undergraduate education at the University of Washington, his law degree from the Cumberland School of Law and his master's degree in public policy and administration from Jackson State University.

Tomie Green: Circuit Court 7th District Judge Tomie Green is running for reelection for the second seat of the 7th district uncontested. Green was first elected to the court in 1999 and her latest term began in 2010.

She serves on the Mississippi House of Representatives from 1993 to 1998 and practiced law with the Jackson firm, Walker, Walker & Green before that. Green earned her bachelor's degree in sociology from Tougaloo College in 1972 and her master's degree in education from Jackson State University in 1976. She received her law degree from Mississippi College School of Law in 1983.

Winston Kidd: Circuit Court 7th District Judge Winston Kidd is running for reelection for the third seat of the 7th district uncontested. Winston was first appointed to the seat by Gov. Ronnie Musgrove in 2000 and was elected the next year.

William Gowan: Circuit Court 7th District Judge William Gowan is running for reelection for the third seat of the 7th district uncontested. He was appointed in 2008 by the Mississippi Supreme Court and then elected in 2010 after defeating Malcolm Harrison in the general election.

Gowan has a long history of serving Hinds County in an official capacity. He was the assistant city prosecutor and then city prosecutor for Jackson from 1978 to 1994. He went on to work as the assistant city attorney until 1998. After that he worked as a temporary judge for Hinds County Court as appointed by the Governor—both Gov. Musgrove and Gov. Barbour appointed him in the 2000s. Gowan attended the University of Mississippi where he received a bachelor's in business administration, as well as his law degree.

Priester served for almost three years as a Jackson municipal judge. From 1985 to 1987, he worked as a special assistant attorney general with health law assignments. After that, he opened a private practice. Priester earned his bachelor's degree in secondary education and a Master of Education degree from Boston University. He received his law degree from University of Texas Law School.

"I'm qualified. I believe I'm the best candidate for the job. ... All a candidate is allowed to say is 'I'm going to uphold the law,'" Burton said, citing ethics and election laws.

"I have learned to appreciate the complexities of our legal system and its dependence upon impartiality," Campbell said.

Henry C. Clay, III: A current municipal judge for Jackson, Henry C. Clay is running for County Court 2nd District seat 2. He ran for the same seat he seeks now and was defeated in 2010.

The Jackson native has served as a judge for the city for 20 years. Clay received his undergraduate education at Millsaps College in 1980. He earned his law degree from the University of Mississippi in 1983. After law school, Clay worked in various divisions of the Mississippi Attorney General's Office for eight years, interrupted by a one-year stint as an assistant district attorney with the Hinds County District Attorney's Office.

Clayton has been a municipal court judge for six years and has owned the Law Office of Bridgett M. Clayton where she has practiced as an attorney for 18 years. She received her undergraduate education at University of Mississippi, her Juris Doctorate from Mississippi College Law School.

"I am willing to serve as Hinds County Judge because it will enable me to serve as a mentor and role model for area youth," Clayton said.

In 1998, Bill graduated from Mississippi College School of Law. In January of 2000, Bill opened his own law practice, Skinner & Associates, LLC, in Raymond. Bill's primary practice was Family Law and Involuntary Drug and Alcohol Committals.

"I'm not a stranger to this district and I've formed a relationship and developed a trust with those living in the district and county. Because juveniles make up a large percentage of our crime statistic I have made it my mission to be an advocate for rehabilitating our youth," Skinner said on WAPTV.

Malcolm O. Harrison: A partner of the Jackson firm Harrison & Flowers, PLLC, Malcolm O. Harrison is running for the third County Court seat. Harrison served as a judge on the Circuit Court 7th District after being appointed in 2009, but was defeated during his reelection in 2010.

Since he was elected in 1999, Harrison has served as a prosecuting attorney for Hinds County.

Harrison studied undergrad at Jackson State University, graduating in 1991 then got his Juris Doctorate from Cumberland School of Law at Samford University in 1994.

"I believe we need judges who are committed to justice for all. ... I've made a difference, and I can make a difference as the next judge in Hinds County," McDaniels said on WAPT.