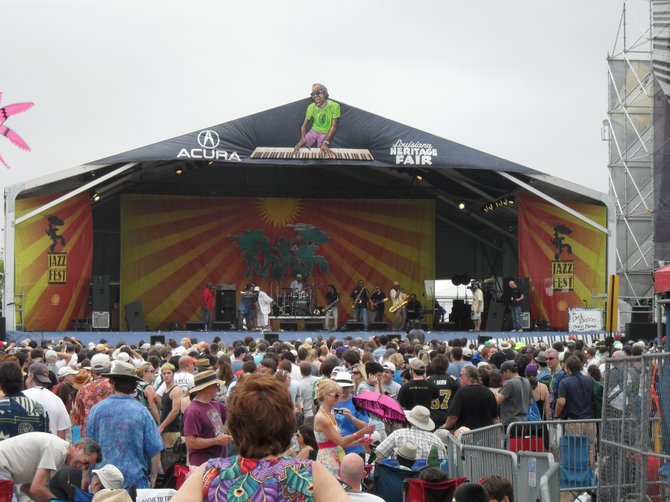 If festivals weren’t already enough fun, here is a game you can play throughout the fest days. Photo by Tommy Burton

Warm weather has finally arrived, and that means it's that time of year: music festivals. Two weekends of the New Orleans Jazz & Heritage Festival just passed, as well as the Beale Street Music Festival in Memphis. Regionally, Hangout Music Fest, Wakarusa Music Festival and Bonnaroo Music and Arts Festival are approaching. An abundance of festivals, both small and larger, will also take place in Jackson over the next few months. Soul City Showcase, WellsFest, Jackson Rhythm and Blues Festival and Bright Lights, Belhaven Nights are just a few.

These events offer plenty of live music and good food. In celebration of the festival season, I have come up with a little game you and your friends can play while people watching.

The concept is simple enough: See how many points you can score while cruising the festival grounds. For every one of the following people you spot, reward yourself the allotted points. Think of it as a glorified version of "I Spy."

There's always at least one. She can usually be seen wearing a long dress, oversized sunglasses and Birkenstocks. The Dancing Hippie Girl always has her head down, her arms up and her hips in constant motion to the music.

You'll know him by his ironic or indie rock band T-shirt, glasses and flip-flops. Score an extra two points if The Hipster has a beard covering his neck.

These guys are usually standing side by side. Inevitably, they high-five each other when the performer plays the big hit songs.

This group of five or more has staked its claim on the festival grounds and allows no one to invade the protected borders of the edge of its blanket. Give yourself an extra two points if you know the crew has held that same spot for several years.

This one explains itself. You'll know it when you see it. These points are usually scored while heading for the exits.

It doesn't matter how much you love the performer you drove 200 miles to see. This person will see to it that you have the most miserable concert experience of your life as you struggle to hear amidst his or her booming voice.

This person not only attends every festival you also happen to be at, but he or she knows the words to every song and can't help but sing along.

• The Lumineers or Moon Taxi (20 points)

If you're attending a festival, one of these bands will likely be there.

In the case of a tie, take a look in the mirror. If you are one of these people, give yourself an extra 100 points.

Of course, these are mere suggestions. Add your own to the list and expand the game. No cheating allowed.

Have a safe and happy festival season, and make sure to enjoy some live music.